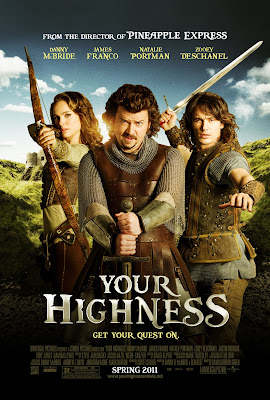 David Gordon Green was once set to become the next Terrence Malick. His sober dramas of lower or middle class Americana (George Washington, Snow Angels, etc) were some of the finest examples of character-driven drama to come out of the last several years of independent cinema. Now the man seems stuck in a world where pointless brainless marijuana jokes and gay panic humor rules the day. Your Highness is fatally-stymied by a script by Ben Best and star Dannie McBride that still thinks that smoking weed is inherently funny, the 'f-word' is by-itself comic gold, and homosexuality is automatically repulsive. There are moments of successfully-ripping satire of 80s medieval action pictures, but (pardon the pun) higher aspirations go up in smoke.

A token amount of plot: Prince Fabious (James Franco) has rescued Belladonna (Zooey Deschanel) from the clutches of the evil sorcerer Leezer (Justin Theroux), who abducted her as an infant and planned to ravage her on the night of the twin moons to bring about an ancient prophecy. But happiness is short lived, as Leezer successfully snatches Belladonna right back on Fabious and Belladonna’s wedding day. Fabious’s under-achieving pothead brother Thadeous (Danny McBride) is forced to accompany his brother and the knights on their quest to rescue the would-be bride. As Thadeous fumbles his way along the quest, issues of sibling rivalry and loyalty rear their ugly heads. Can Thadeous rise to the occasion and make his family proud? Will they rescue the damsel before she becomes part of an evil prophecy? And just who is the mysterious Isabel (Natalie Portman), and just whose side is this fierce warrior on?

First and foremost, the film looks pretty terrific. While the tone is obviously cheeky, the production design does not skimp on bringing this medieval world to life. The color palette is rich and vibrant, and the action scenes are genuinely engaging. And like the most successful action pictures, there are just enough heroes and villains to keep our rooting interest during the climax of the picture. Ironically, the film works best when it plays it straight. The picture works as a straight-ahead medieval adventure film, and its funniest moments are simply when the film goes through the genre motions with just a bit of a knowing wink or acknowledgment.

David Gordon Green is not afraid to take the story seriously when it is needed, and some of the better scenes are those that take the time to establish the genuine and loving relationship between the two princes. Unfortunately, the picture too often grinds to a halt for an extended moment of Danny McBride attempting to be funny, most of which eventually default into dime-store juvenility. And even some of the better jokes are undone by a creeping homophobia and/or reliance on gay panic humor. The film also relies far too much on the alleged comic impact of someone saying the 'f-word' in a medieval adventure context. When the film merely trusts itself to find the inherent humor in its own narrative, it more or less works.

James Franco more-or-less plays it straight, but his overly righteous adventurer gets laughs purely through his self-seriousness. The same applies to Natalie Portman. The movie refreshingly finds little humor in the mere idea of a bad-ass female warrior, but instead allows Portman to earn subtle yucks through the sheer single-minded ferocity of her vengeance-seeking ways (she has her own vividly gruesome ideas about 'what is best in life'). And Portman does plunge headfirst into the absurdity, relishing the opportunity to play a full-blown action hero.

Unfortunately, Zooey Deschanel is stranded with little to do other than play a damsel-in-distress. Her one amusing moment, where she debates her captor regarding the accuracy of the prophecy, is undercut by allowing Leezer to get the last laugh. While Deschanel probably did this glorified cameo as a favor to the director (she played a lead in All the Real Girls several years back), it is easy to see why she has recently decided to flee to television. McBride himself works best when he’s trying the least, as his offhand deadpan reactions to the fantastical absurdities around him do win laughs. The rest of the cast (Charles Dance, Toby Jones, Damien Lewis, etc) do what they can with a script that gives most of the 'fun stuff' to McBride, Portman, and Franco.

Still, my qualms about the sophomoric digressions aside, the film delivers what it promises. Your Highness works as an old-fashioned sword-and-sorcery adventure delivered with a knowing and gentle mockery. Portman is obviously having a blast with the stone-faced hacking-and-slashing, and James Franco delivers a surprisingly warm and sympathetic turn as the righteous rescuer. When David Gordon Green and star Danny McBride simply allow the story to be told, the film works. It is only the extended riffs, that add nothing and earn few laughs, that prevents the movie from reaching its genuine potential. Ironically, Your Highness works more as an gently observant but-straight ahead homage to the fantasy epics of the early 1980s than it does as an overtly bawdy comedy. But the film is not unentertaining and not boring. Frankly, I just wish it had the courage of its convictions.

Charles Dunce? Is that a Freudian slip?

Not anymore, it's not! Thanks for catching that.

Not anymore, it's not! Thanks for catching that.

The film would have been better if McBride wouldn’t have been in it. I never bothered to see this in theaters because it just didn’t look like a good movie. I just now finally decided to watch it when I saw it was on HBO’s page of DISH online. I agree with you that James Franco and Natalie Portman were great in the movie, most of my laughs came from them and Zooey, but McBride, didn’t’ add anything really positive to the movie. Maybe it would have been different if it wasn’t the same comedy regurgitated into yet another move that tries to spoof something. Even the movie nerd that I work with at DISH that watches every movie ever made didn’t like this movie, usually he is all about McBride shows.