Review: ATM (2012) is a lean genre exercise that does its business and sprints. 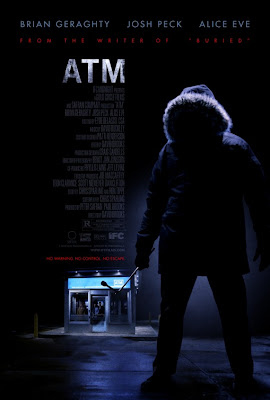 ATM isn't high art and it's not even great trash.  But it has a clever set-up, somewhat relatable characters, and a lean efficiency that I frankly admired.  This is a movie that does exactly what it sets out to do and then gets the hell outta Dodge.  It is too short to wear out its welcome, and director David Brooks gets a surprising scope out what is basically a single-location horror picture.  While the main characters are not quite as smart as they should be, the film operates less on watching how they react to the core conflict but more on making we, the audience, ask what we would do if confronted by the specific situation.  On that note, it is a moderate success.

The plot is pretty simple.  Three young people (Alice Eve, Brian Geraughty, and Josh Peck) end up traveling together after a late night at work and find themselves inside a large enclosed ATM.  No sooner to they arrive do they notice a mysterious hooded man who seems to be watching them from a safe distance.  Barely moving and not speaking, this hooded man is merely watching... waiting.  Perceived creepiness turns into outright terror and panic when the mysterious watcher escalates the stakes and sheds blood.  Now these three people are trapped together with no plausible means of escape.  That's all you get because that's all you need.  The last hour or so of the film is an extended cat-and-mouse romp, as our three would-be heroes attempt to distract, deflect, or otherwise defeat the violent stranger before he kills them all.

Unlike a number of small-scale real-world horror movies, ATM doesn't stretch its admittedly thin premise past the breaking point.  The film runs just 82 minutes plus credits, which is, for example, 25 minutes shorter than the endlessly tiresome Shuttle from a few years back.  Point being, the film overcomes its inefficiencies through sheer force of speed, barreling through its three acts with just enough compelling dialogue stretches and genuine plot twists to keep one entertained.  The film climaxes not with a bracing shocker ending but rather with a fitfully amusing denouement that adds context to the proceedings without invalidating all that came before.  And since the film has the decency to end before it wears out its welcome, I'll do the same for this review.