Review: The Bourne Legacy (2012) not only fails to reboot the franchise but retroactively poisons what came before. 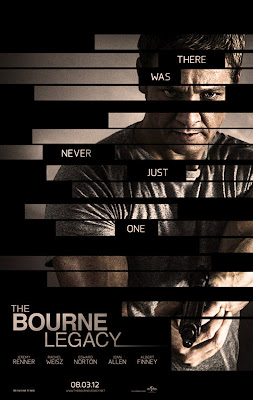 by Scott Mendelson
While Tony Gilroy's The Bourne Legacy is being touted as a spin-off from the Matt Damon-starring spy franchise, it actually functions more as a retroactive prequel.  Rather than expanding the story or going off in a different direction, it spends an unholy amount of its screen time explicitly explaining the history and science behind a completely different 'super assassin' program from the one that once bred Jason Bourne (imagine if The Phantom Menace was primarily *about* midichlorians).  Instead of telling a story of relevance or creating interesting characters that happen to exist in the world established by Doug Liman and Paul Greengrass (and of course stemming from Robert Ludlam's original novels), Tony Gilroy takes a proverbial pick-axe to the series, undoing much of the prior narrative while retroactively turning Jason Bourne (of course played by Matt Damon and occasionally seen here in still photographs) into not a conflicted anti-hero but a force of chaos.  All of this would be forgivable and possibly intriguing if the resulting film weren't so bloody dull and unengaging.  But The Bourne Legacy makes me want to apologize for every mean thing I ever said about The Bourne Ultimatum.  The third film may have been a dumbed-down and amped-up remake of the superb Bourne Supremacy, but it at least had a pulse and sheer entertainment value.  The Bourne Legacy makes one yearn for the comparatively high-quality thrills and chills of Alex Rider: Operation Stormbreaker.

The plot is insanely cryptic yet deceptively simple.  Following the events of The Bourne Supremacy, the various super-awesome assassin programs are being shut down by the nefarious Edward Norton.  As a side effect, the various super-awesome assassins are being systematically eliminated. Order 66 is carried out with minimal fuss, but one of the experimental killers (Jeremy Renner) escapes and finds his way back to the home of his favorite doctor, played by Rachel Weisz.  They eventually end up on the run together, enjoined in an epic journey of a junkie going through hell-and-high water to get his fix.  I'm not kidding.  The entire 'forward narrative' of this picture is charisma-free Jeremy Renner dragging tag-along girl Weisz to various foreign locales in order to get the pills he thinks he needs to stay full-on Jedi.  Alas the film never commits to the Flowers for Algernon-esque concept, as there is both no urgency in his quest for drugs nor any real belief that he might not get them.  The secondary plot initially deals with various Washington bureaucrats dealing with the aftermath of Jason Bourne's umm... world-threatening actions (?) in the second film.  Never mind how little sense that makes (more on that later), the B-plot eventually devolves into Ed Norton and a few other solid character actors (Donna Murphy, Corey Stoll, Stacey Keach, etc.) staring at surveillance screens and discovering what we just saw Renner and Weisz do five minutes earlier. Much of the final hour of the film involves us watching Renner and Weisz buy an airline ticket, glance at a newspaper, and/or check into a hotel, immediately followed by scenes of Norton and company discovering via high-tech surveillance that Not-Bourne and Tag-Along Girl have bought an airline ticket, glanced at a newspaper, and/or checked into a hotel.  If that sounds riveting, it's only because I'm a terrific writer.

Aside from the fact that there is almost no action in this film, and putting aside that the final set-piece is a hodgepodge of random chase cliches that feels arbitrarily inserted into the film because "It's a Bourne film, there needs to be a big chase at the end!", and ignoring the fact that not a single character exudes anything resembling charisma (I have no quarrel with Renner in films like The Town or Mission: Impossible: Ghost Protocol, but he's dry-wood bland here), the film takes a bizarre view of the prior trilogy, which in light of Gilroy's falling out with Matt Damon and Paul Greengrass plays like an intentional bit of retroactive sabotage.    While the first two films played Jason Bourne as a tragic anti-hero and the third film tried to sell Bourne: The Avenging Angel, this fourth film treats Jason Bourne as a shadowy figure whose presence caused nothing but death and misery.  Without going into details, the body count is pretty high this time around, with Renner killing more people than Jason Bourne killed in the first three films combined and the evil government operatives shedding quite a bit of blood in the name of keeping the lid on Bourne (there is one extended moment of sustained brutal violence that, while among the film's best scenes, may raise eyebrows in light of recent news events).  And the film bends over backwards to basically rewrite the finale of the last film, despite the revisionism requiring us (and certain major characters) to ignore the whole 'Brian Cox confessed everything on tape in Bourne Supremacy!' bit.  This is all speculation, but whether or not Gilroy intentionally rewrote history in order to make the first three films less enjoyable on a rewatch (think the prologue of Austin Powers: The Spy Who Shagged Me where we learn that Elizabeth Hurley was a robot assassin during the whole prior film), the end result is that we're left with a world that would be better off if Jason Bourne had never been rescued at sea in the first place.

But even if we ignore what amounts to a conspiracy theory, the film as it stands is a dreadfully bland and generic motion picture, with neither an interesting hero in Renner or any worthwhile antagonist.  Norton is fine, but he's just an upper-level bureaucrat.  The film laughably introduces a scary silent foe (Louis Ozawa Changchien) at the last minute purely so that Not-Bourne and his gal-pal will have someone to chase them through the crowded city streets. Weisz's best moment comes around the halfway mark, a conversational piece between her and a few agents which in turn leads to the one decent action sequence.  But otherwise, Weisz is just a pretty face, with less to do here than even her mainstream debut in Chain Reaction back in 1996 (where she played tag-along girl to Keanu Reeves).  The film's first half has almost no action, substituting moments of violence for actual suspense and/or tension.  The second half expects us to empathize as Renner desperately tries to get the magic pills that the picture spends much of its hour explaining in detail.  And at a pivotal moment late in the game, Renner's Aaron Cross loses sympathy by viciously snapping the neck of an innocent security guard (and possibly killing a few others) who was correctly inquiring why Renner broke into his factory.  The picture is an inexcusably long 135 minutes, astonishing considering how little story is told and how little of consequence happens.  Perhaps in yet another example of 'franchise building', the film has no real climax for our protagonist and no arc of any kind for any of its characters.  I guess we'll have to wait for The Bourne Ad Nauseam for things like character development and forward momentum.

The best thing I can say about the film is that it discards the choppy editing style of the Paul Greengrass sequels in favor of longer and more fluid takes favored by The Bourne Identity.  But otherwise it is nearly a complete wash.  The Bourne Legacy trades in narrative confusion to disguise the fact that nothing is happening.  It has no weight whatsoever on its own and depends entirely on the prior trilogy for any and all substance.  It not only fails to build on what came before and/or expand its horizons but it cheapens and lessens the emotional impact of the prior films.  Despite a barrage of terrific character actors, not a single one of them makes an impression.  Renner makes an awful protagonist and he is left adrift by a screenplay that depends entirely on his alleged charisma.  As an action film, it fails by including almost no action whatsoever.  As a thriller it fails by refusing to include any real suspense or tension, save the above-noted set piece.  It has no real drama because it has no real arc.  Its so unsatisfying that one wishes that it were a pure reboot.  Better in this case just to start anew and leave the original films to live or die on their own merits.  The Bourne Legacy is more than just a bad film.  It's legacy is that it tarnishes what came before, either out of spite or pure incompetence.

ouch. i didn't mind it, but it did have its problems. i hope it doesn't ruin the entire franchise for people.

I was up for this film, but your comment about Austin Powers is so on the money (and I've never seen anyone else complain about it), your review must be true, and I'll steer clear.

I wish I didn't agree, but alas, I do. Maybe I liked Renner a bit more than you did, but I'm thinking that what I liked was the actual promise of a character who could have a sense of humor while fighting for his life. I'm glad that they did not try to recreate the stoic, but good, Damon character. I felt he was given nothing to do. I felt none of the characters were given anything to do, save Rachel Weisz, in the scene that you mentioned. And I believe that the two main shootouts were well executed.

That being said, I came out not believing that they messed up in such a big way, with what I consider to be three good to great Bourne movies as a foundation, to me the trailers sold a very simple story of 'there was more than one' that was already established in the first Bourne movies, so this long exposition in Legacy was absolutely unnecessary, and boring.

Another summer film that I looked forward to that disappoints.

As someone who sorely disliked The Bourne Identity in both book and film form (as well as purposefully neglected to see the second and third installments of the Bourne trilogy), I really enjoyed this reboot/continuation. The B-plot involving Jason Bourne was boring and convoluted to me, and I thought Renner's Aaron Cross was a much more interesting and sympathetic character than Damon's Jason Bourne.
I was actually OK with Weisz's Dr. Shearing, and thought the chemistry between Weisz and Renner was natural.
The ending was pretty disappointing, but I guess they set it up nicely for a sequel.