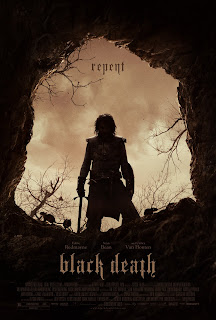 Christopher Smith's Black Death is a thoughtful and engaging film that isn't quite as traumatic as it wants to be. As an examination of faith in an era where there is no plausible hope, it portends to examine the dangers of fundamentalism in all cloths. That it doesn't quite reach the grand heights to which it attempts is only a token disappointment. It may not have anything groundbreaking to say, but it remains a creepy and occasionally disconcerting period piece. And it establishes Christopher Smith as a genuine talent coming off the prior triumphs of Severance and the genuinely terrific Triangle.

The story is set in 1348, as the first outbreak of Bubonic plague is ravaging England. A small band of knights lead by Ulric (Sean Bean) are tasked with venturing to a village where the inhabitants have seemingly avoided the pestilence that devastates the rest of the land. For reasons not entirely having to do with faith, young monk Osmund (Eddie Redmayne) volunteers to lead the knights into the mysterious town where, rumor has it, the plague-free villagers have been engaging in necromancy. What they discover I will leave mainly to you, other than to say that the village is led by a spirited blonde woman (Carice van Houten of Paul Herhoeven's dynamite Black Book) who indeed claims an immunity from the death that surrounds them.

Despite the horror trappings that a film about a plague lends itself to, the film does not intend to scare or even create much suspense. There is a token amount of blood and gore, but Smith is capable of restraint when offscreen violence is called for. Sean Bean again proves how reliably he is when tasked to play a morally gray character that nonetheless suggests inherent decency. The rest of the cast does its job without standing out, although I wish David Warner had more to do than a token cameo. The film is rich with period detail and feels absolutely accurate in regards to time and place. While it is not an action film, there are moments of genuine excitement, including a first act battle scene that, while gratuitous (it seems to exist only to have trailer-friendly imagery), is a solid example of low-budget action filmmaking.

The picture indeed asks worthwhile questions about the nature of absolutist faith and what happens when two ideological forces clash. On one hand, I could quibble that none of the thematic material is particularly original and that much of it was covered in entertainments as varied as Kingdom of Heaven and The Wicker Man (the original). But in this day and age, one can never have too many pictures dealing with the fallacy of moral or religious absolutism. Black Death doesn't break any new ground, but it tells its well-worn myth with a token amount of style.

Grade: B
Posted by Scott Mendelson at 4:17 PM