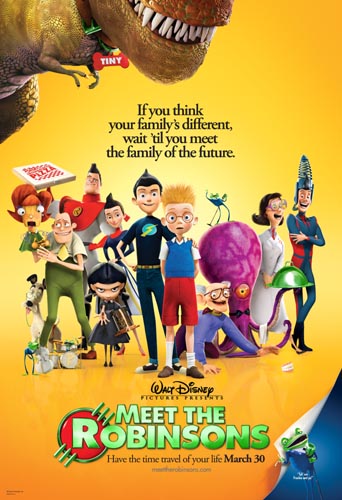 About halfway into Disney's Meet The Robinsons, I noticed my face was starting to hurt a little. I moved my jaw a little bit and nothing was specifically sore. After rubbing my cheeks for a second, I let it go and my face returned to that pained status almost instantly. I then realized that my face was in mild pain because I had been unconsciously grinning for at least the previous twenty minutes.  Meet The Robinsons is the best all-around cartoon since The Incredibles. It's actually funnier than The Emperor's New Groove and almost as moving as Toy Story 2. It's a broad declaration of war from Disney to all the other competing studios that have dipped their toes into the animation waters in the last few years. This is Disney at its prime.


Read more »
Posted by Scott Mendelson at 11:36 AM No comments: Links to this post