Review: Kathryn Bigelow's Zero Dark Thirty (2012) is a powerful tale of the costs of 'justifiable' violence. 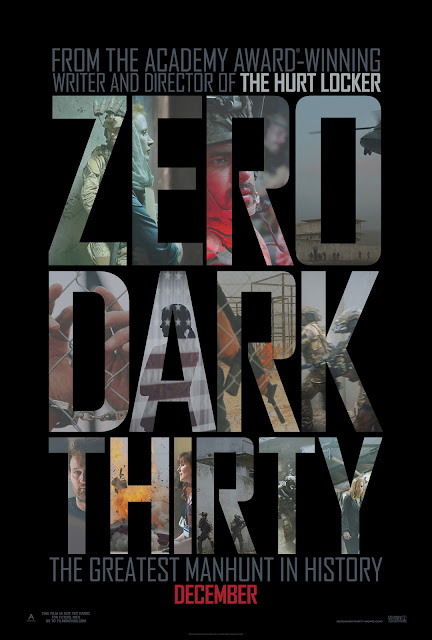 Kathryn Bigelow's Zero Dark Thirty (trailer) is a refreshing 'just the facts' procedural drama that maintains an almost allergic aversion to melodrama.  The film is ice-cold throughout, maintaining an even-keeled approach to the decade-long manhunt for Osama Bin Laden, pausing only occasionally to acknowledge the aftermath of violence.  At a glance, the film is basically the Jessica Chastain show, as she quickly becomes the center of the film and dominates the proceedings even when the focus shifts in the final thirty minutes.  Hers is a dynamite movie star performance, one that is not only Oscar-worthy but will likely win her the statute in a few months time.  The film surrounding her is an intense and often fascinating 'inside' look at both the 'dark side' and the mundane side of the would-be War on Terror.  It's a nasty bit of business, and its matter-of-fact presentation of unsavory details could be read as an implicit endorsement, just as its climactic brutality denies you the catharsis you might be expecting.  It merely exists to tell its story, not tell you how to feel about it.

The picture spans from 2003 until May 1st, 2011 as it follows Maya (Chastain) as she feverishly pursues a singular lead involving a possibly important Al-Qaeda messenger who she believes is close enough to Bin Laden to warrant absolute attention.  Through her we get a look at how the CIA went to work in the aftermath of 9/11 (the picture opens with an audio reminder of the attacks, arguably more for future generations than for us) and through her we see the years of weariness, false leads, dashed hopes, and seeming futility of it all.  We see plenty of 'enhanced interrogations', many of them conducted by Dan (Jason Clarke) who initiates Maya into the field right from the start. The film seems to view torture as a necessary evil, although eagle-eyed viewers will note that it doesn't elicit all that much of use.  Of note, the only time we see any major politician onscreen is when Barack Obama is shown on 60 Minutes stating that American does not torture to which Maya and Don and the others watching do all they can not to roll their eyes.

But again, it's clear that Bigelow and screenwriter Mark Boal are merely showing what these people felt, not proclaiming their own personal opinions on the subject.  The politics of the last ten years go unmentioned, with nary a reference to Iraq or the Bush Administration.  We do see several jolting acts of terrorist violence over the 8-year long story, and the film's only narrative fault is how often Maya seems to find herself in the thick of it (that may be true, but it feels like a narrative cheat).  There are sequences on genuine suspense and tension, even during the climactic raid where most of us know the outcome and general details.  The rest of the CIA crew are represented by the likes of Mark Strong, Kyle Chandler, Jennifer Ehle, and James Gandolfini.  All of these people are presented merely as dedicated professionals and none of them are lionized nor villainized.  This is a story of professionals doing their jobs, plain and simple.

That level-headed professionalism extends to the climactic raid.  The assault on Bin Laden's compound takes up the last portion of the film, and it's not quite what you may be expecting.  The raid unfolds in what seems like real time and it's a combination of high tension and grotesque reality.  The armed assault presented here is stark, detail-rich, and unflinchingly brutal.  We see gruesome violence, we see apparent innocents being shot, and we see horrified and surely traumatized children huddled in a dark room while US soldiers hold them at bay.  If you want to feel warm-and-fuzzy about the death of Osama Bin Laden, go watch the "5/1" episode of The Newsroom.  Bigelow and screenwriter Mark Boal detail all manner of violence, be it the various moments of torture, the periodic terrorist attacks, and the climactic bloodshed in a bluntly matter-of-fact fashion.

The film is unapologetically adult, refusing to coddle viewers with historical context or moral certainty (free hint: KSM = Khalid Sheikh Mohammed). I imagine the debates about which side of the political divide the picture sits on will be furious in the coming weeks and months, as it's story reveals how ideologically skewed reality often turns out to be (essay).  The overwhelming grimness extends to the finale and it reminds us that the picture was in the planning stages even before the unexpected 'happy ending'.  But unlike the Jimmy Fallon/Drew Barrymore romantic comedy Fever Pitch, another film altered by an unexpected real-life "feel good conclusion", the filmmakers don't allow unplanned reality to get in the way of the story they are trying to tell.  The mood from the outset is one of fatigue and weariness and even the finale dares to suggest how little was gained considering what was spent and what was lost for those who spent the last decade hunting down Bin Laden.

This actually falls right in line with Bigelow's Point Break.  That seemingly campy Keanu Reeves/Patrick Swayze action picture treated all violence as a moral tragedy and acknowledged that the world isn't made right again once the bad guy dies.  In Bigelow's world, be it the corrupt big city politics of Strange Days, Ron Silver's deranged killing spree in Blue Steel, the averted disaster of K19: The Widowmaker, or the guns-blazing sixth-season finale of Homicide: Life on the Street, the only truly good violence is the violence that was avoided and/or prevented.  Once blood is shed, Bigelow has long said, the happy ending is toast and we can only cope as best we can with the aftermath and the repercussions (which perhaps justifies a 'whatever it takes' strategy).  As such it is with Zero Dark Thirty.  The execution of Bin Laden is dirty business that was perhaps necessary, but the film takes no pleasure in it thus implicitly condemning those who rejoiced (and politicians who campaigned on it, natch).

Zero Dark Thirty is a fantastic achievement.  It's powered by Jessica Chastain's terrific performance and absolutely becomes the definitive take on its subject.  It's a cracking thriller, a mournful drama, and a thoughtful meditation on the costs of violence even in the most seemingly justifiable circumstances.  It is a grand and epic tragedy with nary a hint of melodrama or arbitrary 'human interest' subplots that nonetheless feels painfully human.  Of the many movies that have plowed past the 135 minute mark this season, this one felt the shortest.  It is a terrific piece of adult entertainment and one of the best films of 2012.