Review: Lawless (2012) is a generic and often dull macho crime drama that works only as right-wing propaganda. 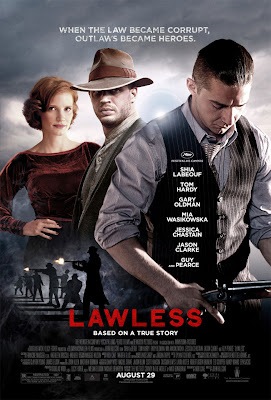 Twenty years ago, a film as formulaic and frankly contrived as John Hillcoat's Lawless would be considered nothing more than a pretty lousy B-movie that happened to have a few decent actors in the mix.  And today that is the best I can say about the film, even if its pedigree might have originally positioned it as some kind of Oscar bait.  The film can either be read as straight-ahead manly action drama or it can be viewed as a piece of political propaganda, positioning the noble 'regular Americans' against openly corrupt federal government forces who threaten their freedom to uh... bootleg.  I frankly hope the film is indeed intended to be read as such, as I'll take a bad film that's at least about 'something' over a pointless exercise in he-man violence.  At the very least, it stands as John Hillcoat's happiest film yet.  Unlike The Proposition or The Road, you won't exit theaters in a soul-crushing funk.  But unlike those two films, it's not a very good movie at all.  I suppose that's the trade-off, no?  Still, either way, Lawless is depressing all the same.


The film, apparently based on a true story and containing so little incident and action that I'm inclined to believe it, concerns the bootlegging Bondurant brothers.  Jack Bondurant (Shia LeBeouf) is the youngest brother, eager to prove that he has the necessary grit to man up and partake in the business alongside his bigger and tougher brothers.  Howard Bondurant (Jason Clarke) is the theoretical loose cannon of the trio, while proverbial head of the household Forrest Bondurant (Tom Hardy) is the much-feared leader who says little with words that cannot be said with fists.  All is well for this Prohibition-era family as they make liquor in the backwoods of Franklin County, Virginia and sell it to the big city.  The local authorities look the other way as the local bootleggers do their business with a minimum of violence.  But trouble rears its ugly head as Special Deputy Charlie Rakes (Guy Pearce) shows up demanding a cut of the profits.  Forrest Bondurant refuses and well, you can probably guess where the story goes from there.

Even as someone who thinks that Prohibition was a pretty stupid idea, one cannot help but note how these full-scale outlaws are lionized and treated as out-and-out heroes during the course of the narrative.  Charlie Rakes isn't just a big-city cop on the take, no he's a comic book super-villain who exists purely to intimidate our heroes, leer at their women, and represent the tyrannical reach of proverbial 'big government'.  Pearce is hilarious and by-far the highlight of the picture, but he is a living cartoon through-and-through.  Oliver Stone's Savages played in the same sandbox, presented relatively altruistic pot dealers who do little societal harm until the local kingpins attempt to take over their business.  But Stone's film, as dull and poorly paced as it was, was openly critical of the young pot distributors' naivety, and the picture openly states that their defiance caused far more trouble than it was worth.  But Hillcoat's film allows for no such ambiguity, as these young men who make illegal booze are lionized in a way that would never be accepted when dealing with, for example, inner-city drug dealers.  As someone who believes that the 'war on drugs' has caused the same kind of destruction that came about during Prohibition, that the legalization of drugs would mostly end the violence and societal devastation that comes with their value as a black market product, you certainly could draw parallels, yet even I can't fathom the idea that drug distributors were merely hard-scrabble Americans who only did violence when threatened by the tyrannical 'big government'.

But putting aside the film's politics and its arbitrary morality, the picture doesn't really work as a story per-se.  The prologue establishes the idea that young Jack doesn't have the 'stones' for the business and that's really the closest thing to a character arc that the film cares to offer.  The film is mostly an exercise in seeing fine actors struggle to add depth to paper-thin characters.  Coming off worst are the two token (very token) females in the picture.  I've long whined about how explicitly macho action films or crime dramas slit their own heels trying to shoe horn romantic subplots into the narrative for no other reason aside from having a pretty girl to put on the poster, and this is a prime example.  Mia Wasikowska, as a preacher's daughter, exists for no other reason than to be courted by Shia LeBeouf.  A sadder fate awaits Jessica Chastain, who is technically Hardy's love interest but exists explicitly to be leered at, threatened, and menaced by every single unsavory male character in the picture.  Try as she might, Chastain can't do much with a character who is given literally nothing to do other than be a prize or an imperiled damsel (I was openly shocked when she *wasn't* held hostage during the climax).  There is no law saying that you have to have well-written female characters, especially in a film with so few well-written male ones, but what could have been at least a lean and well-paced 95 minute thriller is a slog at 115 minutes due to all the time wasted on completely gratuitous and unengaging romantic subplots.

Despite the high-caliber cast, which includes a glorified cameo from Gary Oldman), only Guy Pearce gets to have any fun.  The rest of the cast basically sulks on cue and periodically gets their asses kicked by nefarious rogues.  The film doesn't so much contain action as it contains spurts of brutal and bloody violence.  There is nothing wrong with that of course, in fact I appreciated the hard R-rated nature of the picture.  But the film is yet another example of a movie seemingly intended for adults that is nonetheless pitched at the level of a mediocre childrens' entertainment.  There are no moral gray zones, no character complexities, and no real plot twists aside from how low the body count is.  The film has the depth not of a bad B-movie but of a mediocre serial.  Our heroes are tough and noble, the villains are hilariously hissable, and the girls sure be pretty (and helpless).  For a filmmaker who made his name crafting uncompromising adult moral dramas, Lawless feels like nothing less than a big-studio sell out.

Lawless has too few interesting characters and too little genuine excitement to justify its paper-thin plot and utter lack of narrative intrigue.  The film moves in fits-and-starts while we wait for Shia LeBeouf (who is indeed the lead character) to find the inner strength to metaphorically shoot the pig.  As a died-in-the-wool liberal, the film's conservative politics are arguably the best thing about it, as its the closest thing to substance, however, wrongheaded I might think it is, that the picture has to offer.  Lawless is a bland journey about stupid and/or irrationally violent men being held up as heroes because they happen to be played by movie stars.  The film isn't fun enough, isn't exciting enough, isn't smart enough, and isn't entertaining enough to justify its connect-the-dots plotting.  Lawless is merely a bad movie, but as a matter of wasted potential, it's downright criminal.