Review: The Master (2012) is an intimate, if aloof, American epic told on a sprawling 70mm canvas. 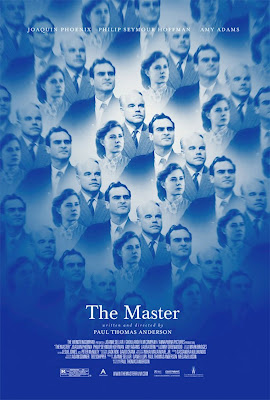 Paul Thomas Anderson's The Master is such an aggressively ambiguous picture that it is almost a risk to attempt to assign explicit meaning to it.  It is a sprawling and majestic character study, visually dynamic (see it in 70mm if at all possible) and superbly acted throughout.  But it is arguably more of a technical exercise than an emotional journey, as the film keeps us at somewhat of a distance even as the characters occasionally pour their hearts out onscreen.  But as for the film's deeper meaning, I imagine each and every single viewer will have differing opinions on that, and yes I admit my thoughts on the film may in fact be less worthwhile by virtue of only taking in a single theatrical viewing.  But as Roger Ebert occasionally said, it's not 'what it's about' but 'how it's about it'.  Whatever it is The Master is about, and I do have my theories, it tells its story in a rather splendid fashion.

There is not much story to divulge, only that the film concerns Freddie Quell (a searing Joaquin Phoenix), a broken man seemingly suffering from post-traumatic stress syndrome as a result of his just-completed service in the recently-completed second world war.  With no real talents aside from the inexplicable ability to make homegrown alcohol out of pretty much anything, Freddie stumbles along until he finds his way in the path of Lancaster Dodd (Philip Seymour Hoffman).  Dr. Dodd is many things, among them a writer, philosopher, and scientist.  But for the purposes of this story, he is on the cusp of developing a newfangled religion based on the idea that well, yeah, it's basically Scientology.  Yes Lancaster Dodd is basically L. Ron Hubbard and yes the film is loosely based on the origins of that particular organization.  But putting aside any 'controversy' regarding the subject, the film is less a definitive history lesson or a judgment on the organization than a striking character piece that uses a token amount of real life as a springboard for a specific and personal tale.

First and foremost, as a piece of cinema, the film looks absolutely gorgeous throughout.  I was lucky enough to see this in 70mm, and you can feel the 'bigness' in every frame.  For the sake of the format, I wish there were more exterior shots (There Will Be Blood would be even better suited to the format), but what we get is occasionally breathtaking.  Jonny Greenwood's haunting score toes the line between flights of fancy and sheer offbeat intensity, while cinematographer Mihai Malaimare Jr. is going to get an ungodly amount of work off of this picture.  The performances are all aces, with special kudos to Amy Adams for turning what could have been a one-note 'token wife' character into something much deeper and arguably darker (she's sadly the only female character who matters, for what it's worth).  The picture doesn't shy away from dealing with the specifics of the Scientology, in both an exploratory and critical sense, and it's frankly easy to see the appeal of their psychological exercises for those who are as screwed up as Freddie.  I don't know how much of the film was taking from real-life and frankly do not care, as it works as an approximate historical fiction regardless.  The proverbial acting duels between Hoffman and Phoenix are as exciting and suspenseful as any action sequence and the film excels whenever they are together.  Again, the film is a bit cold and withdrawn, but that is arguably why Anderson's epic is merely very good instead of great.

As for what it all means, I'd argue that it's a pinpoint examination of a variation on the classic western.  Most westerns deal with the struggle between untamed freedom and somewhat constrained civilization.  In this case, Anderson is (arguably) constructing a meditation on a key contradiction in modern American society, contrasting our alleged desire for individuality and/or individual freedom with our innate desire to be led by someone we presume wiser than ourselves.  We say we want to be our own masters and shape our own destinies yet cling to authority figures who offer us the comfort of not having to make our own decisions and take our own risks.  It is how leaders, both great ones and terrible ones, often come to power, by appealing to our innate desire to be led.  But whether I 'got it' or merely took a stab in the dark based on certain key dialogue passages, that will be up for your to discover.  As a surface level entertainment, it is an unqualified success, a true cinematic epic that tells a small-scale story on a massive canvas.  I'm sure we critics will debate its under-the-surface pleasures and pontifications for years to come, and it is to the film's credit that it mostly enthralls while remaining somewhat aloof.  I somewhat wish that Anderson would return to the unabashed emotion of Magnolia (still my favorite of his films by a long shot), but the work on display here is unquestionably that of a um... master entertainer and artist.  Paul Thomas Anderson remains one of our most interesting and challenging filmmakers of the last twenty years and The Master is yet another feather in his cap.

I didn't see this " true epic" in 70mm... do you, Mr. Mendelson mean to tell me that this little piece of "feather" on someone's cap is even more awesome in 70mm? Specifically, are the untamed bushes from various women, Philip Seymore Hoffman's nose hairs and nude scenes from people who should never, ever, ever be naked even more artsy and breathtakingly gorgeous in that format? Because I just don't believe you - it just isn't possible!

Lancaster "Todd"??? Really? I've never seen a movie in which reviewers have stumbled so badly in their attempts to get the facts right. All across the board.


The character's name is "Dodd".

SwagBucks is a very recommended work from home website.