Why I almost cancelled my Indiana Jones blu-ray order... 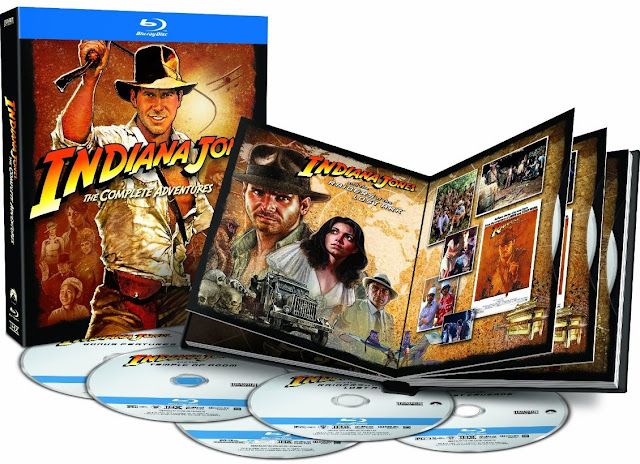 As with most of the geeks here and elsewhere, Amazon will be dropping off my pre-ordered set of the Indiana Jones series on Blu Ray this afternoon.  I ordered it a few months ago, despite misgivings about it.  Misgivings, you say?  Well, here's the rub: My wife and I just watched all four films just last year.  So, and I hinted at this in last week's essay about multiple theatrical viewings, the life of an adult (job, family, etc.) leaves little time for watching movies, even favorite movies, multiple times.  My wife and I just watched Raiders of the Lost Ark, Indiana Jones and the Temple of Doom, Indiana Jones and the Last Crusade, and Indiana Jones and the Kingdom of the Crystal Skull.  What is the likelihood we are going to watch them again anytime in the next few years?  I almost didn't buy the Jaws blu ray for just this reason, as my wife isn't a Jaws fanatic and I can't imagine showing the film to my kids anytime terribly soon (my wife being my wife, she actually prefers Jaws 3 and Jaws the Revenge).  But in the end I eventually spent the $20 on Jaws and the $65 on the Indiana Jones set because I figured my wife would enjoy watch the copious new extras on the sets.  Well, I was half-right.

While the Jaws set comes with two feature-length documentaries, one of which is completely new, the Indiana Jones set includes just two hours of new supplements, one hour of which is an old EPK, while actually losing quite a bit in the bargain.  You know all those bonus features on the Indiana Jones and the Kingdom of the Crystal Skull DVD and Blu Ray set that came out back in 2008?  Well, according to early reviews, save for a truncated 29-minute featurette tacked onto the end of the old documentary that came on the original 2003 DVD release, that's all pretty much gone.  So not only do we not get all that much new stuff, we actually have to hold onto that second disc from our Indiana Jones and the Kingdom of the Crystal Skull set we already purchased.  I actually bought that one on DVD for cheap since I merely wanted the set in a compact box and figured it would all be included on the eventual Blu Ray series box.  How foolish of me. Yes when the Star Wars Saga Blu Ray set came out last year, we lost all three 'disc 2's from the prequel discs.  But we gained about 17 hours of completely new material, including two hours of deleted scenes and countless new and old documentaries.  The removal of this earlier Indy material, which also includes a few minor items dropped from the early trilogy DVD sets (storyboard comparisons, still galleries, a short featurette on the trilogy, and the introductions with Spielberg and Lucas) actually renders this set a net-loss when it comes to supplemental material.

I have a tough time believing there aren't any deleted scenes from all four films.  And while Spielberg has been gun-shy about commentaries, I have a tough time believing that Paramount couldn't either get George Lucas onboard or arrange for some kind of cast/crew commentary made up of either new sit-downs or archival material.  But barring that, because life does sometimes get in the way (if Lucas and Spielberg really aren't on the best terms at the moment, then perhaps that interfered with any new material), there is absolutely no excuse for excluding any of the previous material from the previous releases.  I have complained on Twitter about the rather obscene Harry Potter box set, in that it costs a bloody fortune partially because of the ridiculous packaging (which is apparently causing disc damage) and the various pieces of useless swag.  Despite already owning the series on Blu Ray in the compact box set that was released last year, I would have gladly picked the new set up if it cost, say $200 and merely included the discs in a compact keep case-type packaging.  Because here's what Warner Bros. did right: They included every single bit of material that has ever been included on any DVD or Blu Ray Harry Potter release ever.  If I were to buy it, I wouldn't have to hold onto anything else I've bought in the past.

I'm sure the Indiana Jones films look and sound great, and I'm frankly grateful that the packaging resembles the snazzy compact box that housed the Star Wars Blu Ray set.  But now that I have the set, how soon will I actually get around to watching them again?  Maybe when Allison is a few years older, sure (if she can sit through and enjoy ParaNorman...), but who knows what new video format we'll have by then?  Ironically, I immediately pre-ordered another catalogue title that will also arrive today, the spiffy new Halloween II and Halloween III: Season of the Witch Blu Rays.  Those I can guarantee that we will watch at least once every couple years, and I imagine she will go gaga over the new documentaries.  We're both fans of the Halloween franchise and we usually end up watching at least a couple of them this time of year.  I bought the Titanic Blu Ray as my wife and I haven't watched the whole movie in ages and we'll both enjoy the historically-slanted supplemental material (it's no secret she's a disaster porn junkie)  As I've gotten older I've had to take stock in which catalogue releases I truly want to splurge on.  It's not a matter of just money, but a matter of 'What's the likelihood I'm going to watch these again in the very near future?'.  As such, I still have my Alien Quadrilogy DVD set and I still have my Back to the Future trilogy DVD set, with no plans to upgrade for the immediate future.  I relented on the Indiana Jones set because I do love the movies and I figured the new supplemental features would be worth the purchase.  Now that I know how little there is, I must confess that I almost changed my mind.

If the enhanced video and audio quality isn't enough to bait you (it is for me), then I don't blame you.

I haven't been to upset with blu-rays not porting over bonus material or adding new documentaries. First and foremost, with blu ray, my concern is the transfer of the film and how amazing it can look. There are few films anymore that i will dwell into the supplemental materials anymore. 1) Might not be that interested 2) I've already heard pretty much everything everyone has to say through the dvd materials over the years. And having worked in QC a lot of it just turns into an assault of butt kissing compliment sessions.

A recent example, there were complaints on the lack of new docs on the Halloween 4 & 5 blu rays. How many times do we really need Danielle Harris and Ellie Cornell telling us the same stories over and over again?