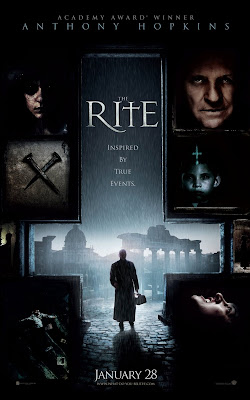 Mikael Håfström's The Rite is a case where the true story that the film is seemingly based on seems far more interesting than the movie that got made.  The opening act of the picture seems to be setting up a story set in a relatively new Vatican program to teach modern-day priests how to perform exorcisms.  Sounds neat, right?  But the film quickly discards that idea to focus on a couple token case studies that, while interesting, too often feel like toned-down variations of any number of exorcism genre entries.  To its credit, the film is far more of a drama than an outright horror picture.  The third-act dovetail into the overtly 'scary' feels more like a test screening demand than an organic filmmaking choice.  But the film is creditably performed, looks polished throughout, and contains worthwhile insights about maintaining faith in an era of intellectual doubt.

A token amount of plot: For Michael Kovak (a low key and effective Colin O'Donoghue), a scholarship to seminary school seems to be the only likely escape from taking over his father's mortuary.  But on the eve of graduation, a tragic accident exposes just how little he believes in his own faith.  However, his supervisor Father Matthew (Toby Jones) politely but bluntly explains that a failure to take the oath will turn his scholarship into a student loan. But seeing a genuine crisis in faith, Father Matthew sends Michael to the Vatican to take a newly formed course on exorcisms.  He is quickly introduced an older, somewhat venerated exorcist (Anthony Hopkins) who exposes him to things that may affirm his faith or threaten his life.

For the record, this is not a horror film in any conventional sense.  In his first scene, Hopkins's Father Lucas Trevant states that if we're expecting pea soup and spinning heads than we'll be quite disappointed.  And most of the film is patently low-key, with an emphasis on Kovak's personal issues over violence, gore, and shocks.  Rutger Hauer gets all-too little screentime as Kovak's father, but his very presence creates an impact (with the last half-decade of overt stunt casting, it's nice to see Hauer get a chance to actually act).  Alice Braga plays a journalist investigating the new class, and she is basically a stand-in for the author (Matt Baglio) of the original book that the film was 'suggested' by.  But the majority of the film is an acting duel of sorts between O'Donoghue and Hopkins, and they suit each other well.  Hopkins plays it closer to the vest than you'd expect for this kind of material, and O'Donoghue is more than up to the challenge.

Alas, the film eventually falls into the trap of so many religious thrillers: they set up a challenge of faith and solve it by providing something awfully close to genuine proof.  Without going into details, Kovak doesn't come to terms with his faith or lack-thereof so much as he's confronted by audio-visual evidence.  And, as I mentioned above, as this morose character drama was playing out, I desperately wanted to get back into the classroom and see just how the Catholic Church went about teaching the craft of exorcism to an age where many of the would-be symptoms have been explained by medical science.

Still, The Rite remains a moody and intelligent drama, with strong performances and a genuine sense of mood and place. The first two acts are engaging and thoughtful, and the somewhat more visceral third act doesn't fatally wound the film.  It loses points for cheating at the end and loses more by ignoring a theoretically more interesting subject that exist merely on the fringes.  Anyone expecting a full-blown scary movie will be quite disappointed, but The Rite earns points for being a character drama and an occasionally compelling one.

Grade: C
Posted by Scott Mendelson at 9:58 AM