Review: Warm Bodies (2013) is a poignant and allegorical genre hybrid that adds rich layers to the zombie template. 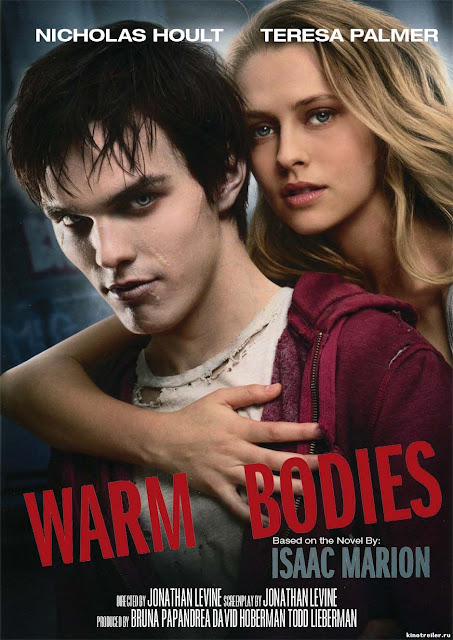 There is very little that happens plot-wise in Jonathan Levine's Warm Bodies (trailer) that you haven't seen somewhere else. But beneath the somewhat generic narrative is both a rather sad subtext and a worthwhile parable that elevates the film beyond its somewhat simplistic humor. Most importantly, the film genuinely adds a new idea to the zombie cannon, something that seems so simple that I'm surprised that someone didn't do it much earlier.  In short, the film is told from the point of view of a zombie.  Set in a world where something somewhere caused the vast majority of the world to turn into zombies, the film tells a seemingly simple story of how one such brain-eating creature falls in love with a random human he happens to encounter.  The romance is arguably the film's weakest element, as it's basically a variation on Beauty and the Beast's Stockholm syndrome, but the story goes in some thoughtful directions nonetheless.  Based on a novel by Isaac Marion, Warm Bodies takes bits and pieces from Beauty and the Beast, Wall-E, and How to Train Your Dragon to shape a film that becomes a parable for our current 'war on terror' foreign policy.  But its most important idea is detailing the sheer hell of actually being a zombie.

The plot concerns a world overrun by zombies, where the walking dead roam the Earth while the few human survivors cower in walled-up fortresses.  The core relationship is that of zombie "R" (Nicholas Hoult) and a human survivor who he inexplicably decides to rescue from a zombie attack.  Maybe he's drawn to her because he has eaten the brains of a friend of hers and thus has a indirect mutual connection (there is a clever notion that eating the brains of a human gives the zombie that person's memories and thoughts).  Maybe he's just into her because she looks like Teresa Palmer, but whatever the case may be, the first act quickly turns into a variation on Beauty and the Beast.  The film walks a fine line between romanticizing what is technically a gentle captor/not-entirely unwilling captive relationship and not turning Palmer into a helpless damsel-in-distress.  The picture does take pains to highlight the survival at all-costs mentality of those behind the wall.  So it's easy to see why she might be appreciative of a zombie who not only doesn't eat her and protects her from other flesh-eating 'monsters', but also allows her to have a little fun for what surely is the first time in awhile.

The film uses music as a symbol for the last remnants of our humanity while arguing that our reliance on newfangled technology turned us into zombies in a metaphorical sense well before the plague took hold.  The picture doesn't soft-pedal the bloodthirsty nature of its zombie protagonist, as he is clearly shown eating other people during the film's opening segments.  But the picture really comes to life during it's second half, as  "R" starts seemingly 'coming back to life', an affliction that eventually affects those zombies he comes in contact with. It's a powerful, if simplistic, parable, the idea that those who seek to harm us might stop doing so if we stopped trying to harm them in turn.  It's an easy metaphor for our current post-9/11 foreign policy, but it's ultimately a humanistic message.  Like How to Train Your Dragon, the film cheats by (spoiler of a well-telegraphed later development) creating a secondary class of antagonists so that the zombies and humans have something to fight against in the action climax.  In this case, it's the 'Bonys', zombies so-far gone that they've chewed off their own skin and muscle.

But the most compelling concept in Warm Bodies is how the zombies themselves relate to each other.  Through the voice over narration supplied by "R", we learn that zombies are theoretically fully aware human beings who merely have no psychical ability to do anything other than slowly walk around, grunt at each other, and eat the flesh of the 'living'.  Any number of zombie films have cast the affected as a metaphor for illness, but this is the first zombie film I've seen that casts the condition as a kind of walking comatose condition highlighted in Dr. Oliver Sacks's Awakenings (which was of course made into a film in 1990).  Although the film doesn't state whether every zombie has their full mental capabilities, it's a horrifying and interesting idea.  The picture earns its most profound emotional beats as the various zombies slowly rediscover bits and pieces of their humanity, including a touching moment where Rob Corddry's "M" has a momentary flashback to his former life.  Whatever horror can be found in the idea of a world populated by walking dead, I'd argue Marion's concept of a world of literal waking dead is both horrible and heartbreaking.

Warm Bodies is a genre hybrid that mostly works through sheer good will.  The plot beats are formulaic and there are few real surprises, but it entertains and is more thoughtful than you might expect.  The characters, human and zombie alike, are relatively well-developed and the film refuses to paint the humans as antagonists even when the story might call for it (John Malkovich as Palmer's trigger-happy father is given moments of emphatic humanity as well).  The romance is the selling point, but the real key to the film's power is the idea of being fully aware yet frozen in a decomposing body.  It brings about the same melancholia associated with some of the better 'end of the world' pictures and paints as tragic a portrait as Zombieland, yet it is far more optimistic.  If we can call the zombie film a 'genre', then Warm Bodies deserves a spot as a genuinely different and thoughtful variation.  It is an amusing romantic comedy, a worthwhile political parable, and a frankly disturbing metaphor based on the idea that zombie-ism is truly a disease in the worst sense of the word.

Grade: B
Posted by Scott Mendelson at 1:27 PM

Great review, and I think I liked the film even more than you did. Poignant is the perfect word, but it's also an incredibly charming pop confection. Just delightful.