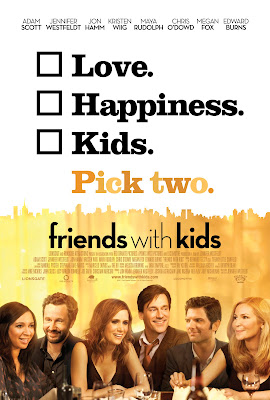 There are few things more dispiriting than an engaging and thoughtful film slowly ditching that which made it unique and instead traveling down the road of convention.  Yet such is the case for writer/director Jennifer Westfeldt's Friends With Kids.  What starts as a strong and painfully honest look at how adult relationships are affected when said adults start having children gives way to a somewhat conventional romantic comedy set-up where two leads spend the movie looking for love everywhere but with each other.  That the film still maintains its entertainment value is due to is strong cast and slice-of-life details.  But while the film is mostly engaging and occasionally thoughtful, it loses points for ditching the very components that made it stand out among the pack in order to trade on genre conventions.

The film, in brief, concerns three couples, two of whom are married and with kids (Kristen Wiig and Jon Hamm, Maya Rudolph and Chris O'Dowd), and a third (Westfield and Adam Scott) who are basically platonic friends still in search of romantic bliss.  Seeing the damage that having children has done to their friends' respective marriages, they decide to have a child with each other so they can 'get it out of the way' while still looking for their theoretical soul mates.  The parenting stuff goes off relatively without a hitch, but their love lives become a bit complicated when they each meet someone (Edward Burns and Megan Fox respectively) who may in fact be 'the one'.

Considering how much the opening act of the film stresses the impact of having children on social relationships among adults, it's dispiriting to see the kids, both those already introduced and whose conception kick-starts the plot, pretty much disappear after the first act.  Like any number of sitcoms who added a kid late in the game (think Ross and Rachel's daughter on Friends), Westfield and Scott's newborn only shows up when the plot requires it.  For the entire second half of the film, the focus is not on the struggles of raising a child with someone who isn't technically a spouse or a lover, but merely about how Julie and Jason come to grips when they each start seriously dating again.  By focusing not on family drama but on romantic melodrama, the film becomes a more high-toned and adult-oriented variation on the Katherine Heigl/Josh Duhamel comedy Life As We Know It.

This isn't to say that the film is without merit, or that its script doesn't contain nuggets of insight or intelligence.  Jon Hamm has two flat-out terrific moments as a husband/father who hasn't adjusted as well as he'd like to, Westfield writes herself a wonderfully heartbreaking third-act scene, and Megan Fox gets the rare chance to be funny during her initial appearance (where she rebuffs Westfield's atrocious pick-up attempt).  But the film seems oddly determined to undermine its own social worth (as an honest look at balancing family and friends) in order to merely go down the road very-often traveled.  Will Julie and Jason realize that they in fact are meant to be together?  Will this seemingly unconventional family become an inherently conventional one by the time the credits roll?  That the film spends so much time exploring this route, at the cost of its robust but mostly-wasted supporting cast, is the film's biggest sin.

Friends With Kids is not really about what its title and its opening reels imply.  It is, despite its fine cast and sharp dialogue, an often border-line sitcom-ish (Oh no... exploding poop!) romantic comedy that sacrifices that which makes it stand out in a kid-friendly genre marketplace in order to tell a generic tale.  I wish the film wasn't a more high-toned variation on Life As We Know It.  Heck, I wish the film wasn't a less dramatically courageous variation on the criminally underrated Rupert Everett/Madonna vehicle The Next Best Thing.  I wish that the film got better use out of Megan Fox, without sidelining her during the final acts and coming perilously close to making her a 'villain' due to her not wanting kids.  While it mostly presents its narrative with a token amount of emotional engagement and intelligence, one cannot help but wish that the film didn't abandon its initial promise in pursuit of more modest goals.

dang, i was hoping this was good, and clever.