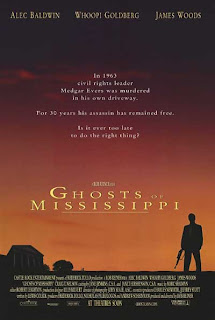 I once said about Oliver Stone’s JFK, that if every single minute of the movie was fiction, it would still be a terrific piece of entertainment. Say what you will about historical accuracy, Stone’s film was exciting, fascinating, expertly acted, masterfully edited, and full of Stone’s trademark passion for his subject.

Ghosts of Mississippi tells the story of how Bob DeLaughter (Alec Baldwin) brought Byron De La Beckwith to justice for killing civil rights leader, Medger Evers, nearly thirty years after two hung juries set him free in 1963 Mississippi for the original crime. This is a story that should have made a great motion picture. The problem is that it TELLS the story instead of showing it. We’re TOLD that we should want to see justice done. But, the storytelling is so lacking in energy that by the end, we couldn’t care less. Yes, the killing of Medger Evers is a terrible crime, but you knew that going in. The movie builds almost nothing on the emotion that you'll already enter the movie with.

Of course, I know I’m trapping myself in a corner. I disliked A Time to Kill, which told a similar story, but with almost too much passion, which made the film feel like a melodrama. Of course, any film which includes a ‘crowd-pleaser’ involving a man (a KKK member, but still a man) being set on fire by a teenager is bound to annoy me. It was also an astoundingly one-sided tale in favor of vigilante homicide. This picture, while not as entertaining, has its morals in the right place, and is thus a slightly better film. Ghosts of Mississippi tells a passionate story but forgets to include the passion. It lays out the facts and tells its tale, but there is never any spark in the proceedings. Few of the characters come off as human beings, simply symbols for righteousness and evil.

First we have “mighty whitie,” played by Alec Baldwin, an occasionally terrific actor who’s been in a slump recently. Here he plays the righteous attorney who strives and crusades for the poor, mistreated Evers family. While Baldwin does a serviceable job, every attempt to show him as a loving husband and father comes off as phony and laughable. Next we have the mourning widow played by Whoopi Goldberg, who’s been in a slump since Sister Act, back in 1992. This is the woman from whose eyes the story should have been told from. But, by telling the tale from the white lawyer’s point of view, they have regulated the main characters to bit players. All Goldberg does for about 70% of the film is talk on the phone with lots of “uhs, huhs, yep’s, thank you Mr. De Laughters.” Aside from a fine climactic speach about the impracticality of hate, she is given little to do.

Of course, as expected, the film’s lone energetic performance comes from James Woods, who is known for giving the only life to otherwise dull films (see The Specialist, or better yet, don’t), and making good films better merely by his presence (Hercules, Nixon, Contact). As Byron De La Beckwith, he plays the assassin as a fiendish, sniveling, slime ball. He is played as a man who is delighted by his own racism and relishes the chance to shock people with his opinions. Of course, we are supposed to despise him, but the rest of the main characters are so lifeless that we are almost grateful for the fact that, while he is on screen, we will not be bored. If you had the choice between watching glue dry and watching a train wreck, which would you choose to view? The other actors, from ace character actor William H. Macy (Fargo, Air Force One, Boogie Nights) to Craig T. Nelson (Coach), do what they can, desperately trying to inject life where there is little. Macy is the only one who succeeds, but do yourself a favor, and rent Fargo instead.

The best thing I can say about Ghosts of Mississippi is that it tells its tale, and, as far as I know, sticks to the facts. In other words, it might make a good history lesson, but there are several good documentaries about the case that accomplish that. In the end, we have a dull tale about “white redemption,” on which a noble white knight saves the oppressed black man, in return for the sins of the past.

This is becoming a trend of recent years, as if studios think that audiences won’t see a civil rights drama without a white man to “relate” to. This may be true, as A Time to Kill was a big hit ($104 million) while great films about black people, told by black people like Rosewood ($10 million) and Once Upon a Time: When We Were Colored ($2 million) have flopped. The next true test comes with Steven Spielberg’s Amistad, opening December 12th, which tells the true tale of a slave ship revolt. Morgan Freeman (perhaps the best actor working today) gets top billing, but Anthony Hopkins is the real star. If anyone can reel them in for such a story, Spielberg can, and he may win a few more Oscars in the bargain.