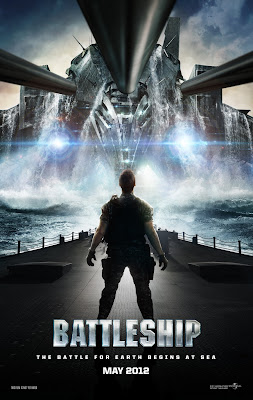 Maybe it's all led up to this.  Ten years of big-budget spectacle film-making that seemed ever-more geared toward the theoretical fourteen-year old boy who doesn't necessarily know how to read his native language have brought us Peter Berg's Battleship. This is the very definition of empty spectacle, devoid of a single interesting character and (with one token exception) any interesting plot turns.  It is not so much a film as a prepackaged product, so intent on appealing to as many people as possible that it is completely devoid of any real appeal.  Battleship is the kind of movie that makes it so hard to defend the industry, and so hard to actually praise mainstream films when they do get it right.  If you're the kind of person who presumes that all movies stink and that the films being made today are by-nature inferior than the ones that were made in some by-gone era, Battleship is exactly the kind of alleged popcorn entertainment that you're probably thinking of.  If we often discuss big-budget franchise pictures in terms of food (The Dark Knight is a filet minion, Transformers 2 is a Big Mac, etc), then Battleship is basically a jar of baby food.  There is technically food inside the jar, but it is stripped of all sugar, all salt, and all taste beyond whatever natural flavors the jar might possess.

The plot, in brief, concerns a group of vaguely-robotic aliens that decide to invade the Earth for apparent exploratory purposes.  The only hope for humanity is in the form of a handful of naval ships who have ventured into the aliens' path during a training exercise.  So of course now it's the US Navy versus the outer-space invaders.  Back in 2008, a friend of mine referred to Wanted as a film that ripped off so many other movies that it should have come with a works-cited page.  Not only does Battleship steal its plot, its characters, its action, and most of its moneys hots from other blockbusters from recent years (Star Trek, Armageddon, Top Gun, Pearl Harbor, Transformers, Titanic, Green Lantern, The Guardian, etc), it so disparages said material that the original films ought to sue for defamation.  That the film is based on a board game is no excuse.  Pirates of the Caribbean: Curse of the Black Pearl used a Disney theme park ride as a springboard to craft a wholly original adventure with engaging characters and crafty plot turns.  Hell, Universal crafted a fun and witty little mystery out of Clue nearly thirty years ago, a film that still holds up thanks to crafty plotting and fun actors chewing the scenery.  Battleship has absolutely no excuse for being as lifeless as it is.


Battleship crafts the hoariest set-up imaginable (reluctant screw-up must save the day and earn the respect of his would-be fiancee's father in the process) and fails to give us a single interesting character.  Taylor Kitsch plays 'stock male lead' with all of the aplomb said description implies (he's still supposed to be sympathetic when his recklessness basically kick-starts the aliens' aggressive attacks).  Pop superstar Rihanna delivers all that is required from a role that requires absolutely nothing except her theoretical drawing power.   Tadanobu Asano has a few moments of grace and humor, and frankly it's refressing to see an Asian actor basically morph into a co-lead in a movie like this (yes, I know why too, but it's still nice). Brooklyn Decker plays the hot girl and while I suppose she's *hot* (not my type, but I digress), the insertion of a token love interest saddles the film with a needless subplot involving an injured veteran rediscovering his inner-courage (Gregory D. Gadson, whose real-life story is more interesting than this film).  Keeping the focus on the matter at hand could have at least made the film into a relatively well-paced piece of garbage (as it is, the 130 minute film takes nearly 50 minutes to get to the point).  But most wasted, and whose waste is most indicative of the film's lack of anything resembling charm, is Liam Neeson.  He's in the film for maybe five minutes and has literary nothing interesting to do. And to answer everyones' burning questions about Neeson: No and No.

The actions scenes are indeed on a grand scale, and there are indeed moments of massive destruction and bloodless carnage.  The robotic aliens seem to avoid targeting humans (perhaps they understand the MPAA ratings protocols?), but their obliteration of bridges and buildings bring about plenty of death and implied despair (at one point the painfully underused Peter MacNicol exclaims that 25,000 are dead, but its not known if that's a worldwide figure or just in America). If this were a more subversive film, I'd argue that the aliens are actually parables for America's 'whoops, sorry we blew up your village while bringing you freedom' foreign policy.  But that doesn't jibe with Berg's prior filmography (The Rundown, The Kingdom, and Hancock basically defended 'break a few eggs to make omelets' foreign policy) so I don't want to speculate too much. As impressive as the special effects are, it's basically mostly just shots of faceless battleships blasting away at faceless alien forces. It's metal vs metal, with the end result being boredom.  There is an somewhat clever scene at the start of the third act where the film tries to approximate a game of Battleship and there is a climactic turn that almost brought a smile to my face, but the atrocious 'character set-up' of the first act generally gives way to boring and monotonous action beats during the second act which have no pull because we don't care about any of the characters involved.

The worrying cynicism on display in Peter Berg's Battleship (this from someone who considers The Rundown, Friday Night Lights, and Hancock among the best films of their respective years) lies in its almost intentional absence of anything resembling quirk or individuality.  It has no engaging heroes or engrossing villains, no creativity at any level beyond the special effects process. But even its aliens feel cribbed from Transformers.  Say what you will about the Transformers franchise, but it had an engaging score, action beats that felt fresh/different, the admitted thrill of seeing childhood cartoon characters duking it out on the big screen in live-action, and a strongly political pro-occupation point-of-view; no matter that I might disagree with it.  Battleship arguably has not a single idea, nothing that might offend or challenge or intrigue audiences on a global scale.  While Battleship is technically 'harmless', the theory behind its creation is almost dangerous and I fear what its success might bring.

The picture contains no personality, no spark, no trace of individuality that might make it even resemble something other than a pure product. Here is a film seemingly created in a scientific laboratory with arbitrary components of past blockbusters sewn together as if blockbuster film-making was merely a question of checking off boxes on a recipe.  But into this stew goes no spice, no extra ingredients, nothing that might actually engage the taste-buds; arguably for fear that it might prove to be too salty or sour for even a single paying moviegoer.  It is the closest thing we've come thus far to Explosions: The Movie.  The only reason it escapes a failing grade is because it is not evil, merely frighteningly cynical. But purely in terms of what you see onscreen, Battleship is as bland as un-buttered toast and about as appetizing as eating a ball of plain iceberg lettuce.

Grade: D
Posted by Scott Mendelson at 6:00 AM

Uh, Pirates plot and characters were riped off of The Secret of Monkey Island.

Lol, props to you Scott as soon as I saw the title of the review I just started laughing. I wonder have you ever given an 'F' or do you stop at 'D' because you hated Crazy, Stupid, Love with quite a passion but only gave it a 'D'.

If you love going to the movies, please do not see this film. Do not give Universal a dime or they will continue to make these obscene, awful films. If you are a movie masochist and must see this pile, pay for another movie and switch theaters. It's time to send the studios a message.

omg i love this. this looks just as bad as you say.

Scott: Have you ever gave a F-grade to a movie?

I have certainly come close, but generally if I can find even a single interesting character, clever scene, or noteworthy element I don't give a full-blown F. In this case, I somewhat enjoyed the 'let's play Battleship' scene, as well as the climactic story turn that at least was somewhat original/clever. To my recollection, I've only written two F reviews. They are...