Sony apparently plans to reveal all 120-minutes of The Amazing Spider-Man via clips and previews before July 3rd. 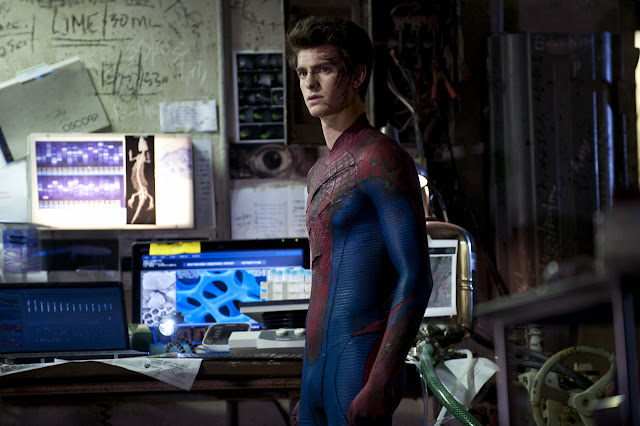 The press release is after the jump, but the short version is that Sony is taking a page from Warner Bros. and showing off six more minutes of The Amazing Spider-Man in select theaters before Men In Black 3, which opens this Friday (had life not gotten in the way, I would be currently writing a review of just that film).  I don't know if this is a six minute scene (ala the Dark Knight/Dark Knight Rises IMAX prologues) or yet another extended preview.  With The Avengers basically taking the wind out of the sails of every other major blockbuster and The Dark Knight Rises looking to dominate the second half of summer 2012 while Prometheus takes up the adult-skewing geek-nirvana slot, Sony is in a jam with their Spider-Man reboot. Fair or not (I'd argue fair), The Amazing Spider-Man is contributing exactly zero to the hype and/or cultural conversation.  Toss in rumblings of dissatisfaction which seems to coincide with two new writers (Transformers/Star Trek scribes Alex Kurtzman and Roberto Orci) being hired to pen the theoretical sequel and you can literally see the sweat on Sony's brow.  I will say that the action sequences look quite impressive, and that may be enough to justify an IMAX 3D viewing when the time comes.  But for now, those seeing Men In Black 3 in 'IMAX 3D and select theaters' will be treated to six more minutes of "The Completely New and Totally Different Peter Parker Becomes Spider-Man Origin Story".  As always, share your thoughts below.

CULVER CITY, Calif., May 22, 2012 -- Sony Pictures Entertainment confirmed that six minutes of the highly anticipated film The Amazing Spider-Man(TM) will be shown in IMAX® 3D and other select theaters with Men In Black(TM) 3, it was announced today by Rory Bruer, President of Worldwide Distribution for Sony Pictures Worldwide Marketing and Distribution. The footage, which will play before the feature film, is available to fans during the engagement of Men In Black 3.
Commenting on the announcement, Bruer said, "We're thrilled to give moviegoers a chance to get an extended taste of the movie in IMAX 3D and other select theaters. The audience for Men In Black 3 is a perfect match for this footage - there's something new here for everyone, and we think this six minutes of The Amazing Spider-Man will get everyone excited for what we have in store."
"Having seen the spectacular footage I'm even more excited for IMAX moviegoers to experience this new chapter in the story of Peter Parker in anticipation of the film's release in our theaters," said Greg Foster, Chairman and President, IMAX Filmed Entertainment.
One of the world's most popular characters is back on the big screen as a new chapter in the Spider-Man legacy is revealed in The Amazing Spider-Man(TM). Focusing on an untold story that tells a different side of the Peter Parker story, the new film stars Andrew Garfield, Emma Stone, Rhys Ifans, Denis Leary, Campbell Scott, Irrfan Khan, with Martin Sheen and Sally Field. The film is directed by Marc Webb from a screenplay written by James Vanderbilt and Alvin Sargent and Steve Kloves from a story by James Vanderbilt, based on the Marvel Comic Book by Stan Lee and Steve Ditko. Laura Ziskin, Avi Arad, and Matt Tolmach are producing the film in association with Marvel Entertainment for Columbia Pictures, which will open in theaters everywhere in 3D on July 3, 2012.
The Amazing Spider-Man is the story of Peter Parker (Garfield), an outcast high schooler who was abandoned by his parents as a boy, leaving him to be raised by his Uncle Ben (Sheen) and Aunt May (Field). Like most teenagers, Peter is trying to figure out who he is and how he got to be the person he is today. Peter is also finding his way with his first high school crush, Gwen Stacy (Stone), and together, they struggle with love, commitment, and secrets. As Peter discovers a mysterious briefcase that belonged to his father, he begins a quest to understand his parents' disappearance - leading him directly to Oscorp and the lab of Dr. Curt Connors (Ifans), his father's former partner. As Spider-Man is set on a collision course with Connors' alter-ego, The Lizard, Peter will make life-altering choices to use his powers and shape his destiny to become a hero.
In Men In Black(TM) 3, Agents J (played by Will Smith) and K (played by Tommy Lee Jones) are back... in time. J has seen some inexplicable things in his 15 years with the Men In Black, but nothing, not even aliens, perplexes him as much as his wry, reticent partner. But when K's life and the fate of the planet are put at stake, Agent J will have to travel back in time to put things right. J discovers that there are secrets to the universe that K never told him -- secrets that will reveal themselves as he teams up with the young Agent K (played by Josh Brolin) to save his partner, the agency, and the future of humankind. Barry Sonnenfeld directs the film. The film's screenplay is written by Etan Cohen, based on the Malibu Comic by Lowell Cunningham. Walter F. Parkes and Laurie MacDonald produce, and Steven Spielberg and G. Mac Brown are the executive producers.
About Sony Pictures Entertainment (SPE) is a subsidiary of Sony Corporation of America, a subsidiary of Tokyo-based Sony Corporation. SPE's global operations encompass motion picture production and distribution; television production and distribution; home entertainment acquisition and distribution; a global channel network; digital content creation and distribution; operation of studio facilities; development of new entertainment products, services and technologies; and distribution of entertainment in more than 159 countries. For additional information, go to http://www.sonypictures.com/
SOURCE Sony Pictures Entertainment
Posted by Scott Mendelson at 10:13 AM

They don't know what they're doing anymore. I hope this grasping at straws approach has some interesting consequences but I fear it will fall short of mildly distracting. Death to Cinema! Bring back Old Timey Radio Plays!

But...he actually has web shooters this time. WEB SHOOTERS!!! But in all seriousness, I do like what I've seen in the trailers. I like that it looks like Spider-man will be more witty, and wise-cracking. I just hope that there are more moments like that than the 2 they've shown in the trailers. For me, I don't think I'm as hyped about this more as I was for the Spider-man 1 and 2 because a)I've seen a Spider-man movie before, unlike when I saw Spider-man 1 and b) unlike when seeing Spider-man 2, I did not enjoy the previous movie at all. So, there is a bit of trepidation when seeing this movie, similar to what I felt when seeing Batman Begins and X-Men: First Class. Hopefully, this new Spider-man will be almost as good as those movies, and change my feelings about the franchises.

That's a very fair comparison, re- Batman Begins and X-Men: First Class (the latter of which was arguably more of a prequel than a reboot, continuity issues aside). Of course, if this film is anywhere near as good as those two, then Sony will be hoping/praying that Spectacular Spider-Man breaks out ala Bourne Supremacy/Pirates 2/etc. And yeah, the anticipation for the first Spider-Man was palpable because 'we were finally getting a Spider-Man movie!!'. You can't replicate your first time, which is something that Fox is going to learn the hard way with its Fantastic Four/Daredevil reboots.