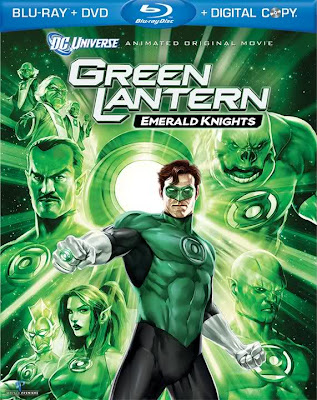 The interesting thing about the Green Lantern mythology is that it is full of characters who are equal to, if not superior to, our hero in any given story.  Sure, Batman may have (or once had re current continuity) the likes of Robin, Nightwing, Batgirl, Spoiler, Azrael, Huntress, and any number of others, everyone knows that Batman is the top dog in the Gotham vigilante scene.  But Green Lantern, whichever one we happen to be following at the moment (be it Hal Jordan, John Stewart, Kyle Rayner, Guy Gardner etc), is just one of a gigantic interplanetary police force.  Point being, the Green Lantern corps is a vast army that makes for rich storytelling potential, as you can pick anyone of those countless galactic cops and fashion a compelling narrative.  And that's just what this latest DCAU film happens to be.  Yes it technically stars Hal Jordan, but it is more about the deep and vast mythology within the Green Lantern corps itself, and the various heroes within.

A token amount of plot:  As the home planet of the Green Lantern Corps faces a battle with an ancient enemy, Hal Jordan (Nathan Fillion) prepares new recruit Arisia Rrab (Elizabeth Moss) for the coming conflict by relating stories of the first Green Lantern and several of Hal's comrades.  And that's basically the gist of it.  We get a look at the very first Green Lanterns, we get a look at Kilowog (Henry Rollins) and how be became such a bad-ass, we learn how Bolphunga (Roddy Piper) met the Green Lantern known as Mogo (Steve Blum), we get a look at Laira's (Kelly Hu) family complications, and we get a bit of back story on Abin Sur (Arnold Vooslo), which sees him teaming up with Sinestro (Jason Issacs) and debating the concept of destiny versus free will.  And finally we get the conclusion of the present-day threat, as the Green Lanterns combine their might to save the entire galaxy from a seemingly unstoppable foe.

Some of these stories are more engaging than the others, but all of them offer worthwhile peaks into the world of the Green Lantern corps.  For a novice such as myself, it works as a cliff notes primer on a few of the major Green Lantern characters and their general personalities.  I'm partial to the Kilowog and Abin Sur adventures, but you'll probably have your favorite as well.  All of these mini-epics are lushly animated, impeccably acted, and filled with the kind of big-scale action that the Bruce Timm-shepherded DCAU is known for.

For the record, Green Lantern: Emerald Knights is not in any way a continuation or a sequel to Green Lantern: First Flight, which was a fine film on its own.  Those overly excited by the idea of Nathan Fillion voicing Hal Jordan may be a little disappointed, as he mainly acts as the narrator to other Lanterns' adventures.  But for those primarily concerned about the film itself, this is one of the better DC Animated Movies to come down the pike.  It benefits from the rich mythology of its source, a longer-than-usual running time (at 84 minutes, it's the longest DCAU movie by about ten minutes), and the lack of constraints that comes from not being an adaptation of a known comic book arc.  Whether as a primer for the upcoming Martin Campbell Green Lantern film, or merely another set of Green Lantern adventures, Emerald Knights is a solid entry in a solid cannon.

The Blu Ray - Looks great, sounds great, etc.  As for the extras, they are the usual solid mix of infotainment and advertising.  Aside from the usual DVD copy and Digial Copy of the feature, we get a filmmaker's commentary, two Batman: the Brave and the Bold episodes, two 3-minute featurettes on certain characters (Abin Surin and Laira), a ten-minute 'first look' for the last DCAU movie (All Star Superman), and a ten-minute first look at the next DCAU movie (Batman: Year One).  As for that last bit, the new film looks promising in theory, but I'm curious how a film that is apparently non-stop voice-over narration will play out.  And as much as I constantly whine about how everyone credits Frank Miller with making Batman 'cool' again (he had been cool since 1969), I will confess that Miller certainly established Jim Gordon as a credible dramatic character.  Anyway, the two meatiest extras are two mini-documentaries.  "Only the Bravest: Tales of the Green Lantern Corps" is a solid 31-minute primer on the whole Green Lantern mythology.  The other meaty piece is the 18-minute "Why Green Lantern Matters: The Talent of Geoff Johns".  Both are fun, engaging and informative, although obviously they will be of more educational benefit if you know less about the characters going in.  Alas, there are no DC Presents short films this time around.

So we have a solid film, terrific presentation, and a decent selection of extras.  This is certainly recommended viewing, and a worthy purchase for fans of the character and the genre.
Posted by Scott Mendelson at 12:05 PM

Just an FYI from someone who's read way too many comics than is healthy, Mogo is the GL that Bolphunga encounters, not Oa (though given Mogo's nature, that's an easy mistake). While I haven't seen it yet, I'm guessing this is an adaptation of the short story "Mogo Doesn't Socialize."

Gosh, you f*&$ nerd! I kid, seriously, thanks for that. Yes, the phrase "Mogo doesn't socialize" does come up, so it really was just a typo that I didn't have the insider knowledge to catch. Again, much thanks.

I enjoyed it, I did, but unless I missed something obvious and vital in science class; why is the anti-matter weak against the positive-matter it was attacking? If it was going after Oa, would they not just be able to let it attack Oa than use it to defend itself?

The egg does not survive any better a fall to the floor than if the floor were to fall onto the egg.