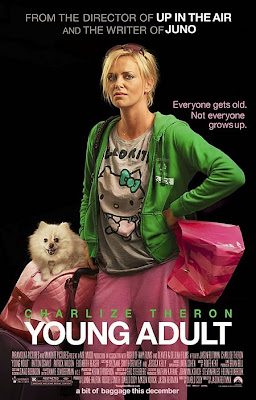 I have often written about what I feel is a distinct double-standard when it comes to the relative morality of female protagonists (or even major female supporting characters) compared to their male counterparts.  Put simply, a male character can be a murderous criminal or a duplicitous emotional con-man and still be considered an 'anti-hero' if not a hero if he's doing it for a (pick one) hot girl, child, and/or animal.  But female characters are often judged as 'unworthy' (read - 'bitches') if they exhibit the slightest bit of selfish impulse and/or self-interest, and/or if they show the slight amount of characteristics which may be classified as 'unsympathetic'.  Male characters of this nature are considered 'complex', while female characters are considered 'unsympathetic' or 'unable to connect with audiences'.  Jason Reitman and Diablo Cody's Young Adult will be an interesting test case.  Aside from its other merits, it represents a star vehicle for a major actress (Charlize Theron) whose primary character does not bravely overcome adversity but rather openly causes adversity to those around her.


A token amount of plot - Like a lot of people, Mavis Gary (Charlize Theron) arguably peaked in high school.  During her teen years, she was a prime member of the 'popular crowd' and someone who theoretically would go on to great things after leaving her small town Minnesota birthplace.  But nearly twenty years later, life has not been kind to Ms. Gary.  While she still has her looks, her employment as a ghost writer for a popular young-adult series is about to end and she remains unattached following the dissolution of her first marriage.  After receiving a mass email from her high school flame announcing the birth of his first child, Mavis convinces herself that Buddy Slade (Patrick Wilson) needs to be saved from his small town suburban existence and drives back home to 'win him back'.

What's interesting about this particular narrative is how much it resembles the plot line of any number of male-driven romantic melodramas.  You know the one: a hometown boy made good who comes back to his birthplace and A) realizes what he's missing and B) rekindles a romance with his childhood sweetheart who of course was the right girl for him all along.  Heck, two television shows in recent years (Ed and October Road) revolve entirely around this premise.  Taken purely at face value, Young Adult works as a gender-switching skewing of these absurd fantasies.  But Cody and Reitman have other fish to fry as well.  Centered around Theron's bitingly witty performance, the film presents yet another example of arrested development, the kind of immature refusal to 'grow up' that we see in any number of bawdy male-driven comedies.  What is doubly-refreshing about the picture is that, aside from Mavis's queen-bee snark and plotting, pretty much every other character in the film is a genuine grown-up.  Sure, some of them have their issues, but there is a refreshing maturity to how they deal with the human cannon ball that is Mavis.

The film eventually comes down to two very strong central performances.  That Charlize Theron is fantastic is almost a cliche.  If anything her consistent quality in films both good and bad has caused her to become a bit undervalued.  But more surprising is the emotionally compelling supporting turn by Patton Oswalt, surprising perhaps only because I missed his acclaimed star turn in Big Fan back in 2009.  As high school nobody Matt Freehauf, who was the victim of a brutal hate crime that left him physically and emotionally crippled, Oswalt makes a fine foil for Theron and he crafts a complex character who also peaked in high school, but only because he never got the chance to truly shine.  The rest of the cast are pure slice-of-life performances.  Patrick Wilson gives a genuine credibility to 'the one that got away' and again reaffirms his worth as a valuable character actor.  Elizabeth Reaser brings token sympathy as Mrs. Slade.  She earns audience interest in attempting to read body language as her subtle work hides whether or not she is completely aware of Mavis's intentions.  Collette Wolfe has a small role as Matt's sister, and she has at least one great scene that is fascinating in its pathos.

There is an undercurrent of sadness that flows through Young Adult, which in turn makes its pitch-black comic tone all the more potent.  While there is a certain intensity in watching Mavis barrel towards her inevitable confrontation, creates a sense of dread more than gleeful anticipation.  It is oddly enough the third major release in the last month to deal with the pain of moving past your peak and how we deal with our past 'glories'.  But despite her scheming, Mavis earns our interest not because the film attempts to create sympathy, but rather because her ideas and her actions are, if not completely logical to the specific situation, understandable in regards to how she has been groomed to see the world.  I will not divulge whether or not Mavis succeeds in stealing away her high school boyfriend and/or whether or not she learns a valuable lesson about truly becoming an adult.  But I will say that the film deals offhand with a host of relevant social issues without being 'about them' in any overtly preachy fashion.

Young Adult is a surprisingly potent and insightful dramedy, all the more effective for its understated nature and its off-the-cuff black comedy construction. The film continues Diablo Cody's exploration of how women are treated (both by men and by other women), and how the superficial societal standards of feminine success  makes all women eventually feel like failures.  It will be interesting to see how the film is received in an era where female-centric franchises (Sex and the City, Twilight) are constantly on the defensive and romantic comedies featuring somewhat flawed heroines are put on the same moral plane as The Human Centipede II.  Theron's Mavis Gary may be a somewhat unique and uncommon character to be the lead in a mainstream comedy, but if she were a he, Mr. Gary would blend right in.

From Juno to Thank You For Smoking to Up in the Air to this, is it safe to say that Jason Reitman, like Charlize Theron, is undervalued as a director? It just seems to me that he doesn't get enough recognition.

While I liked Juno well enough, I absolutely adore Thank You For Smoking and Up in the Air. Young Adult was slightly on my radar, considering the sheer amount of films hitting in December but with this review, it may have shot past War Horse, Holmes, and Mission IV in terms of anticipation. Tattoo, Shame, and Tintin are still my top three most anticipated.

Thanks for this review; I was unimpressed with the trailers but your review has me wanting to go see the film now. I do like Charlize Theron and the nuances of her performances are evident in the trailers. I really enjoyed "Grosse Pointe Blank" (which fits the mold of a comedy with an anti-hero who goes back to reclaim his/her childhood sweetheart); it will be interesting for me to see if I like this film as much.

I find it interesting that you mention all the other characters are "grown up", or otherwise functioning adults, because when I "go back" to where I went to high school, it's obvious there exists a wide spectrum of emotional maturity.

Charlize can do no wrong. Thank you for being one of the lone voices in noting how male-led dramas are lauded and awarded differently.