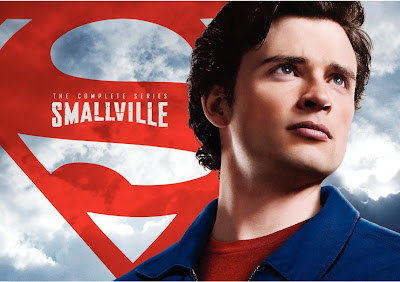 This one is pretty simple, folks.  I liked Smallville during its initial five years, when the series had a pretty clear narrative arc.  However, when the show picked up surprising ratings strength during its fifth (what was to be its final) season, the show became a giant waiting game, as the creators kept trying to arbitrarily keep the show alive through guest stars and cast replacements as the CW failed to launch successful replacements.  I gave up at the end of season seven, although I kept up with major plot points and did tune in for the series finale last May.  By the time Clark Kent became Superman, it was the definition of anti-climax.  He had already gone through pretty much all of the major Superman beats and encountered pretty much every major friend or foe that the he had already been Superman in all-but name and costume for four or five years already.  Still, through hell and high water, the show was an uncommonly ambitious bit of fantasy storytelling, revamping the Superman mythos in a way that made sense for series television and creating its own mythology that can stand alongside the movies, Lois and Clark, Superman: the Animated Series, and the comic books themselves as a 'proper' Superman epic.

But if you're even considering buying this massive and relatively expensive box set, you probably already hold the show in pretty high regard.  So this set is a no-brainer if you like the show and haven't bought the majority of the seasons on DVD in prior years (due to quality issues with the first season or two, it is unlikely that the earlier years will ever be re-released on Blu Ray).  So let it be known that the series is contained on 60 discs, all of which fully replicate the bonus features (commentaries, deleted scenes, featurettes, etc) that were found on the standalone releases.  The big bonus is two new discs worth of "new" material.  I use quotes because at least 2.5 hours of this 'five hours of new material' is actually stuff we've seen before (the terrible 90 minute Secret Origins DC Comics documentary that is now included on every DC box set as required by law and the Aquaman pilot that has also appeared elsewhere).

Among the truly new material (including the 1961 Superboy pilot, the final SDCC Comic-Con panel, a specially-made Daily Planet newspaper, etc), only two pieces are worthy of note.  First off, you get the 2004 Paley Fest event.  If you've been to one of these, you know it's a fun and informal cast/crew Q&A that generally brings out the best in everyone and actually runs long enough to offer real insights and details.  The big offering, one that was previewed at this year's New York Comic Con, is a 100 minute retrospective documentary.  While 100 minutes to explore ten years of a series is a bit slight, the content that is offered is pretty solid.  Among the tidbits is an admission by Tom Welling that he indeed was learning how to act on the job, and yes that does explain why Clark was a bit stiff in the first season or so.  Anyway, if you're a fan of the series, this is a terrific little documentary, and one I hope will be offered as a separate purchase for those unable to afford the hefty price-tag of this box set.

So, ten seasons worth of television, about twenty-eight hours of extras, five of which are 'new', all in a box that is so heavy that Kal-El himself would break a sweat trying to lift it.  If you are reading this review because you liked the show, you haven't bought the prior seasons, and you can afford it, the Smallville Complete Series box-set is probably a worthwhile purchase.
Posted by Scott Mendelson at 4:33 PM

Really you thought the "Secret origins" documentary was terrible. I rather enjoyed it.