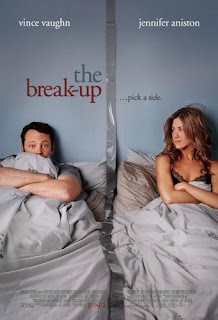 From a critical point of view, one is divided over a movie like The Break-Up. On one hand, it does attempt to be different from the usual cookie-cutter romantic comedies. And, there are a few scenes here and there that do have an element of honest human truth to them. However, as a whole, the film collapses under key narrative and character errors and eventually becomes a combination of boring and cringe inducing. While The Break-Up may be a noble failure, it still fails.

The plot, to wit Gary and Brooke (Vince Vaughn and Jennifer Aniston, respectively) meet at a Cubs game and take an immediate liking to each other. Over an opening-credits montage, we see two-years of their relationship as it progresses from courtship to living together in a rather nice Chicago condo. Alas, all is not well, and a nasty after-dinner fight ends with their decision to split up. Alas, they both love their condo and neither want to give it up, so they decide to play Solomon and split it in half, with Gary taking parts and Brooke getting parts. Alleged comedy ensues.

The key problem with this enterprise is that it stars two very unlikable characters. Gary is immediately presented as a selfish jerk, as his opening scene literally has been forcing his way into a date with Brooke even as she's on a date with someone else at the time. He eventually reveals himself as almost psychopathically lacking in basic empathy and a generally lousy human being. Why anyone, be it Brooke, or his family, or his friends would put up with him is never explained, as he isn't even presented as being particularly funny or charming.

As for Brooke, she is presented as a rather mal-adjusted needy individual who seemingly tries to win Gary back despite his complete lack of respect for her. Like many romantic comedies (like The Wedding Crashers or The Wedding Singer), the film makes the tactical error of having the female lead pining for or being engaged to someone who is such a disrespecting, abusive creep, that we lose respect for her and don't particularly care about her happy ending.

Ironically, while Vaughn and Aniston are miserable together, utterly lacking in chemistry, the cast around them shines and provides what entertainment there is to offer. Vaughn has fun sparring with Jon Favreau as his best friend, obviously playing on Swingers-nostalgia. In about fifteen minutes of screen time, Vincent D'Onofrio nearly steals the heart of the picture as Gary's put-upon oldest brother. It's his dealings with Gary's selfishness that gains our sympathy as Gary costs him more than just having to do dishes after a dinner function. By the end, we couldn't care less if Gary and Brooke get back together, but we sincerely hope for Gary to make amends to his own family. Between this, Thumbsucker, and the always-terrific Law And Order: Criminal Intent (aside from everything else he's done in the last 20 years), D'Onofrio is quickly becoming one of my favorite character actors (unlike the other braniac TV detectives, Goren is the only one who is shown learning all the stuff he will spout out later).

On Brooke's side, Joey Lauren Adams fills the best friend role but does nothing of interest with it. More amusing is Judy Davis as the insightful diva-ish boss at the art museum where Brooke works (an almost unrecognizable Justin Long hams it up as the flamboyant receptionist). Also amusing, albeit with limited screen time, is Jason Bateman as their mutual friend and their realtor. It's his big scene that sets the third act into gear.

Of course, all the great character actors in the world don't help all that much when the leads are unlikable and boring. Despite attempting to make an honest and unflinching look at a couple falling apart, the movie in the end is 102 minutes of unlikable, unsympathetic people playing hurtful head games with each other while we allegedly root for them to reconcile. Also hurting is the indecisive ending, which is a known compromise between what the filmmakers wanted and what the foolish test audiences demanded. Besides, in the end, a part of us does want them back together, if only so everyone else in the dating scene will be spared.

Grade: C-
Posted by Scott Mendelson at 11:20 PM No comments: Links to this post