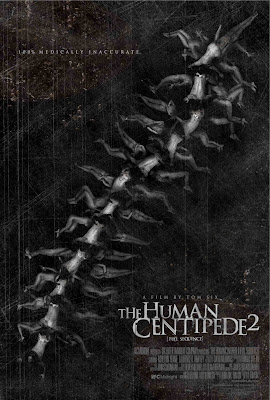 I get the joke.  Really, I do.  I get that Tom Six has made an 'up yours' movie that is basically an attack against everyone who had anything to say about the first Human Centipede (review). It sticks its tongue out at those who thought the film was grotesque and morally offensive.  It reams those who were upset at how much of the violence was suggested or off screen.  It mocks those who called it a grand piece of art, finding hidden meanings and symbolic complexities that arguably were never there in the first place.  It is a meta-film, an overt post-modernist commentary on the series, the nature of sequels, and the horror genre itself, as well as those who make and watch them.  That's nice, but The Human Centipede II is a genuinely boring and ultimately obnoxious motion picture.  Despite some genuine attempts of some kind of social commentary unto itself, the film remains only worth seeing purely for the sake of saying that you've seen it.
A token amount of plot: In our world, where The Human Centipede was indeed a fictional film, one obsessed fan of the first picture (Laurence R. Harvey) decides to recreate the original experiment.  One-by-one, he kidnaps his victims and eventually does his dirty work to create a twelve-person centipede.  And that's about it, folks.  The Human Centipede II is barely a film.  It is technically a 85-minute motion picture that promises to offend and shock on a heretofore unheard of level, a promise that guarantees disappointment by virtue of its very offering.

Yes, there are several moments of grisly onscreen violence, and since they represent arguably the film's lone 'entertainment value' I won't spoil them here.  But the movie itself is a overly presumptuous bore, working in ironically an opposite fashion from the first film.  The first picture had an unnerving and tension-filled initial half which led up to the primary 'operation'.  But after the deed had been done, the remaining forty-five minutes was merely endless nearly-silent scenes of the main victims existing in unbearable agony.  To the extent that it worked at all, it was chiefly effective for its mere suggestion of horrifying cruelty and Dieter Laser's classically villainous lead performance.  The sequel works in reverse, with a boring first half followed by a grotesque second half.

This sequel has an unbearably dull initial hour, spearheaded by a mute lead performance by Laurence R. Harvey.  Harvey's Martin has a sloppy, grotesque visual look that is in-itself a commentary on both the people who allegedly watch gruesome horror films and/or how horror fans look to the moral watchdogs who constantly decry slasher fare.  But visuals aside, the character is dreadfully dull and exists as a audience surrogate (to the extent that Six accuses his audience) rather than as an actual human being.  So for an hour, we basically watch this cartoonish character masturbating to the original film and occasionally commit a violent kidnapping while flashing back to the childhood abuse that theoretically shaped him into a monster.  There is some harsh violence here, and it's arguably more disconcerting than the final act because it feels somewhat more real compared to the 'dare to not look away' finale.

And once that final reel or so begins, it's a pretty non-stop parade of human suffering and malicious cruelty.  Again, there are about half-a-dozen shocking bits of onscreen violence, and it does indeed seem to be a response to those who complained about the comparatively subtle violence of the first picture.  But since you know going in that Six is attempting to upset you, there is a certain carnival-like nature to the onscreen gore.  No matter what symbolism or commentary that Tom Six intends, the final act is basically a game of wills.  If you look away or walk out, he wins.  If you keep watching and don't look away, you win by virtue of denying the film its primary intent.  But then, there really is no point to sitting through this kind of thing if you aren't trying to shock yourself.

There are half-a-dozen horror films I could name offhand that are more gruesome than this one, and arguably more disturbing by virtue of their respective higher quality.  The Human Centipede II is not a stupid film and Tom Six does have a few thoughts in his head.  But it is a poorly-constructed film, one without a real point beyond its simplistic satire and 'Can you top this?' violence.  It lacks engaging characters and genuine entertainment value.  To call it offensive would not only be incorrect but would be giving Tom Six a victory that he does not earn.  The most offensive thing about the picture is how it all-but flaunts its borderline incompetence and almost intentional boredom.  I get Tom Six's joke, I'm just not laughing.

I'm not a horror fan. They scare me and give me nightmares. Which I know is the point, but I just don't like the nightmares. ;)

I just wanted to write that even though I have no interest in horror movies, I read your reviews of them as I find them to be well written and engaging.

It's grizzly bear, or grisly violence. Spellcheck is of no avail.

I think, by the way, you should be awarded a critic's purple heart for viewing this cultural lemon-juice-in-the-eye.