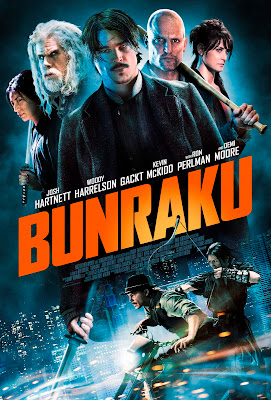 There is a certain danger to any movie that spends the first five minutes explicitly explaining why the picture looks and sounds as it does.  In this case, we have to understand why the world of Bunraku looks like a hybrid between the 1960s Batman TV show and a blood-drenched martial arts drama.  The film is certainly a case of style over substance, and the utter lack of substance may be fatal for some viewers.  But the picture boasts a unique visual palatte and some interesting ideas.  It also boasts at least two wonderful action sequences, creative in their design and accomplished in their execution, that makes the film almost worth watching.  Bunraku is not quite a good film, but it is surely a bad one worth watching for those who know what they are getting into.

The plot is pretty cut-and-dried mix of the arch typical western (a stranger walks into a corrupt town and tries to clean it up) and the arch typical Asian martial arts drama (a young man is sent on a quest by his father to win honor for himself).  The two would-be heroes in this case are played by Josh Hartnett  and Gact, as The Drifter and Yoshi, the Jin Samurai respectively.  Support or peril is offered in the form of Ron Pearlman, Woody Harrelson, and Demi Moore.  The basic gimmick is that the continuing destruction of mankind has led to a ban on firearms as well as the disillusionment of any large-scale government, which gives way to a somewhat traditional gangster saga without any actual guns.  None of this makes all that much sense, and the movie runs an obscenely long 124 minutes, but writer/director Guy Moshe is certainly attempting something a bit off the beaten path.  The world is unlikely any we have seen onscreen before, and the idea that these stock legends continue to play out again and again even in the far future is a compelling one.

But putting aside any deeper meaning behind the colorful mayhem, the film is first-and-for most an action picture.  And on that scale it is a relative success, with several solid action scenes, all of which are fluidly shot and coherently edited.  Of note are two truly wonderful action beats, both during the second act of the picture.  The first, around the 55 minute mark, is a brief one-take sequence where Hartnett defeats several enemies up and down the floors of a single building, which resembles something out of the video game Elevator Action (minus the guns of course).  The other action scene of note is easier to describe, as it's just a big fight scene set on a giant trampoline.  This is something Brett Ratner flirted with at the climax of Rush Hour 3, but we get the full treatment this time around, with two foes doing mortal combat as they bounce up and down.  The rest of the action scenes are never less than accomplished, but they are more traditional 'one or two guys beat up a whole bunch of other guys in a relatively stationary environment'.

In the end, Bunraku is a failure of coherent storytelling, but a triumph of visuals and action.  The acting is more or less serviceable (Hartnett is certainly a better action lead than you'd expect).  Too much time is spent on Harrelson's bartender, Demi Moore's long-lost love, and Ron Pearlman's overlord character, with too little payoff (as sometimes happens with boy-centric action films, the major female character gets all the worst dialogue).  The first half drags quite a bit, while the second half (starting with the aforementioned one-take brawl) gives way to a nearly non-stop flurry of worthwhile action in a colorful environment.  As for whether I recommend the film, that's more of an open question.  If you like 'these kinds' of films, then Bunraku has enough good to justify sitting through the bad.  If you're not already a fan of arty visual worlds and big-scale stylistic combat in the service of well-worn myth-making, then you probably shouldn't have been reading this review in the first place.