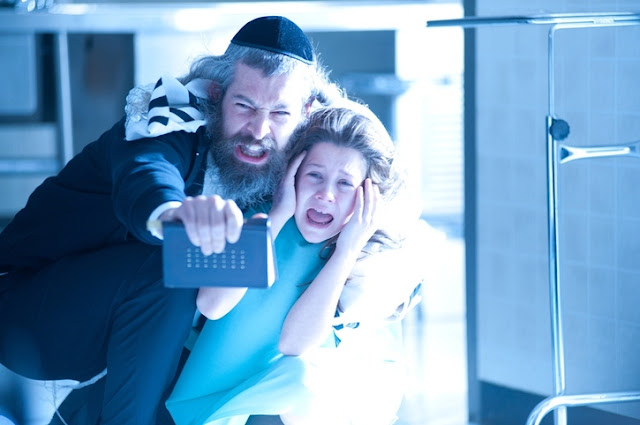 So it looks like Lionsgate's attempt to mimic the marketing campaign of their 2009 chiller The Haunting In Connecticut worked like a charm.  That (rather terrific, natch) horror drama used a single horrifying image (weird liquid supernatural gunk flying out of a child's mouth) to help snag a mighty $23 million debut in Spring 2009.  Back then, it was Lionsgate's second-biggest debut not involving a Saw sequel or a Tyler Perry film.  Today it still stands in fifth place on that scale, and The Possession just proves lightning can strike twice.  The poster focused on basically the same image and basically had the same opening weekend, grossing an estimated $17.7 million over Fri-Sun and $21 million over the four-day Labor Day holiday.  That's the second-biggest Labor Day haul on record, behind the $30 million gross of Rob Zombie's Halloween in 2007, ahead of The Transporter 2's $20 million gross in 2005 and ahead of Jeepers Creepers 2 ($18 million) in 2003 .  In terms of non-sequels/remakes, it's by far the biggest such debut, besting The American ($16 million), Jeepers Creepers ($15 million), and the obscenely underrated Balls of Fury ($14 million).

To show you how weak the Labor Day weekend usually is, Jeepers Creepers (2001) was the first film to ever top $10 million over that weekend while The Transporter was the first to top $20 million.  So moving the Sam Raimi-produced film from Halloween 2011 to this weekend was a big risk, but one that obviously paid off.  While not Labor Day per-se, this weekend (August 27th) saw the $20 million debut of Lionsgate's The Last Exorcism (also much better than you'd think), so they clearly know how to sell PG-13 horror about as well as Screen Gems. The Possession earned okay reviews for a horror film (Roger Ebert loved it) and earned a solid B grade from Cinemascore audience polling.  I don't know the exact budget but it was well under $20 million, so chalk this up as another winning horror entry for the House That Jigsaw Built.  The 'this time with Jews!' exorcism tale is actually similar to the Virgina Madsen/Kyle Gallner/Elias Koteas horror drama in that it's loosely based on a true story of a small-town haunting and attempts to tell a family drama that happens to be sprinkled with horror elements. Like the prior film, this new one has a slate of respected adult actors (Kyra Sedgwick, Jeffrey Dean Morgan, etc.) that arguably helped sell the film just a little to discerning genre fans.  Look for this one to finish between the $41 million of The Last Exorcism and the $55 million of The Haunting In Connecticut. 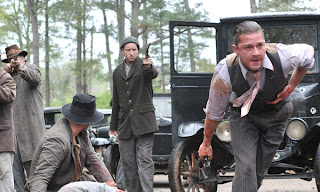 The second major opener, one of two which opened on Wednesday, was John Hillcoat's Lawless.  The Prohibition-era bootlegging crime saga stars the likes of Shia LeBeouf, Tom Hardy, Jessica Chastain, Guy Pearce, and Gary Oldman.  But only LeBeouf can be considered 'box office', so it's $9.6 million Fri-Sun number, with $11.8 million since Wednesday, isn't so much a flop as a mild disappointment.  Weinstein Company picture opened with almost identical numbers to the five-day debut of The Debt last year, which opened with $12 million over Labor Day weekend last year for a $14 million six-day total (it too debuted on a Wednesday).  But that Focus Features film had a far lower-profile debut and a little less star power (Jessica Chastain, Sam Worthington, Helen Hirren) and cost just $20 million to make.  There is a trend of on-or-around Labor Day debuts involved high-end prestige pictures of this ilk, such as the 2005 Labor Day debut of The Constant Gardener ($10 million), The Illusionist in 2006 ($7 million), and Vanity Fair in 2004 ($6 million).  The Hillcoat crime picture frankly isn't very good, so one shouldn't expect legs.  The best news for Weinstein is that The Gangster Squad isn't opening next weekend anymore.  Well, that and they already have the surefire Oscar bait The Master, Killing Them Softly, and Django Unchained coming out over the rest of the year. 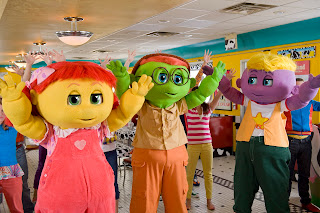 Speaking of Oscar bait, the $20 million The Oogieloves in the Big Balloon Adventure debuted on Wednesday on 2,160 screens and will not crack $1 million by Monday.  As of now, the estimate for the original kids-flick is $800,000.  That means its $447,000 Fri-Sun total gives it a per-screen average of $207, good for the second-worst per-screen average for any movie playing on more than 600 screens ever, behind only the $128 per-screen haul of Proud American on just 750 screens back in September 2008.  It's the worst per-screen average ever for a 1,000+ screen release.  Along with the equally disastrous Delgo ($237 per screen on 2,160 screens back in late 2008), the closest competitor on at least 2,000 screens is Minor League 3: Back to the Minors with $899 per-screen in 1998 and The Rocker with a whopping (in comparison) $947 per-screen in late 2008 (yeah, 2008 was a bad year for this stuff).  The film was the brainchild of one of the creators of The Tellatubbies, and I frankly admire his chutzpah in trying to convince America that The Oogieloves were some kids phenomena that we parents merely hadn't caught on to yet (Were they some PBS show we hadn't heard of?  Were they a British show that hadn't made it over here yet?).  Although the experiment is an Earth-shattering failure, and it will be ridiculed for years to come, I only take offense in that it took 2,000 screens away from older films this weekend for about $50 per screen per day.  My daughter randomly decided she wanted to see Paranorman, but we have yet to attend because it lost so many showtimes in just its third weekend that we were unable to find anything convenient in our many nearby theaters.

In holdover news, 2016: Obama's America expanded to 1,750 screens and capitalized on the RNC Convention accordingly.  With a solid $5.1 million Fri-Sun and $7 million Fri-Mon, the film has crossed $20 million and will surely surpass Sicko and An Inconvenient Truth (both at $24 million) to become the second-highest-grossing political documentary of all-time, behind Fahrenheit 9/11 ($119 million).  Premium Rush had a shockingly strong hold this weekend, dropping 35% over the Fri-Sun ($3.9 million) and ending the holiday with a $5 million four-day for a new cume of $13 million.  It's still a flop, but it proves that the genuinely entertaining little B-picture didn't deserve the dump treatment that it received.  Hope Springs dropped just 18% over the Fri-Sun frame and will end the frame with a solid $53 million cume.  Sparkle plunged like a rock from a couple weeks ago but will end its third frame with $21 million, which isn't terrible for the low-budget picture.  The Amazing Spider-Man should cross $260 million in a few days while Total Recall is at $56 million and unlikely to get any higher than $60 million. Madagascar 3 has $214 million as of Monday and it's slowly creeping up on Kung Fu Panda ($215 million).

The Bourne Legacy had an okay $9.8 million holiday frame, bringing its cume to $98 million.  It will cross $100 million this weekend, but surpassing the $121 million of The Bourne Identity is not a guarantee at this point.   The Avengers and Brave got a joint rerelease this weekend, sharing a number of screens and boosting each of their respective totals.  Brave crossed $230 million while The Avengers now sits with $619 million.  Worldwide, The Avengers hit $1.5 billion, becoming the first film not directed by James Cameron to do so. Despite sacrificing showtimes over the weekend, Paranorman had a decent $9 million Fri-Mon haul and has crossed $40 million.  The Expendables 2 earned $11.5 million over the holiday frame and now has $68 million, with $85-$90 million as a likely end point. The Campaign has $74 million and will also end up with $85-$90 million, while The Odd Life of Timothy Green will cross $40 million sometime this week.  Finally The Dark Knight Rises crossed $1 billion worldwide while pulling in another $8 million over the long holiday, bringing its domestic total to a whopping $433 million.

That's it for this weekend.  Join us for another light weekend as the Bradley Cooper/Jeremy Irons/Zoe Saldana/Dennis Quaid/Olivia Wilde literary drama The Words goes up against The Cold Light of Day, a B-movie thriller starring Henry Cavill, Sigourney Weaver, and Bruce Willis.  Until then, have a great holiday and keep reading.