When the title of your superhero sequel is a giant spoiler... 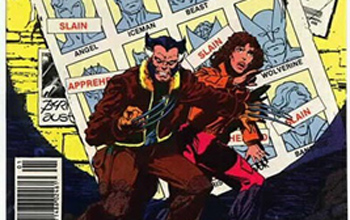 There is a reason why Chris Nolan didn't call his last Batman film The Dark Knight Returns in No Man's Land During Knightfall.  The Dark Knight Rises may have felt like a painfully generic title thought up during a 7am brainstorming session, but it kept a certain amount of mystery alive in regards to what the movie was about.  With the next wave of Marvel comic book sequels, we're also seeing something new and arguably interesting.  Instead of numerically-titled sequels (Spider-Man 2) or even somewhat generic subtitles (X-Men: The Last Stand), we're seeing sequels that are explicitly telling you what they are going to be about by virtue of their title.  By which I mean they are being named after specific comic book story arcs.  Now fans may be thrilled about seeing their favorite arcs adapted to the silver screen, but the very title is a giant spoiler.  If you've read the arc in question, you pretty much know exactly what's the movie is going to be about.

I've read "The Winter Soldier", so now whatever attempts at mystery over its central revelation are going to be lost on myself and the many many comic fans who have read it.  And while I've never actually read the whole "Days of Future Past" arc, I know the general gist from seeing the three-part season finale from the first season of Fox's 1990s X-Men cartoon (they really should make a T-shirt stating "Everything I ever learned about the Marvel Universe I learned by watching cartoons").  Perhaps by default, even though X-Men: First Class and Captain America were among the best Marvel comic book films ever, I'm somewhat more intrigued by Iron Man 3 and Thor: The Dark World, since I don't explicitly know what they are about. Of course, the idea of comic book films telling specific story arcs is a relatively new one, previously best personified by Daredevil, which mixed Murdock's origin with a loose retelling of Frank Miller's Electra/Kingpin/Bullseye saga.  In light of this current trend, $20 says that the Daredevil reboot ends up being titled Daredevil: Born Again.

Aside having a giant spoiler right in the title, these arc-specific subtitles run a risk of giving fans an expectation of fidelity and faithfulness to the source material that may be unrealistic.  Even without revealing titles, fans' expectations can be a bit out-of-whack.  I'd argue that much of the hardcore hatred of the merely okay X-Men: The Last Stand comes from the expectation that the third X-Men film would be a grand retelling of "The Dark Phoenix Saga", rather than a hybrid of "Dark Phoenix" and Joss Whedon's "Gifted" Astonishing X-Men arc.  With specific subtitles attached, the expectation of fidelity will be ever greater.  One hopes that using these subtitles doesn't prevent the filmmakers from going off in unrelated tangents.  The Dark Knight may have been inspired by several comic book stories, but it didn't have the expectations that might have come from being titled The Man Who Laughs At Soft Targets During The Long Halloween.  Unrelated tangents mean that I don't already know the plot to Captain America: The Winter Soldier before I even see a trailer.  Strict source fidelity means one merely has to read Captain America volume 5 issues 01-14.

Speaking of side tangents, there is a hidden danger to telling such iconic stories so soon in the respective series' run.  Yes X-Men: Days of Future Past will be the seventh X-Men film, but it is only the second in this specific universe and/or timeline. The Chris Claremont/John Byrne time-traveling epic played off many years two decades of continuity and character relationships.  The characters of X-Men: First Class barely know each other and have been through exactly one (1) adventure together.  It was this problem that felled Daredevil and The Dark Knight Rises.  The first confrontation between Batman and Bane was expected to have the emotional oomph of Batman's confrontation in "Knightfall", but without the year-long comic book arc that preceded it.  The death of Electra at the hands of Bullseye couldn't possibly have the tragic pathos of the comics because these three characters barely knew each other in the film version.  What these 'cut to the chase' sequels run the risk of becoming is... well, imagine if Chris Nolan attempted to tell "The Killing Joke" during the Joker's initial appearance in Gotham (a mistake that, ironically, Darren Aronofsky allegedly made in his Batman: Year One script).  These films will have to stand on their own, apart from decades of comic book continuity and relationships that gave these arcs part of their pathos and emotional gravitas.  It's also why, if Amazing Spider-Man 2 or 3 ends with Gwen Stacey falling off a bridge to her death, it will turn the series into Peter Parker: Bane of the Stacey Family.

But these are perhaps small concerns and may be irrelevant.  Perhaps the time-travelling plot of Days of Future Past may be a backhanded way to deal with continuity issues between the first three X-Men films and the prequels.  And one cannot deny the sheer joy at seeing Ed Brubaker discovering second-hand on Twitter than the second Captain America film was being named after his story arc.  As a fan of his back when he was treated like an afterthought at DC Comics ("War Games" seemed specifically designed to undo all of his work in the Batman, Detective Comics, and Catwoman books), the fame and critical acclaim stemming from his time at Marvel has been quite satisfying.  But I don't particularly want to see modern comic book films turn into the equivalent of the DC Animated DVDs, often shunning original narratives in favor of specific story arc adaptations.  I enjoy those cartoons, but that's why we have those animated features, and I wish Bruce Timm and company were more willing to tell wholly original stories rather than 'giving the fans what they want'.  I'd like to, as a comic book fan, be able to walk into the newest superhero film without knowing the basic plot just from reading the title on the marquee. I also wonder if its appropriate to require these relatively new franchises to lay the groundwork rather than skipping to the pay-off.  In other words, if you're going to play the classics, you have to play the stuff on the new album too.

Okay, Scott. I'm not sure how familiar you are with the Marvel NOW stuff that's going to be coming in October, but I'm wondering if that idea is going to be tied into this film somehow. In the All-New X-Men book coming in Marvel NOW (to be written by Brian Bendis), the original team is being transported to the present. I'm just thinking that somehow that idea is going to help bring the X-Men of First Class into the "modern" Marvel U. That's my suspicion, anyway - that it'll loosely follow Days of Future Past, but equally follow what's going on with Marvel NOW.

Re character relationships, a similar problem existed in Superman Returns between Superman and Lex Luthor. Even if everyone who had seen the movie had previously watched Supermans I and II, there still wouldn't have been any real chemistry between Brandon Routh and Kevin Spacey. They shared exactly one scene together. Compare that with Nolan's Joker and Batman, Favreau's Iron Man and Whiplash. They all started offfighting and then had very powerful "sit-down scenes and, later on, even better hero/villain fights.