The Shot Heard Round the Industry... Studios announce pre-DVD Video on Demand for major theatrical releases, and why it's doomed.. 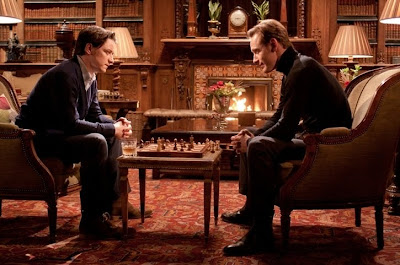 Fox, Warner Bros, Sony, and Universal have announced today that they will begin offering 'first-run' theatrical features on Video On Demand through DirectTV just sixty days after their theatrical release. Other outlets, such as Comcast and Vudo, will eventually join the fray in a limited capacity, but for now the first shot has been fired. Ironically, the two studios which will likely have the heartiest summer, Disney and Paramount, have for the moment abstained. Disney has Cars 2 and Pirates of the Caribbean: On Stranger Tides just at the start of the summer. Paramount has an uber-strong slate the entire season, with Thor, Kung Fu Panda 2, Super 8, Transformers: Dark Side of the Moon, and Captain America. Point being, they'll be counting money from May to August, so there really was no incentive to piss off the exhibitors. And the theater chains are indeed mighty pissed.

First off, the launch will begin in April, with Unknown (Warner Bros), Just Go With It (Sony), and Cedar Rapids (Fox) being available to rent (?) for $30. The short version is that theatrical releases, apparently on a pick-and-choose basis, will be available on this service just 60 days after theatrical release. As of now, Fox claims that all of its Fox Searchlight films (of which Cedar Rapids is one) will go VoD sixty days after wide release, which is interesting considering how few of them actually end up going wide (Cedar Rapids has yet to top 600 screens and is already bleeding auditoriums). It's no secret that most mainstream theatrical films do the majority of their business in the first seventeen days or so. All studios onboard are claiming that any film that is still playing strongly in theatrical will not-so-quickly end up as a home rental option, and said policy will not apply to the would-be mega franchise pictures. Of course, that puts theaters in even more of a pickle, as they have no way of knowing if a given film will end up as a Video On Demand option until after the film opens in theaters. But the real question is how exhibitors will treat the theatrical runs of films that, in all likelihood, will end up as a at-home rental option in just two months anyway.

Since two of the majors and (at this point) all of the mini-majors (think Lionsgate, Weinstein Company, and Summit Entertainment) are abstaining, will theaters give preferential treatment to the studios who don't yet take part in this program? Will Lionsgate's Madea's Family Reunion get more and bigger theaters on April 22nd than Fox's Water For Elephants? And the weekend after that, will the theater chains conspire (for lack of a better word) to slightly level the playing field for Weinstein Company's Hoodwinked Too and Disney's Prom against Universal's Fast Five? Will The Hangover 2 end up in just 1,500 screens while Kung Fu Panda 2 gets 4,000 a day prior? Will, as David Poland suggested, the theaters limit the opening weekend potential for major franchise pictures like Harry Potter and the Deathly Hallows part II by simply not running the film on as many screens? And just what will happen when a studio's major theatrical release gets kneecapped because everyone is staying at home watching their previous theatrical release from 60 days ago? This is going to get very interesting, and possibly quite a bit bloody.

But all of this speculation presumes that audiences are even interested in 'premium pricing' On-Demand rental services. And the system as set up seems doomed to fail for one very specific reason: the very people who can wait 60 days to watch a movie at home are generally the kind of people who can wait 90-120 days to watch that same movie at home. The 'wait for Netflix' crowd are willing to wait precisely because they don't need to see a movie right when it comes out. They can wait and see it in a three-to-four months when it becomes available in their queue. And, generally speaking, these casual moviegoers are damn-sure not going to pay $30 a pop to watch a movie in their home when they can wait and see it for basically $1.

I'm a movie nerd, and I've said before that I'd gladly pay a premium price to watch a new release at my home... over opening weekend. When you toss in two tickets plus babysitting for a few hours, you're already over the $30 threshold, so paying $30 to watch Water For Elephants at home would be a great deal for me... if it were right when the movie came out. But if I've already decided to wait for a specific film, either because my wife wants to see it and getting a babysitter isn't possible right away, or I just don't need to see it in theaters, I'm probably not going to pay $30 just to see that movie thirty days earlier than I otherwise would for basically nothing (I rent my films through Blockbuster Online, which is a flat monthly fee). And if I'm going to pay $30 to see a movie long after its theatrical premiere, I am generally going to wait for the Blu Ray and pay to own said movie for all time.

But let's pretend that I'm willing to pay $30 to see Water For Elephants in mid-June (after all, it's no secret that I have a new baby due right then). After all, my maybe my wife wants to see it and I, as a film nerd, have a certain disposition to seeing movies as quickly as convenient. Maybe some of you who read this blog feel the same way. But would your friends, neighbors, or family give a crap about seeing a film 30-60 days earlier than they would on DVD for a 30x up-charge? The studios are always babbling about 'more options' when it comes to entertainment, which is how we end up with same-day releases on DVD, Blu Ray, OnDemand, iTunes, etc. But this new system doesn't give audiences more options. It merely ends one option earlier than normal and forces audiences to choose between paying $30 for a secondary viewing option now or $1-5 for that same viewing option a month or two later.

If 'premium' theatrical Video On Demand is going to work, regardless of whether it SHOULD work, it has to be within the first ten days of opening weekend, if not right on opening weekend. If you're a sports fan, ask yourself: would you pay $60 to watch a prize fight or NFL playoff game even 48 hours after it happened? But studios are loathe to commit to basically cutting off their primary distribution source, and they know that the theater chains would eventually just stop booking those films anyway. In the end, and this applies to the current pricing system as announced today as well, the films that will get hurt are the smaller pictures, the genre thrillers and character dramas that are so difficult to get funded anyway. So I'll end this by asking you, the reader: what do you think of the new Video On Demand system? What would you be willing to pay when for alternatives to theatrical viewing of a given film? How do you think the theaters should respond? Is this the beginning of the end, or merely the end of the beginning?

I'm think about this from the college student perspective. People hanging out would only justify paying that much to watch a movie if there were a lot of people to split the cost; perhaps too many that could feasibly gather around your average sized television and have a decent viewing experience. Maybe I'm naive but isn't VoD for $30 piped into homes before the DVD release a prime opportunity for piracy?