Less than Meets the Eye: more thoughts on Memento. 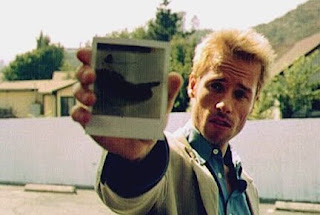 In regards to the backwards structure of this film, I will be referring to the order of the events as they occur in the film, rather than how they occur chronologically. Thus, the “beginning” is what happens when the film starts and the “climax” is what occurs around the 107-minute mark. And, if it needs to be stated, SPOILER WARNING from here on out.

Whenever someone asks a question relating to the meaning or point of life itself, the number 42 can be uttered in response as a cheap joke. If someone nearby laughs, then they obviously have read at least one part of the late Douglas Adams’ classic six-part Hitchhiker’s Guide to the Galaxy trilogy (no, that’s not a typo). * Set immediately after the Earth was blown up to clear space for intergalactic construction, the epic satirical saga dealt with the ultimate question and the ultimate answer. The big joke, of course, was that the answer to life, 42, was revealed about halfway through the first book. For the next four novels (and one short story), our intrepid explorers charted about the galaxy hunting down the question of life.

Science fiction has often been considered an outlet for attempting to answer the great questions of life or social mores that could not be discussed in a present-day setting. This concept made the Hitchhiker trilogy all the more humorous. Here we had a science-fiction epic in which the ultimate answer was rendered moot. They had the answer, but it meant nothing without the question. In contrast, the mystery genre contains a much simpler principle. Aside from sub textual meanings that may or may not apply to any given detective story, the general goal is as so: the solving of a puzzle, and the explanation of how they mystery was solved, be it by the detective, the culprit, or a third party. In the simplest sense, the point of a mystery film is the solving of the mystery.

Released in March of 2001, Memento is a mystery picture where the climax reveals that there was no mystery to begin with. In Memento, like the Hitchhiker series, the answer to the question is actually the question while the answer itself provides only more questions. Directed by Christopher Nolan, Memento concerns the alleged hunt for the man who allegedly raped and murdered the protagonist’s wife. Of course, the catch is that our hero is suffering from short-term-memory loss, which renders him unable to create new memories. Starting with the point-blank execution of the man, John G. (but his friend’s call him Teddy), whom Leonard Shelby (is that his real name?) deems responsible for the above crime, the film traces the week or so prior to this murder, flowing in reverse chronological order. Of course, the last act reveals to Leonard that there is no mystery to solve, no murdered wife to avenge (there never was as she survived the initial assault), and thus no real reason to continue living. In the end, he decides to use his condition to forget this fact so that he can continue to live his life with an actual purpose.

On the surface, Memento contains many of the characters that populate both hard-boiled detective films and film noir (though it is worth noting that Memento is not a true piece of film noir as it’s characters have no illusions to be shattered about the existence of heroes). First off, we have the gruff, intelligent, and determined detective character, played by Guy Pearce. We also find the femme fatale (Carrie-Anne Moss), the sidekick who may or may not be helping our hero (Joe Pantoliano), and the mysterious tough guy who gets into a couple of scrapes with the avenger (Callum Keith Rennie). Of course, as the story progresses, we discover that none of these characters are actually playing the part as convention dictates. The reason that these characters do not behave according to convention is that, in the end, there is no logical reason for them to do so. The mystery conventions apply to stories that actually follow the majority of the rules pertaining to mystery films.

Since Memento violates the definitive guideline (that there must actually be a crime to solve and a culprit to catch), it is thus under no obligation to play by any of the other rules. Due to the structure of the film, the characters only seem to be behaving as the genre demands. For instance, as the film progresses, the character of Natalie (Moss) progresses, like the standard female lead in a hard-boiled tale, from a friendly helper to a lover to a femme-fatale character who may or may not be using the detective for ulterior reasons. Chronologically, however, her character development is actually backwards as she “progresses” from a mean, vindictive, manipulative antagonist to a helpful, friendlier romantic interest who provides Lenny with the key piece of information that allows him to apparently close the case in question. Similarly, Teddy (Pantoliano) chronologically progresses from a crooked, greedy, opportunistic creep to a helpful, sympathetic cop who becomes trapped in a game that he unwittingly put into play by trying to help Leonard way back when.

So, in the end, Memento is a mystery film where there is no real mystery for the characters to solve and one where the classic conventions and character arks only appear to be followed due to the structure of the picture. There is a certain irony to the whole idea. If one plays the film backwards, like intended, the narrative is backwards but the trappings of a by-the-numbers mystery tale seem set in their proper place. But if one were to play the film in chronological order, the narrative would be in its proper place but the required character development would in fact be in reverse.

Of course, the grandest trick of Memento is that the true mystery of the piece is not one for the characters to solve but rather one for the audience to deduce. What really happened in the film? How much of what Lenny tells us about him and his past is really true? There are hints throughout that his lack of a short term memory may in fact be a case of selective forgetfulness which has been conditioned into him since his wife’s death (at his own accidental hand, it turns out). This would help explain how he actually remembers that he has short-term memory loss when his brain “resets” despite the fact that his wife’s attack is the last thing he claims to remember. And there are several instances where characters refer to him as Sammy Jenkins (the man who allegedly had the same condition as Lenny and whose insurance claim Leonard dealt with before his accident) despite the fact that they have not been told Sammy’s tragic story. Is it a coincidence that the actor playing Sammy (Stephen Tobolowsky) does not utter a single word of dialogue throughout his scenes? Is Lenny really Sam Jenkins?

The ultimate triumph of Memento as a film in the mystery genre is that the real mystery begins only after the movie ends. Which, like the rest of the film, is another convention played out in reverse. And, like the best mysteries, in fiction and in life, it is fathomable that we are doomed to never know the answers we so crave.

Scott Mendelson
In the category of tragic irony, I was writing the opening paragraph for this piece at the very moment that Douglas Adams was having his fatal heart attack several days ago.

Posted by Scott Mendelson at 8:31 AM