Wondering about The Wolfman? Well, remember The Alamo. 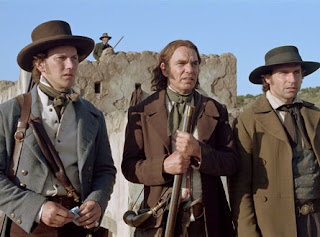 I admit my dislike of the finished Wolfman film colors my perceptions regarding its delays, but this is not the first time that studios have tried to go cheap only to end up getting financially burned. If you recall, Disney refused to greenlight an R-rated, $200-million, 3-hour version of The Alamo starring Russell Crowe and directed by Ron Howard (both fresh off A Beautiful Mind). Fair enough, such a movie would have been too costly to reasonably make its money back. Instead, they wanted to go cheaper and PG-13, so they hired John Lee Hancock (fresh off The Rookie) and cast solid but unbankable names (Billy Bob Thorton, Dennis Quaid, Jason Patrick). Alas, delays caused the budget to balloon from the original $95 million price-tag to $140 million. So, instead of just demanding that Howard and company simply reduce their budget, Disney was left with a compromised (if decent) 137-minute, PG-13 picture that cost $140 million and starred absolutely no one who could open a movie. And, sure enough, The Alamo grossed just $22 million in the US and John Lee Hancock didn't work for five years until The Blind Side ('living well is the best revenge'). All of this just to save $60 million and win a commercially useless PG-13. Nice work...