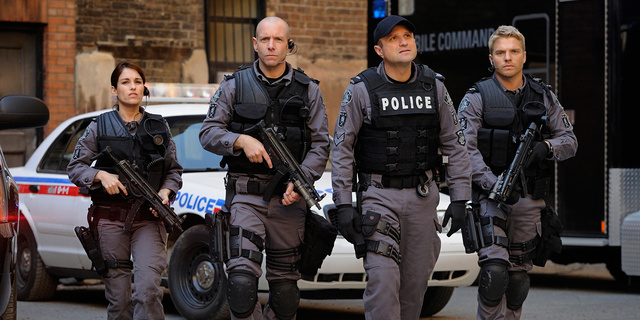 I don’t hold it against you if you've never heard of Flashpoint. It’s a show that has flown under the radar to American audiences since its beginning. Constantly being shifted around in time slots and networks for the last five years makes it difficult to maintain a regular audience. But there’s a reason the show should matter to you. While its end draws near (the series finale airs in only a few weeks on American television), its legacy to the American television business model will stand the test of time.


Let’s travel back to the beginning of 2008. The WGA (Writers Guild of America) was at the height of a major work stoppage after negotiations between it and the studios broke down and those same studios were starting to run out of scripts to shoot for the current television season. With no end in sight, it wasn't long before they became hungry for content.  A few months earlier, writers Mark Ellis and Stephanie Morgenstern had developed a television movie and eventually a pilot for Canadian broadcaster CTV called “Critical Incident.” Now, it’s not unusual for foreign broadcasters to try and strike a few distribution deals for a series. But it’s usually done after the show has aired a few episodes in its home country. And these deals (at the time) were almost never struck with any of the four major US broadcasters (CBS, NBC, ABC and FOX).

But due to its unique timing, when executive producers Bill Mustos and Anne Marie La Traverse walked into CBS they had the distinct advantage of having a quality series ready to begin production on thirteen episodes with its Canadian broadcaster. In a very unorthodox move for the number one broadcaster, CBS agreed to air the show on their network as well as contribute to the show’s development in pre-production. History was made at that moment. Flashpoint would become the first Canadian show to air in prime-time on US broadcast television since Due South but more importantly, it would be the first one in US history set completely in a foreign city (Toronto).

This deal was announced January 29th, 2008.  The WGA strike ended on February 12th, 2008.  On March 5th, 2008 CBS announced Flashpoint would premiere in July of that year. CTV announced the following May it would simulcast the show with its American associate. Since the airing of “Scorpio” on July 11th, 2008, Flashpoint has been a major success in its home country. Winner of multiple Gemini awards and setting ratings records, the show has been proven a success.  On our side of the border, the show proved success enough for CBS to not only keep airing but also use as a mid-season replacement in its second season. And this is where Flashpoint’s legacy was cemented.

Hollywood studios are notorious for copying each other when one comes up with a new business model that works. It wasn’t long before other networks (mainly ABC) began to take notice of CBS’s lucrative success from its airing of the Canadian cop drama.  On June 24th, 2010 ABC premiered Rookie Blue. It's a drama about the beat cops of Toronto. The show is produced by E1 Entertainment and the Global Television Network. This trend continued on broadcast networks with the airing of shows such as Combat Hospital and The Bridge. But it didn't end there. The trend of foreign countries going into business together trickled into the cable realm with shows such as Starz’s co-production of Torchwood, Cinemax’s co-production of Strike Back, the upcoming Transporter series and its airing of BBC’s Hunted, and SyFy’s upcoming airing of Continuum.

Do I believe that Starz called up BBC to co-finance Torchwood because they saw Flashpoint? No. But I do believe the trickle effect of producers talking to each other and that chain starting at CBS did influence the rest. We are no longer living in the age where the US is the only exporter of entertainment. But more importantly, we are starting to become the importers. Flashpoint’s legacy is that it proved the US audience is not as jingoistic as our networks chose to believe. The truth that came to light thanks to Flashpoint is that we like our programming lean and mean. The fact that the show is set in Toronto and wears its Canadian badge proudly couldn't matter less to its American audience.

And while it may leave the airwaves with a passionate, but small American audience, it will forever be remembered as the show that set off the chain reaction that broke an old and useless distribution model.  To quote Bill Mustos as he was told by a CBS executive during his first meeting on Flashpoint, “We’re ready for this.”
Posted by Scott Mendelson at 12:51 PM