Why Eddie Murphy should work with Tyler Perry... 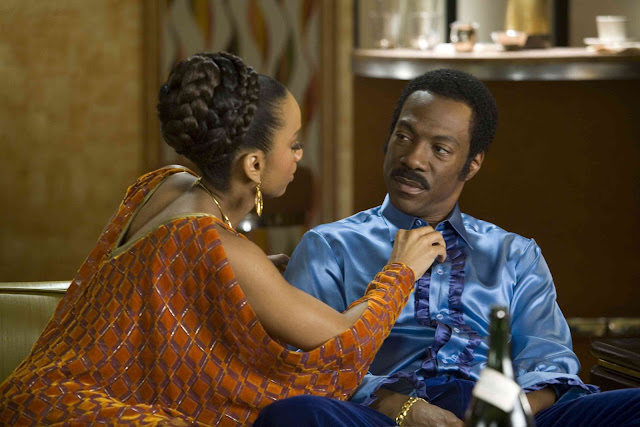 Over the next week or so, I'll start posting my 'best/worst/etc. of 2012' lists. Among the films appearing on my 'underrated' list is Eddie Murphy's A Thousand Words. As longtime readers know, I often use my 'underrated' list to discuss films that, while objectively bad, didn't quite deserved the critical bruising they received and/or have nuggets of interest hidden inside the relative failure. But for now I'd like to merely acknowledge that Eddie Murphy is and arguably always has been a fine dramatic actor. Everyone was astounded by his nearly-Oscar winning turn in Bill Condon's Dreamgirls six years ago, and I'd argue that the key to said performance was his willingness to not go big during what could have been big dramatic moments (re - the scene where he drowns his artistic rejection by silently cutting a line of cocaine). Point being, it was less of a revelation than the mere fact that Murphy doesn't get to to do pure dramatic acting all that often (you could arguably count Life way back in 1999). As I wrote when A Thousand Words came out, Eddie Murphy has little desire to resurrect the Eddie Murphy of the early 1980s, and for arguably good reason (he's not exactly a kid anymore).  But if Mr. Murphy does want to change up his routine a bit, then the best avenue would be to try a few more pure dramas, or at least films which required dramatic performances.

But who among the Hollywood elite actually makes dramas for African American actors?  Oh right... Tyler Perry does.  Heck, outside of the Oscar season, Tyler Perry is arguably the only mainstream director who makes studio-funded *dramas* at all.  While he may be best known for playing Madea (who is a supporting character in around half of his films), Tyler Perry is above-all-else a maker of melodramas that happen to feature mostly African American performances.  So what would such a teaming bring about?  Well, first and foremost, Eddie Murphy would be working on a production where he's not the most powerful person on the set, something he only does once or twice a decade.  And Tyler Perry would be in a unique (to him) position of making a film where he is not arguably the biggest star in the film (assuming he chooses to appear onscreen at all).  And those who would otherwise ignore or automatically write off Tyler Perry's films would have to sit up and take notice, since this was now an Eddie Murphy vehicle.  Murphy would have the benefit of working in a relatively foreign sandbox, under a director who would be unafraid to, I dunno, direct him.

I have no idea whether such a clash of titans would produce a high water mark for either of the above, but I have long wondered about the potential for such a team up.  I can't be the only one optimistically intrigued by the notion of both of these major stars (who yes, both happen to be African American) stepping well outside their comfort zone and seeing what transpires.  And while they're at it, they can bring Tony Todd on-board as I'm sure he'd love a straight dramatic role where he doesn't have to kill people or ominously warn about *death*.  Because for those who yearn for some kind of cinematic comeback (for the sixth or seventh time?) for Eddie Murphy, it ain't gonna happen unless he's willing to take a real chance.  The risk of failure may be high, but the possibility of mutual success is too promising to ignore. So what do you think?  Is an Eddie Murphy dramatic vehicle helmed by Tyler Perry a match made in cinematic heaven, or more ripe for cinematic hell?

But why does it have to be in a Tyler Perry film that he makes a dramatic turn. Why cant it just be in any movie, by any director of worth, and not necessarily a film that centers on African American issues.

I have not really been a fan of TP, but I think Directors like Clint Eastwood, Stephen Soderbergh, Quentin Tarantino and many others have had multi ethnic dramas where race was never any kind of issue. Hell I'd love to see Eddie in an Apatow or Todd Phillips comedy that has it's dramatic beats.


Being in a Tyler Perry movie would just be another pigeonhole.

A) It would be mutually beneficial for both respective parties. B) As I mentioned above, he's pretty much the only major filmmaker who routinely makes old-school dramas outside of the Oscar season, and certainly the only one who makes such star vehicles for African American actors. If QT or Eastwood or the likes want to craft a vehicle for Mr. Murphy, by all means I hope he has the sense to say yes. But the Perry/Murphy combo would be worthwhile in the sense that both parties would be venturing outside their safe zones.

i think eddie would be better suited for one for one of the fine black indie dramas we have right now. perry's movie hinder actors

How pathetic has Eddie's career become when you suggest that an hack director whose popularity may be in decline (and just cast Kim Kardashian's wax figure) may BENEFIT him?