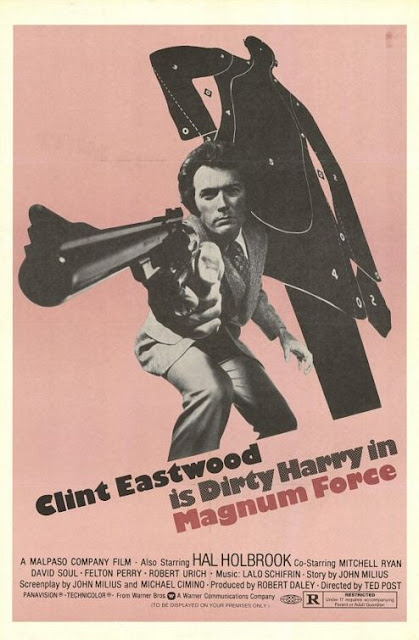 What does a woman have to do to go to bed with you?

Try knocking on the door.

Dirty Harry returned to the screens after 2 years in the follow up, Magnum Force.  The sequel deals with turning the tables on Harry making go against what he seemed to be championing himself in the first film.  Whereas Harry’s vigilantism and recklessness was arguable to solve a case and the life of a girl before her time ran out, Magnum Force’s villains are just straight up executing those that managed to weasel out of the courtroom on technicalities. While the first film did include action and violence, it was more suspense oriented.  This film ramps up the violence to another level.  The kills are ruthless and gory.  Some of the deaths in this film will even make you wince.  The film also features a lot of boobies, including those of pre Three’s Company Suzanne Somers.

One of the film’s few mistakes is forcing a couple love interests into the character of Inspector Callahan.  Both of them lustfully throw themselves at him.  One adds a little depth and information to the plot’s red herring, the other does nothing.  It's dangled that Sunny could at least be a damsel in distress, but it never really happens and you really wouldn't care if she was.  The first film was lacking a strong female presence, but didn't shoehorn one in for the sake of it.  This film tries to introduce it, but it feels incredibly unnecessary.  And to add, Eastwood was pandering to females wanting Harry to have a woman in the story that hit on him.

The film’s mystery seems quite easy, but it’s a little more complex than that.  You can probably peg who’s involved and maybe will bite on the red herring, that’s all kind of obvious.  However, how they’re involved and the ways things play out are part of the fun.  There’s also one big surprise player not revealed until the end. The cast is quite a fun mix of seasoned veteran male actors against a group of rising young actors.

At first glance, the films photography and direction looks a little standard.  However, this film is likely pioneered or was a contributor to shaping big budget spectacle action films.  There’s some really innovative stuff here.  The aesthetic looks of the typical 70's but the geography and camera movements provide quite a thrill.  There are some great car chases and shootouts filling out Magnum Force.  The film is a lot less suspense driven and more action based, and it works.

Lalo Schifrin returns to do the score and this time brings a more solid and focused effort.  The opening titles theme is highly catchy and memorable.  I wish it would have been used more throughout.  The music feels slightly of an exploitation film, but maybe that was just a typical style of the time.  It does fit with that of the first film.

Magnum Force falls just short of being as good as the first film, but it comes close.  The character of Harry Callahan is still gruff, but produces some genuine and earned laughs when necessary.  The action gets bigger and the premise of the first film is flipped on its head.  It’s a very good follow up and definitely one of the best sequels of all time.  It feels wholly original and new while also making its retreads feel fresh and new.  If you enjoyed Dirty Harry, jump right into to Magnum Force.  It’s a great time.

Up Next:  THE ENFORCER