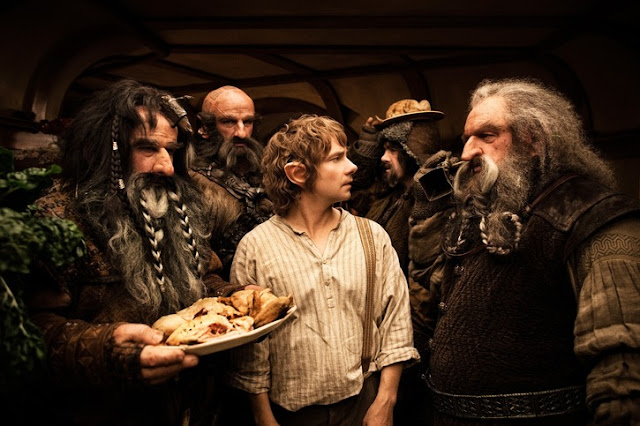 The Hobbit: An Unexpected Journey (review/teaser/trailer) basically opened like a Lord of the Rings film, give or take various variables.  Its $84.7 million estimated debut clobbered the December record, which is the $77 million earned by Avatar ($77 million, $80 million adjusted for inflation) and I Am Legend ($77.2 million, $89 million adjusted for inflation) in 2009 and 2007 respectively.  It soundly thumps the various other Lord of the Rings films, but this is where it gets tricky.  The prior Peter Jackson Middle Earth pictures opened on the weekend before Christmas week, which I've long argued is the best weekend of the year to open your picture.  So the fact that The Hobbit opened a week earlier makes this number a little more impressive, although the pre-Christmas weekend is more about legs than opening weekend.  On the other hand, the prior films all opened on a Wednesday, meaning that their would-be opening weekend was spread out of five days.  And of course, we have to take into account nine years of inflation and the whole 3D/IMAX price bump. So purely looking at inflation and comparing the Fri-Sun portion, this opening is about on par with The Two Towers ($62 million, but $84 million adjusted for inflation) and well ahead of Fellowship of the Ring's ($72 million, but adjusted-for-inflation $66 million) and King Kong ($50 million, and $62 million adjusted for inflation) for what that's worth. It's a bit behind the $72 million/$95 million opening of The Return of the King.

The film made $10 million in IMAX in the US and $15 million total.  The 450 screens showing the film in 48 frames-per-second all had robust business, earning about $44,000 per-screen over the weekend (odd, since my Friday at 6pm screening was nearly empty).  In terms of final domestic and worldwide gross (the film earned over $200 million worldwide since opening on Wednesday worldwide), we should look to other somewhat unrequested fourth film-restarts.  The Amazing Spider-Man ($262 million US/$752 million worldwide) and Pirates of the Caribbean: On Stranger Tides ($241 million US/ $1 billion worldwide) both did massive business overseas but somewhat smaller domestic takes.  The fourth PotC film, which opened with $90 million in May 2011, seems a perfectly apt example.  A similar 2.67x multiplier gives The Hobbit $227 million, but that doesn't account for Christmas legs.  The three prior Lord of the Rings pictures all had massive Christmas-infused multipliers, earning between 5.5x and 6.6x their three-day number.  However, if we count the five-day as the three-day opening (which we ought to, since presumably those who see a film over five days would have merely seen the film over three days if that was the only option), the multiplier is 4.3x ($72m/$313m), 3.23x ($106m/$339m), and 3x  ($125m/$377m) respectively for the Lord of the Rings trilogy.  Since The Hobbit: An Unexpected Journey is a prequel, it should be treated like a sequel.  So, if we look at the probable multiplier we're looking at a best case scenario of 3.25x for a domestic total of $276 million.

But the rather front-loaded nature of its first three days (it did over 15% of its weekend number at 12:01am and a mere 2.2x weekend multiplier overall) leans toward a rather frontloaded chapter compared to the prior Lord of the Rings films.  Keeping in mind that the film isn't nearly as good as the first three pictures, with little-to-no Oscar bump on the horizon, I'd argue that a 3x multiplier (ala the quick-kill but Oscar-loved Return of the King) is more likely, giving the film a still solid $255 million, or right about the same as I Am Legend ($256m off a $77m opening, for a 3.32x multiplier).  Of course, worldwide figures are harder to guess, and I'd argue it was the allure of massively increased foreign box office that was the prime reason Warner Bros. had no problem green-lighting 2 and then 3 $200 million pictures off a single 300 page book (read about its production history HERE).  I'm guesstimating that the film will indeed be another variation on the above four-quels, earned well under $300 million in the US but earning $750-$1 billion overseas, with a final number likely tipping at the higher end of that scale.  The big question is whether or not general moviegoers are jazzed enough by this (in my opinion) rather unsatisfying initial entry to be tempted to go on another two journeys with this particular team.  But since the films are basically already shot (chunks of 'part 3' will be shot this summer), it's merely a matter of hoping that this first entry basically pays for the whole three-film trilogy, as was the case with Fellowship of the Ring.

There were no other new wide releases and no real expansions of note.  So let's be quick about holdovers.  Lincoln passed $100 million last week and now sits with $107 million, with the Oscar bump still to come.  $150 million is looking quite plausible here.  Skyfall has $276 million US and $951 million worldwide while Twilight Saga: Breaking Dawn II has $272 million.  Both will flirt with $300 million.  Rise of the Guardians is showing surprising legs, which would be great if its initial opening weren't so low.  Still it's at $71 million here, giving it a (very) outside chance to $100 million along with whatever riches it can grab overseas.  Right behind it is The Life of Pi, which is at $69 million and still going somewhat strong.  Wreck It Ralph has $168 million and should end up with a rock-solid $180 million domestic total.  Red Dawn just crossed $40 million, which has to be considered a win for the much-delayed and allegedly terribly action picture.  Meanwhile, The Weinstein Company still hasn't expanded The Silver Linings Playbook beyond 371 screens, even as the movie chugs along.  It's at $16 million thus far, but at this point Weinstein may-well just wait until the late-January Oscar nominations before going wide, since as of next week it's up against Judd Apatow's This Is Forty.  Still, I was wrong last summer about the turtle-slow expansion of The Moonrise Kingdom, so I'll give TWC the benefit of the doubt here.

That's it for this weekend.  Join us next weekend for a rather crowded pre-Christmas line-up.  Wednesday sees the debut of Monsters Inc 3D and The Guilt Trip, along with the LA/NY release of Zero Dark Thirty (review/essay 1/essay 2) and Armour.  Friday sees the wide release of This Is Forty, Tom Cruise's Jack Reacher, and an 800 screen release from Paramount of Cirque Du Soleil: Worlds Away.  On Friday we also get the limited releases of The Impossible, On the Road, and Not Fade Away.  Yeah, it's gonna be busy.

"The big question is whether or not general moviegoers are jazzed enough
by this (in my opinion) rather unsatisfying initial entry to be tempted
to go on another two journeys with this particular team."


From what I'm seeing from discussion online, while The Hobbit was seen as bloated by critics,fans seem to like it just fine.


I'm guessing they're the same people who complained Tom Bombadil was not in LOTR.