One step forward, two steps back: Why the feminism and liberalism of Dirty Dancing would be 'daring' in today's marketplace. Will the remake be as relevant? 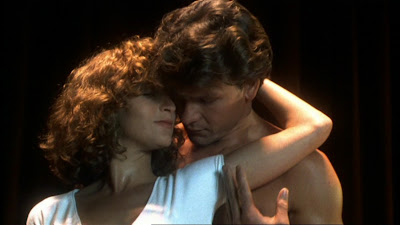 Lionsgate announced plans yesterday to indeed remake Dirty Dancing.  With pretty much every beloved 80s film going under the remake knife, it was only a matter of time before the adventures of Johnny and Baby got the revamp treatment.  So while I could use this space to rant and rave about remakes in general, and about how the  original Dirty Dancing, by virtue of being a period piece with few special effects, has not aged one bit since 1987.  But the film is among the crown jewels in Lionsgate's library, as they've put out Blu Ray/DVD reissues twice in just the last four years (to be fair, those special editions are among the most feature-packed of any catalog title this side of Blade Runner).  And there are only so many ways you can milk the same cow, so the House That Jigsaw Built has now seen fit to merely remake the damn thing and hope they don't suffer a similar fate as those behind Dirty Dancing: Havana Nights.  But there are a few things worth considering, things that both shine a light on the fallacy of the current remake-mania and shine a much grimmer light on how our popular cinema has regressed when it comes to dealing with social issues.

First and foremost, Dirty Dancing remains every bit as good or bad as you remember it from 1987.  To be honest, I didn't get around to seeing the film until just several years ago.  I had seen bits and pieces over the years, and my mother owned the terrific soundtrack (still the seventh-biggest selling album of all-time worldwide).  Watching the film in full for the first time, I was struck by how... well... good it was.  It's a simple story, a young girl's coming of age and first romance set in the early 1960s just before Kennedy was shot.  Yes the dance choreography by then-unknown Kenny Ortega was pretty solid and you can see why Patrick Swayze became an instant icon in the aftermath (even if his, or his agent's, insistence on doing action films killed his long-term career).  But what makes the film work is the strong lead performance from Jennifer Grey.  Aside from being obscenely attractive (yes, the nose should have stayed put), Grey makes Frances Houseman into a genuinely three-dimensional character, and her personal arc (realizing the hypocrisy of her parents' enlightened liberalism) matters just as much as whether or not she gets the guy in the end.

The film works as well today as it did back in 1987.  If I may digress for a paragraph, the only thing that stops it from being a very good film is, ironically, that much-quoted god awful final fifteen minutes.  Yes, everyone quotes 'Nobody puts Baby in the corner' and we all like dancing to "I've Had the Time of My Life", but the film's climax basically ditches the hard-won realism for wish-fulfillment fantasy.  The film ends on a laughably silly note.  SEE Patrick Swayze trying to reason with Grey's father (Jerry Orbach) while dressed as stereo typically 'greaser' as possible (black leather jacket, black sunglasses, slicked-back hair)! GASP at Swayze making big-speeches that are eye-rollingly dumb (witness how he lectures the audience about a backstage feud that I'm sure absolutely none of them know about or care about), while the villainous rich kid saying just the wrong thing to Jerry Orbach in order to expose his wrongdoing. BEHOLD Jerry Orbach apologizing to Swayze in that roundabout way that fails to contain an actual apology.  Finally, THRILL to the ridiculous shot of Johnny leaping mighty five-foot off the stage. And, if I may ask, what in the hell does 'Nobody puts Baby in the corner!' even mean?  It's not in the context of the scene and it's not a callback to an earlier moment.  It makes no gosh-darn sense!!   This is a shame because, up until that final ten-to-fifteen minutes, the film works as a low-key coming of age romance, with a decent arc for both Jennifer Grey and Jerry Orbach (whose liberal peons about tolerance and equality tumble once put to the test).

Anyway, point being, what made the film good and/or popular in 1987 makes the film every bit as watchable today, which makes a remake absolutely and utterly unnecessary.  It is not dated and it has not aged.  More importantly, it is a surprisingly challenging film in a way that I fear the remake will not be.  Sure we all remember the music (Swayze can actually sing!), the dancing, the catchphrases, and the respective hotness of the two leads, but how many of us remember what the movie is actually about?  First of all, it involves some knotty questions regarding the generational gap and social progressiveness.  Orbach's apparent liberalism is tested when his own daughter takes up with the kind of kids that he actually thumbs his nose at, and it is his realization of his own hypocrisy that forms much of the third-act. Also, the lead family of the original film is Jewish.  They are very Jewish, and its something that plays a part in the film (note the early bit where the girls at the resort get to try on wigs with straightened 'non-Jewish' hair) and in the characters' behavior.  I may be cheating by discussing a deleted scene, but there is a wonderful 'shoulda-been-in the film' moment where Jerry Orbach implicitly states that the reason he hates Johnny Castle is because he reminds him of the 'lower class' kids who used to bully him when he was a kid because he was a Jew.  Said moment was cut from the film, but the undercurrent is still there.

More importantly, the entire plot of the film, the inciting incident that brings Johnny and Baby together is an out-of-wedlock pregnancy and an illegal abortion.  Yep, the plot of Dirty Dancing is centered around an abortion.  Yes, said procedure has been legal for nearly forty years, but in the realm of popular culture, it is still treated as taboo.  There are occasional exceptions on television (Everwood) and film (Coach Carter), but said medical procedure is still considered something that does not occur or is even discussed.  That a mainstream romantic drama from 1987 (that played primarily to relatively young girls and women) could contain a sympathetic character having an abortion (and not being judged for it) with little-to-no political or social blow back is a sign of how much we've regressed in the last twenty-five years.  Hell, in today's climate, a mainstream romantic drama being told from the point of view of a teenage girl is relatively rare (Miley Cyrus's The Last Song comes to mind... anything else other than the much-criticized Twilight Saga?).  In today's environment, the Dirty Dancing of yesteryear would have been criticized, if not protested and condemned.

The central abortion would have been a scarlet letter of death to the film in much of 'red state' America.  Johnny Castle would have been accused of being a pedophile, as his sexual fling with an underage Baby Houseman is a pretty clear-cut case of statutory rape.  The film would have been attacked for daring to present actual sexual yearnings (as opposed to chaste romantic longing) of its underage female protagonist, while the actual dirty dancing would have been accused of encouraging teenage promiscuity.  It will be interesting to see if any of this now-taboo material actually makes it into the alleged remake.  With Kenny Ortega at the directorial helm, I can only presume that Lionsgate wants something closer to his G-rated High School Musical films (which are just fine for what they are) than the actual older-teen audience that the original film targeted.

Good or bad, the original Dirty Dancing was a real movie, with an actual narrative that dealt with social issues in a more-or-less successful fashion.  It was not merely clothesline for which to hang a bunch of dance sequences.  It was a movie that earned its PG-13, back when that relatively-new rating actually meant something.  I can only hope that the remake, however misguided, is at least as morally thoughtful as its predecessor.