He is not your parent, your role model, or economic savior: It is not LeBron James's responsibility to save Cleveland, Ohio from economic collapse. 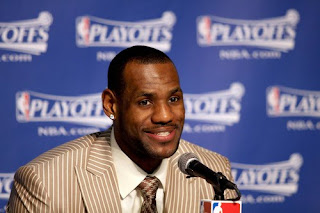 It is said that you should never make important decisions while you're upset, and it certainly holds that you shouldn't write rambling diatribes intended for a national audience well, ever, but certainly not when you're upset. But Cleveland Cavaliers owner Dan Gilbert did just that and came up the a priceless super villain rant. I can certainly sympathize, and LeBron arguably could have handled the situation with a little less pomp and circumstance. But the NBA is a business plain and simple. Countless winning coaches have been canned over the years just because they failed to acquire a Super Bowl ring, a World Series trophy, or an NBA Championship. And had James been injured over the course of his Cleveland career, he would have likely been cut just as quickly as he was drafted. This is no different, except this time the player is firing the team.

As is LeBron's right and privilege as a successful employee in his occupation of choice. He apparently did not go for the money, as Cleveland apparently offered him substantially larger paydays than the Miami Heat. LeBron chose the chance at championship glory and the chance to play with his friends and Olympic colleagues (Dwyane Wade and Chris Bosh). He didn't even pull a David Caruso, leaving his star-making team after just a year to pursue higher glory. He stayed on his home team for seven years and temporarily revived a city that was and still is on the brink of economic collapse. And, if I have anything important to say about this whole situation, it is this: It is not LeBron James's responsibility to maintain the economic fortunes of an entire city. If industries and businesses thrive purely because of the presence of a star basketball player, then maybe its time to question the priorities of said city that seemingly provides few alternatives to businesses connected to sporting events. LeBron James was not and is not the city of Cleveland, Ohio. His presence was merely a temporary band-aid on a gaping head wound.

100% agreed! The Twitter outrage was soooo freakin' hilarious. He's not the savior. He's just an athlete who wants to make choices for himself. Haha. People need to get over it.

100% agreed! The Twitter outrage was soooo freakin' hilarious. He's not the savior. He's just an athlete who wants to make choices for himself. Haha. People need to get over it.