Not Necessarily the News: Chris Nolan is not directing a James Bond film. 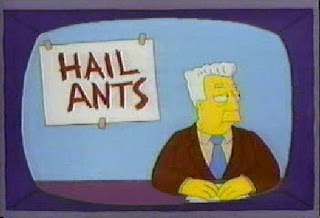 The internet is all aflutter today with various posts asking whether or not Chris Nolan will direct a James Bond film in the near-future. No. Heck, considering MGM's current financial woes, it may be a long time before we see anyone direct a new James Bond picture. All Chris Nolan has said is that he would like to make a 007 adventure and that Inception is partially inspired by Her Majesty's Secret Service. None of this is news. Nolan has expressed his admiration for the series many times over the last decade. Heck, in many ways, the last two-thirds of Batman Begins is a Caped Crusader picture filtered through the constructs of a James Bond template (Batman/Alfred/Lucius/Gordon/Rachel = Bond/M/Q/Leiter/Moneypenny). Point being, all Nolan said is that he'd like to theoretically direct a Bond film sometime down the road. So please stop foaming at the mouth and waiting for poor Sam Mendes to get fired.