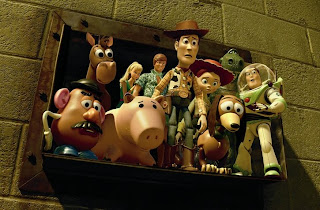 Wall-E also had a lower than 3x weekend multiplier ($23 million opening day, $63 million opening weekend). Most ominously, Wall-E also had the lowest weekend-to-final gross multiplier as well, ending up with $223 million domestic (still a rock-solid by any other standard 3.5 times its opening weekend). Still, the film did just pull in $109 million in three days. It beat out the previous Pixar best by 55%. And the fact that it was a heavily-anticipated sequel that opened in the middle of summer vacation is the likely cause for the apparent front-loading. But where it goes from here is an open question. Pixar films generally have legs. So even though the film will lose its IMAX screens to Twilight Saga: Eclipse on Wednesday the 30th, and it will lose many of its 3D screens to The Last Airbender the next day, the film is certainly good enough to be appreciated in whatever size or format it plays in for the rest of the summer. Even if it fails to reach the leggy-heights of Finding Nemo ($339 million/$70 million = 4.84x) or Ratatouille ($206 million/$48 million = 4.38x), we're still talking a strong contender for the year's highest-grossing film. Even if it hits a low-for-Pixar 3.09 multiplier, the picture still does $340 million. So no need to panic yet, the best film of 2010 still has a reasonable shot at becoming the highest-grossing film of 2010. Oh, and for a great look at the theoretically nihilistic themes of the movie, go here.

No such luck is in store for Jonah Hex, which grossed just $5.3 million in its debut weekend. It's the second-worst weekend of the year for a wide-release, behind the $4 million debut of MacGruber. This was clearly a case of Warner Bros giving up, not bothering to market the film that they knew was a disaster, and going for the tax write-off. The two theatrical trailers didn't bother to sell a tone or a hook of any kind. It sold the righteous-violence of Josh Brolin, the murderous-violence of John Malkovich, and the sex appeal of Megan Fox, then edited the picture to a PG-13 thus neutering all three would-be factors. This was clearly a picture that was hurt by last-minute screenings, as even embargoes could not prevent word from slipping out not only regarding the quality, but the fact that the film was just 73 minutes long without credits (they should have sent the picture out without press screenings). Also, Warner miscalculated, trying to make the film into counter-programming against Toy Story 3. But the toys of Pixar appealed to every single plausible demographic, thus there was no one that needed to be catered to. Quality and behind-the-scenes drama aside, Warner should have kept this one in the late-August release date that was originally planned. This one is a tragedy all-around.

In holdover news, The Karate Kid dropped 46% and The A-Team dropped about 43%, ending weekend two with $107 million and $50 million respectively. Both second-weekend drops are solid, but considering the competition against Toy Story 3, The Karate Kid's hold is slightly more impressive, while The A-Team will still struggle to make its money back. Get Him to the Greek ($47 million) is about $3 million ahead of Forgetting Sarah Marshall at this point in time. Shrek Forever After lost its IMAX and many of its 3D screens, and plunged 64%. Still, the sequel has amassed $223 million and should flirt with $240 million by the time it's done. In limited release news, the John C. Reilly/Katherine Keener/Jonah Hill/Marisa Tomei comedy Cyrus scored a massive $181,716 on just four screens, giving it the best limited-debut of the year, with $45,429 per screen. Winter's Bone added 35 screens and scored another $351,316 (about $9,000 per each of its 38 screens). During the last week or just this weekend, Iron Man 2 crossed $300 million, Robin Hood crossed $100 million, Sex and the City 2 crossed $90 million, and Prince of Persia: The Sands of Time crossed $80 million.

That's about all the news this weekend. The only wide release next Friday is the ensemble comedy (Adam Sandler, Chris Rock, David Spade, Kevin James, etc) Grown Ups. But this Wednesday comes the release of Knight and Day, the Tom Cruise/Cameron Diaz action-comedy that sneaked this weekend to 85% capacity crowds. So yes, Toy Story 3 will again be number one by a solid margin. For a look at what happened this weekend in 2008 and 2009, click accordingly. Go here for a listen to an interview I did with Culture Shock (Irish talk-radio) concerning the history of the modern blockbuster. Otherwise, take care and keep reading.