Skyfall director Sam Mendes will not be helming the next 007 adventure. Why Martin Campbell should return to the fold... 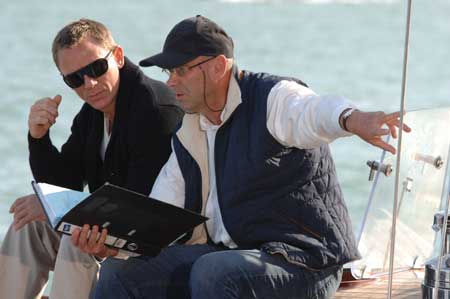 Okay, so Sam Mendes is officially out.  There was rumbling over the last few weeks that Sam Mendes would actual But as of today, Mendes politely bowed out of the running.  He will not return to helm the next James Bond picture following his phenomenally successful Skyfall.  I'm sure I will be but one of a million people offering their thoughts on who should helm the next 007 picture. It's tempting to once again half-jokingly offer up Terrance Malick, Warner Herzog, Sophia Coppola, and Michael Haneke as go-to picks.  But the choice is obvious.  The name is Campbell, Martin Campbell.  He directed two of the very best 007 pictures of the post-Connery era, if not outright ever (it's no secret where I stand on this... Goldfinger can suck it).  He revitalized the franchise twice with two different Bond actors in the last 18 years.  The stain of Green Lantern leaves him in a position of 'needing a hit', and there is no reason to presume he won't knock it out of the park for a third time.  But more importantly, doing the follow-up to Skyfall gives Campbell a new set of tools to play with in the 007 sandbox.  This time he'll just get to play with few restraints, without the burden of franchise rebirth.

Both GoldenEye and Casino Royale were reboots of sorts, the latter was quite literally a franchise reboot complete with an origin story, one that inexplicably continued for two more films no less.  Goldeneye was also a franchise restart, an attempt to position 007 as a relevant action star in a post-Cold War era dominated by John McClane, Batman, and Martin Riggs.  Casino Royale was a literal reboot as well as an attempt to reaffirm Bond's cinematic relevance in the shadow of Jason Bourne and comic book superheroes.  God willing, the next 007 film will just be 'another day in the life' of 007, just one grand adventure that Daniel Craig has to embark upon in order to save the queen and/or the world.  This is frankly new territory for Campbell, which I'd argue justifies him stepping behind the camera for the third time.  Free from the constraints of setting up a new world for 007, what could Martin Campbell do with just a straight-ahead action adventure starring the iconic character he obviously knows so well? I have no idea, but I'd love to find out.

So what say you? I'd frankly love to see what Spielberg, the one who made War of the Worlds and Munch, could bring to a series he has long wanted to helm. But barring that unlikely possibility, I vote for bringing Martin Campbell back to the franchise that he saved twice.  Because quite frankly nobody does it better.  So MGM/Sony should absolutely hire Martin Campbell to helm the next 007 adventure.  Unless, that is, they can get Chris Nolan.  Because Chris Nolan really really needs to get a genuine James Bond film out of his system.  I really don't want to see a Justice League movie fashioned as a Bond film...

I realize it sounds ridiculous, but I think Paul W.S. Anderson has a really fun, gadget-heavy Bond film in him. For all the faults with his movies, they're usually well put together, and he's got a pretty great sense of action (climax of Resident Evil 4 aside). It could be cool. Of course, he's busy elsewhere making mountains of money.

Then there's always Brad Bird, who already made a great Bond film that didn't even have Bond in it. He's also tied up in other things last I checked, but a man can dream.

Just give it to JJ Abrams. He needs to make 1 film in every franchise before he is done

How about Alfonso Cuaron? Prisoner of Azkaban and Children of Men were great.

I agree. Campbell should be No. 1 choice.

This was a joke for whomever voted this down.

Thou shall not use sarcasm in the presence of fans of any subject.