Zac Efron, Robert Pattinson, and Miley Cryus ARE genuine movie stars. Because true stardom is opening a movie with just your face on the poster. 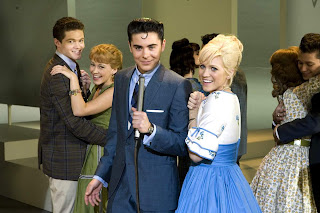 Brent Lang of The Wrap just doesn't get it. Plain and simple. In his provocatively-titled piece 'Zac Efron and the Incredible Shrinking Teen Idol Stars', Land submits that the newest generation of young stars (Zac Efron, Robert Pattinson, Miley Cyrus, etc) have disappointed at the box office even as the numbers he uses fail to bear that out. Once again, a pundit has fallen into the classic trap: Because a movie star's latest movie has failed to match up with his or her all-time best performances, said actor's star must be fading. But it fails to take into account two obvious factors: not every film an actor makes is identical in appeal and marketability, and a star cannot be expected to top their previous best every time out of the gate.

As I've said any number of occasions, movie stars are worth certain paydays for certain projects. Robert Downey Jr. is worth whatever he can get for a theoretical Iron Man 3, and he's worth almost as much for the upcoming Sherlock Holmes 2 (on that note, fan-favorite Jude Law can and should hold out for a career-high payday to return as Dr. Watson, as the sequel needs his chemistry with Downey Jr. to work again). But no one should expect The Soloist, a dark, sobering drama about homelessness and mental illness, to perform at the same levels as a crowd-pleasing franchise picture. Brendan Fraser knew that The Mummy Returns was his big payday back in 2001, so he asked for and got $12.5 million. And for that film and that franchise, he was worth every penny. But he certainly wasn't so foolhardy to ask for another $12.5 million for The Quiet American.

The absurd idea that a small intimate drama starring a given actor should be expected to perform as well as a crowd-pleasing genre picture is asinine. In fact, such expectations actually discourage actors from stretching or trying artier or more challenging works. Call it the Harrison Ford trap: all of Ford's fans constantly belittled Ford for not stretching his acting muscles and branching out. But every time he did (Random Hearts, Six Days Seven Nights, Hollywood Homicide), he faced the wrath of box office pundits who couldn't figure out why a romantic drama about two people whose cheating spouses died in a plane crash didn't perform quite as well as Air Force One. Eventually Ford caved in and went ahead and made Indiana Jones and the Kingdom of the Crystal Skull, where he was again lambasted (not entirely unfairly) for not living up to his prior work in his iconic role.

Point being, Charlie St. Cloud is not High School Musical 3, Hairspray, or even 17 Again. It is a dark drama about grieving and loss, and it had absolutely nothing going for it other than Zac Efron's name and face on the poster. Opening a well-marketed and appealing mainstream comedy like 17 Again to $23 million is impressive. Opening a poorly-marketed and not-terribly appealing drama like Charlie St. Cloud to $12.5 million all by yourself: You, Zac Efron, are a genuine movie star. Same goes for Robert Pattinson. Sure Remember Me 'only' made $55 million worldwide (on a budget of just $16 million), but that means that $55 million worth of tickets were sold completely on the shoulders of one Robert Pattinson (quick, raise your hands if you saw that one for Pierce Brosnan or Chris Cooper....?). And by all means, let's compare the box office performance of Kristen Stewart's The Runaways, an R-rated 70s rock biopic that never even got a wide release, with the box office run of New Moon.

Sure, Shia LeBeouf is a big star in theory, but does he really deserve much credit for the opening weekends of Transformers, Indiana Jones and the Kingdom of the Crystal Skull, or Transformers: Revenge of the Fallen (or the upcoming Wall Street: Money Never Sleeps)? Even his two other star vehicles, Disturbia and Eagle Eye, were mass-marketed all-audience thrillers that were backed by Steven Spielberg himself. While he obviously gets points for shrewd choices in selecting solid commercial projects (and all of the above projects, even Transformers 2, had legs, implying that they clicked with audiences past just opening weekend), let's see how well he can open a film that has absolutely nothing to offer except Shia LeBeouf. Star power, true star power, is about opening a film to a level to bring about eventual profitability with nothing but your pull on audiences.

While Angelina Jolie's Salt opened ($36 million) a touch below Tomb Raider ($47 million) and Wanted ($50 million), Salt's opening is just as, if not more impressive, because it relied purely on the draw of Angelina Jolie the action star. Again, this is a question of comfort zones. A Mighty Heart and The Changeling did not pull in blockbuster numbers, but Jolie is worth whatever she can get as an action heroine. Thus, quite obviously, Robert Pattinson shouldn't be getting paid nearly as much for Remember Me as he did for Twilight Saga: Eclipse. He didn't, so the film's box office should not be judged on the same level.

Pattinson and Efron could spend their entire careers doing rip-offs of, respectively Twilight and High School Musical. The fact that they are instead making more challenging pictures, and still posting decent returns, means that they are absolutely bankable names on a reasonable budget. Miley Cryus could spend her whole career making Hanna Montana sequels, but she chooses not to. And to say that the $88 million worldwide gross of The Last Song (on a budget of $20 million) is a disappointment compared to the $155 million gross of The Hanna Montana Movie is no different than saying that Inception is a flop because it won't gross two-thirds of what The Dark Knight pulled in. Both Chris Nolan pictures cost around $180 million, yet one will only make around $700 million worldwide while the Batman sequel grossed a billion. So obviously Inception is a stinker and Nolan should be laughed out of town, right?

Stardom is relative and somewhat flexible. Put Johnny Depp in a Pirates of the Caribbean sequel or a big-budget Tim Burton fantasy, and he's worth $30 million plus points. But he shouldn't be getting, nor will he be asking for, the same cut for a theoretical Terry Gilliam picture, and thus said Gilliam picture should not be judged on the same scale as Pirates of the Caribbean: On Stranger Tides. Depp didn't become a star when Pirates of the Caribbean: Curse of the Black Pearl opened to $43 million in July 2003. Depp became a star when The Secret Window, a thriller than basically starred Depp all-by-himself in an old cabin, opened to $17 million in the Spring of 2004. Will Smith isn't a star because Men in Black 2 opened to $52 million back in July 2002. He's a star, arguably the biggest one around, because he can open Seven Pounds to $14 million in the middle of a crowded pre-Christmas weekend. And speaking of the Smith family, don't be that idiot who screams failure when Jaden Smith's next movie doesn't equal or top the $56 million opening weekend of The Karate Kid.

Star power isn't opening something that is already highly appealing to a mass audience that has the benefit of your name on the poster. Star power is scoring a reasonable or better opening weekend for a film that has nothing to offer except your name on the poster. On that scale, Miley Cyrus, Zac Efron, and Robert Pattinson are genuine movie stars.

God, finally a sensible article about this topic! I think there's a lot o bitter people out there that just resents those Young Actors, because they are pretty and get lots of money.

Wow! I am usually not at a loss for words but your article couldn't have expresses truthfulness any better. Thank you for a truly unbiased view. Well done! You have yourself a new reader.

Agreed. In relation, aside from the worlds' best critic's site :) , the headlines after SALT's opening weekend weren't about a good and solid opening, they were all along the lines of "Angelina fails to top INCEPTION" making a good opening weekend sound as a failure.

PS) Making money back, or scoring even IS a success, no matter what.

Thank you for post ! Robert Pattinson is one of my favorite actor. He was born on May 13, 1986 in London, England. He enjoys music and is an excellent musician, playing both the guitar and piano.

Thank you for post ! Robert Pattinson is one of my favorite actor. He was born on May 13, 1986 in London, England. He enjoys music and is an excellent musician, playing both the guitar and piano.