Review: Ghosts of Girlfriends Past (2009) 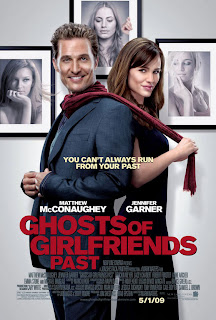 Ghosts of Girlfriends Past is a relatively okay movie, even while at its core it's pretty unremarkable. It is well acted and stylishly shot, with a brisk pace that only lags just a bit in the middle act. But it is at heart a simplistic story that purports that most people who make the choice to not have a conventional life (marriage, kids, two-car garage) are motivated not by personal choice but by deep-seated emotional scars. That may be the case for some, but couldn't we at least once have a film about a confirmed bachelor who gets to remain a bachelor by the film's climax, even if he has to become a somewhat better person?

The plot, in brief - Conner Meed (Matthew McConaughy) is a big-time fashion photographer and a full-time lothario. With a somewhat cartoonish love-em and leave-em philosophy, he embarks to his brother's wedding not with joy but merely family obligation. After arriving and making an ass out of himself in front of his family, the bride's family, and his childhood sweetheart (Jennifer Garner), he is visited by the ghost of his uncle (Michael Douglas) who advises him that he must change his promiscuous ways or risk being alone forever. What follows is a textbook variation on Charles Dickens's A Christmas Carol, as Conner is visited by three ghosts representing relationships past, present, and future. As expected, childhood trauma is revealed, secret motivations and fears are uncovered, and Conner realizes that he is controlled not by his libido but by his fears.

On the surface level, the film more or less works. Everyone in the cast is game and the film looks lovely. What's most impressive is the fact that the women in the film are actually allowed to be funny. As Dr. Jenny Perotti, Jennifer Garner is not just 'the childhood sweetheart who Conner pushed away', but a completely charming and humorous character of her own accord. In fact, it is a flaw of the film that she seems too smart and world-weary to still have feelings for the dope who cruelly left her, and her exceptional chemistry with another bachelor at the wedding (Daniel Sunjata) doesn't help the movie's grand schemes. Lacey Chambert's blushing bride is relatively amusing, with the amount of Bridezilla moments kept to a bare and reasonable minimum. In what could have been a stock role, Noureen DeWolf gives Conner's thankless secretary a sharp personality and a no-bullshit demeanor (it helps that she's arguably the only woman in the film not drawn to the cad). Emma Stone gets laughs as the 'past-tense ghost', the sixteen-year old nerd who was Conner's first conquest. Best of all is Anne Archer as the mother of the bride, who gets one of the film's best scenes during a warm flirtation moment with McConaughy. Unlike many comedies, the women actually get just as many funny lines and just as much personality as the men.

Also helping things is the low-key nature of the plot. With the exception of one painfully contrived scene involving a wedding cake, the film avoids over-the-top set pieces and pratfalls. Even the climax of the film refuses to take place at an interrupted wedding or an airport, but in a location irrelevant to the situation at hand. And said climax involves not a public confessional but a quiet conversation that is witnessed by only a few others. Furthermore, the relationship between Conner and his brother (Breckin Myer) is surprisingly thought-out, and a moment of Paul defending his older brother is the emotional highlight of the film. The supporting cast, from Robert Forster to Michael Douglas, seem to be trying their best to make this a real movie. And they pretty much succeed despite the formulaic narrative at play. It helps to have a real director, and Mark Waters (he of Mean Girls, the best movie ever made about high school girls) once again elicits terrific performances to help somewhat redeem a stock romantic comedy (re - Just Like Heaven).

But in the end, it is just another story about a ladies-man learning that having tons of consensual sex with willing partners is a huge character flaw and a sign of darker personal demons. We're once again told that women aren't smart enough to know when they are just rolling in the hay with an obvious playboy, thus Conner is responsible for countless heartbreaks and tears. And once again we're led to believe that a guy would have been happy forever more if he had just married his preschool sweetheart right from the get-go (sure plenty of happy couples met that early, but must that be the finale to so many romantic comedies?). It's something that's long bugged me about romantic comedies, but at least this is a relatively entertaining variation on that old hat moral.

Ghosts of Girlfriends Past is a surprisingly entertaining presentation of a sour package. But if you know what you're getting into, it's funny and well-acted, with equal laughs for the actors and actresses both. While I wish that McConaughy would do more varied work in the vein of Frailty, Sahara, and Lone Star, but this is a fine romantic comedy and is certainly a step up from Fool's Gold.