Is Obssessed sexist and racist? Once again, a genre film targeting minorities is deemed offensive for said minority group... 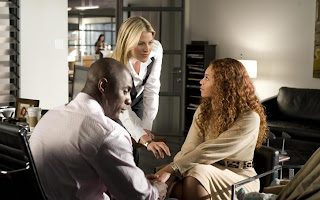 I was reluctant to get into this because I haven't seen Obsessed (which, as I correctly predicted, is going to do nearly $30 million this weekend), but the wolves are already out in force at Hollywood Elsewhere, Deadline Hollywood, and elsewhere.

Whenever any genre film comes out that doesn't revolve around white geeks or white action heroes, everyone gets up in arms about how the film is somehow racist/sexist/bad for the specific demographic that it's targeting. White men and overgrown boys can have their trashy exploitation jollies as much as they want. But as soon as women or a minority group is given their own somewhat trashy entertainment, it's suddenly a problem for culture at large.

For what it's worth, I've been told that the issue of race is never actually discussed in the film, so it very well may be an example of colorblind storytelling. Of course, regardless of what's discussed in the film, I think we can presume that any film that has the working title of 'Oh No She Didn't' probably has a specific racial audience in mind (unless that catchphrase has itself transcended race, but I digress).

But let's presume that the film has racial politics on its mind. Is Obsessed a thriller that specifically exploits genuine resentment that some African American women feel when some of the more suitable black bachelors end up with white women? Quite possibly. That's why they are called 'exploitation films'. Would it be better if the film didn't have any particular social issue at its core? Maybe it would be less 'offensive', but it would also be an empty, hollow film that had nothing going on underneath the thriller mechanics. Regardless of whether it's a good film, shouldn't we be pleased that this mainstream thriller is actually about something?

I wrote about this at length when Sex and the City came out and pundits and critics were declaring that the film was somehow a 'Taliban recruitment film'. or 'the equivalent of the OJ Simpson verdict for women'. So it's OK for men in indulge in power fantasies like Iron Man, but Sex and the City is bad for women and Obsessed is bad for black women? Obsessed could very well be a piece of garbage. But it shouldn't be deemed smellier than the norm purely because it's aimed at African Americans. Real racial/sexual progress will come in Hollywood once other demographics are allowed to enjoy their own trash and exploitation genre pictures in peace without being scolded by moralists both within and outside said culture.