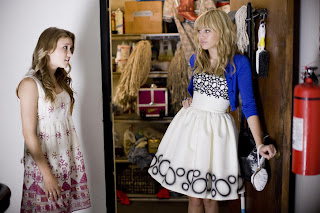 Several months ago, I somewhat expected The Hannah Montana Movie to open to about $60 million. Alas, since the "mere" $42 million opening for High School Musical 3 and the downright disappointing $12 million opening for The Jonas Brothers 3D Concert Experience, expectations were around $40 million. Disney amazingly got away with claiming that it only expected a $17 million opening weekend (which is what The Lizzie Maguire Movie opened to in May, 2003). And, while I initially doubted Disney's decision to move this pic away from the May 1st summer kick off slot, I now realize why they did it. Having the film open on Good Friday was a brilliant way to both boost opening day numbers and provide a cover when the box office dropped like a stone on Saturday and Sunday. "It's not insanely front loaded with little cross over appeal, it was just Easter weekend!"

The Hannah Montana Movie officially grossed $32.3 million over the weekend, which includes a whopping $17.4 million Friday. So, yes, the opening day-to-weekend multiplier is a stunningly low 1.85x. That's easily the lowest that can ever remember for a major release, besting the 1.9x multiplier for Twilight last November. It actually fell to second place on Saturday behind Fast & Furious, and down to third place by Sunday behind Fast & Furious and Monsters Vs. Aliens. Still, the massive opening day was just enough to clinch the number one spot. To be fair, Twilight actually ended up displaying minor legs, stretching a $69 million opening weekend into a $192 million final domestic total. I do not expect any such legs for Hannah Montana as there is really no reason for people outside the fan base to check this one out. Still, the movie probably cost about $15 million and, even if it completely collapses, it will make at least $75 million by the end. We'll know the story by this weekend when it faces off against Zac Efron's 17 Again.

Also opening was Observe and Report, which is quickly turning into 'Seth Rogen's date rape movie'. Alas, moviegoers seemed to be completely unable to realize that the film's dark, brooding and satirical trailer was in fact advertising a dark, brooding, satirical comedy. It opened to $4.7 million and plunged to $3.8 million on Saturday and $2.4 million on Sunday. That makes an $11 million opening weekend and a terrible 2.3x multiplier. Considering this was a sequel or a genre picture that had any rush appeal, this can only mean that word out mouth was lousy. Alas, this nearly brilliant little gem won't make it to $30 million.

Elsewhere, Fast & Furious plunged an expected 61% to $27 million. The ten day total is a solid $116 million. The third Friday of Monsters Vs. Aliens actually surpassed its second Friday numbers before settling in for a pretty solid 33% drop. The weekend take was $22 million and the new total is $140 million. It will be close, but I doubt that either of these films will make it to $200 million. For the record, I finally saw Monsters Vs. Aliens in IMAX 3D. The visuals are amazing and the sheer scope and size of the film is breathtaking. It sincerely makes me wish that Dreamworks had the courage to make a serious science-fiction adventure film instead of a jokey, sci-fi comedy. I've said this before, but have we reached the point where a film that actually has to open to $80 million to safely reach $200 million total gross? Madagascar 2, Quantum Of Solace, Twilight, and Fast & Furious - We've had literally four major films, all relatively well liked by the audiences that they were aimed at, that have opened to between $63 million and $72 million since November, and not one of them did or will reach $200 million (Twilight came the closest).

Not much else to report on the front. Next weekend will have the shockingly well-reviewed 17 Again facing off against the pleasantly well reviewed State Of Play and the not reviewed at all Crank 2: High Voltage.

It's such a crime (but hardly unsurprising) that O&R bombed theatrically. Ballsiest and funniest movie in YEARS.