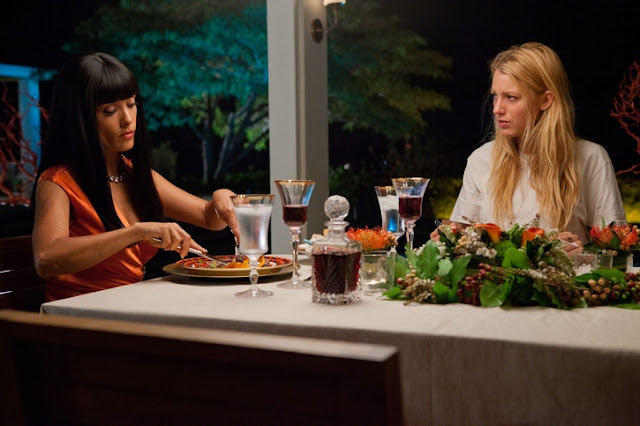 I've already allotted five paragraphs to The Amazing Spider-Man, so it's time to discuss the other films.  There were two other wide openers this weekend.  Oliver Stone's Savages debuted on Friday of the holiday weekend, proving to be relatively successful counter-programming.  The $45 million hard-R drug thriller earned $16.2 million.  Considering most of the stars (Blake Lively, Salma Hayek, Taylor Kitsch, Aaron Johnson, and Benicio Del Toro) are not box office draws, the director was the main attraction here.  While supporting player John Travolta probably helped a bit, this was Oliver Stone's unofficial return to gritty, adult-skewing genre fare.  World Trade Center, W., and Wall Street: Money Never Sleeps were exactly kids flicks, but the unapologetic auteur behind Platoon, JFK, and Natural Born Killers hadn't been seen since Any Given Sunday back in 1999 .  As such, it stands as the third-biggest debut of his career, behind World Trade Center ($18 million) and Wall Street: Money Never Sleeps ($19 million).  With a C+ from Cinemascore (it's arguably worse than that, sadly, highlighting boring youngsters over entertaining grownups while being a good 50% longer than it should be), it won't be reaching the heights of Platoon ($138 million) or the $70-$75 million range of Any Given Sunday, JFK, World Trade Center, and Born on the Fourth of July.  Coming anywhere near the $50 million mark (Natural Born Killers) will count as a win for Universal, which probably should have moved this one to July 13th after they moved the unexpectedly successful Ted to June 29th.

The other wide debut was the 3D concert documentary Katy Perry: Part of Me.  The $12 million Paramount production earned $7.1 million over the Fri-Sun portion of the weekend and $10.2 million since debuting on Thursday.  The analysis on this one is simple.  It's performing like Jonas Brothers: The 3D Concert Experience ($12 million debut/$19 million total) and Glee: The 3D Concert Movie ($5 million debut/$11 million total) as opposed to Michael Jackson: This is It! ($32 million 5-day debut, $72 million total), Justin Bieber: Never Say Never ($29 million debut, $72 million total), and Hannah Montana/Miley Cyrus: Best of Both Worlds ($31 million debut/$65 million total).  Katy Perry's documentary effort is earning strong reviews and an A from Cinemascore, so it may end up with a token amount of legs.  Best bet is that it will end up between $20 million and $25 million.  The film played 81% female and 72% under 25, so it was probably a great place to pick up a date in a certain age range (or depending on how old you are, get arrested).  In holdover news, Ted dropped just 40% for a $32.5 million second weekend.  Fueled by the holiday as well as strong word of mouth, the terrific comedy now has $120 million after ten days.  So far, it's tracking ahead of The Hangover ($32 million second weekend, $104 million after ten days), but it's too early for those kind of comparisons quite yet.  Pixar's Brave held firm in weekend three, earning $20 million and ended weekend three with $174 million.  Among Pixar titles, that's the fifth-best 17 day total, behind only Finding Nemo ($191 million), The Incredibles ($177 million), Up ($187 million), and Toy Story 3 ($289 million).  It will face its next test on July 13th, when Ice Age: Continental Drift (which has already racked up $198 million overseas) debuts in America.

Magic Mike dropped a hearty 60% over the holiday frame, for a $15.6 million second weekend.  But Steven Soderbergh's $7 million male-stripper drama has already grossed $72 million, meaning it will outgross Contagion ($75 million) in a couple days and become Soderbergh's sixth-biggest grosser.  Madea's Witness Protection used the holiday as somewhat blunt the usual quick-kill nature of Tyler Perry's films.  It still dropped from $26 million to $10 million, but the summer weekdays helped give it a ten-day total of $46 million.  There is an outside chance that it could surpass $63 million to become Perry;'s second biggest grosser ever, behind Madea Goes to Jail ($90 million).  Madagascar 3 is still hanging in there, having now come within a nose of the original film's $197 million domestic gross.  Worldwide, it's racing towards $475 million.  Speaking of worldwide, Snow White and the Huntsman ($148 million domestic) has crossed $350 million worldwide.  Prometheus now has over $300 million worldwide.  Finally, despite my earlier concerns, Focus Features' expansion of The Moonrise Kingdom worked like a charm (I was wrong...) as the film crossed $26 million to become Wes Anderson's second-biggest grosser ever.  Woody Allen's From Rome With Love expanded over the holiday, earning $3.5 million for a $5.2 million total.  Two worthwhile indies, Safety Not Guaranteed and Bernie (both worth seeing) are still chugging, with $2 million and $7 million respectively.  And finally Beasts of the Southern Wild expanded to 19 screens and earned $19,789 per each theater.  The near-masterpiece sits with $745,000 thus far.

That's it for this weekend.  The sole wide release next weekend is Ice Age 4: Continental Drift, as most of the geek crowd will be at Comic Con and/or breathlessly anticipating The Dark Knight Rises.  Until then, take care.

I kind of liked Savages...Although, Salma Hayek, Benicio Del Toro, Demian Bichir, and John Travolta were just so much more entertaining and better than the white bread trio. Also, Snow White and the Huntsman crossed $350 million, not $250 million, worldwide. Which is interesting, considering how many people thought it would flop.

I have just downloaded iStripper, and now I can watch the sexiest virtual strippers on my taskbar.