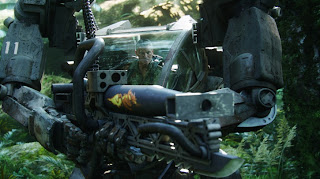 Avatar won the box office derby for the seventh straight weekend, taking the record for the biggest seventh weekend gross ($30 million) from Titanic ($25 million). Dropping just 14%, the unstoppable monster has now grossed $594 million, meaning it will cross Titanic's $600 million gross in the next 2-3 days, perhaps on the very day (Tuesday the 2nd) that the Oscar nominations are announced. Early last week, it surpassed Titanic's worldwide box office gross to become the world's highest-grossing movie. This weekend it crossed the seemingly unfathomable $2 billion mark worldwide. You can babble all you want about inflation, 3D and IMAX ticket prices, and what have you to your hearts' content, but check out this little statistic: When Avatar reaches $2.239 billion, which it will in the next two or three weeks, it will have doubled the worldwide take of every other movie ever made except Titanic. It will also soon have an over $1 billion lead over any movie not directed by James Cameron. There's not much more to say at this point than 'wow' and don't make a sequel, so let's move on...

Second place went to the Mel Gibson comeback vehicle Edge of Darkness. The Martin Campbell suspense thriller (remade from the director's own 1985 BBC miniseries) pulled in $17 million. All eyes were focused on this one, as it was Gibson's first starring role since 2002's Signs. The opening isn't terrific but it's not terrible either. The film was advertised as a variation on Taken, but anyone paying attention to the preview could tell that it was more of a procedural investigation drama than a slam-bang thriller. The opening is right in line with Martin Campbell's non-blockbuster debuts, just above the $16.3 million opening for 2005's The Legend of Zorro and the $15.5 million debut of 2000's Vertical Limit. Considering this picture cost $80 million (or about what the other two Campbell films cost), I'm sure Warner is hoping for something closer to Vertical Limit's $69 million finish as opposed to The Legend of Zorro's $46 million end total. Pardon the pun, but this was neither his brightest day nor his blackest night.

For Gibson, this is his lowest opening since Braveheart back in May 1995, and it's actually a bit under the $17.4 million debut of Maverick back in May 1994. Of course, opening weekends have changed quite a bit even since Gibson semi-retired from acting back in 2002, and of course he's had some major PR problems in the last eight years. On the plus side, the film had a solid 3x multiplier, so solid word of mouth is likely. 70% of the audience came out for Gibson, meaning he still has a fan-base even when a film depends purely on him to sell it. The poster and trailer were flat at best, and, to be honest, I would have had absolutely no interest in this one if not for my love of all things Martin Campbell. We'll see how Gibson fares with a project that has more to offer than just his star power.

Third place went to When in Rome, which pulled in $12 million. While the number isn't spectacular, it's actually a pretty solid opening for the two very untested leads, Kristen Bell and Josh Duhmel (let's be honest, you probably never watched Veronica Mars). Considering how awful the marketing was for this one, Bell and Duhamel should get quite a bit of credit for this thing opening at all. After all, this apparent stinker easily topped the $9 million of Leap Year, which starred critical darling and Enchanted star Amy Adams. Kristen Bell is no Katherine Heigl, but this is a solid first step if she wants to climb higher in the rom-com genre. Fourth place went to The Tooth Fairy, which dipped just 28% for a $10 million second-weekend and a $26 million ten-day total. Not much more to say, but the film should reach its $48 million budget before home video. The Book of Eli dropped 44%, and its new total is just $6 million short of its $80 million budget. $100 million will be a struggle, but the Denzel Washington/Gary Oldman post-apocalyptic drama could still squeak in there.

Legion plunged 61% in its second weekend, but it has already exceeded its $26 million budget so no harm, no foul. Peter Jackson's The Lovely Bones dropped another 43%, pulling in $4.7 million in its third weekend of wide release. Its new total is $38 million and Paramount can only hope for a slight uptick next weekend on account of Stanley Tucci's likely Oscar nomination. Sherlock Holmes still ended up $3 million short of the $200 million mark. Warner must be pretty sure that it'll get there, as they are advertising the film as a $200 million domestic grosser in the DVD/Blu Ray press release that went out this week. As of now, the domestic total is $197 million and the international numbers rest at $394 million. Also, for those who care, Joe Silver and Warner Bros are fast tracking a sequel to this one, having basically pulled director Guy Ritchie off of Lobo in order to get him back to work in the dark alleys of Victorian London. I suppose the only question is what big star gets to play Holmes's arch-nemesis. Oh, and pundits/critics, let's lay off the gay panic this time around OK?

Alvin and the Chipmunks is now at $209 million, which puts it in striking distance of the original's $217 million US total. It's Complicated passed the $100 million mark over the last week and now sits at $104 million. The Princess and the Frog finally crossed $100 million just today, so a firm mazel tov to Disney. Crazy Heart pulled in another $2.2 million in its last weekend of limited release, and its total is now $6.5 million. Ironically, while next weekend will coincide with the Jeff Bridges's Oscar nomination, it will also put the country music/heartland drama smack dab into Super Bowl weekend.  That may prove to be an issue for troubled Bad Blake's national debut, although Fox Searchlight would certainly do well to buy a national ad spot or two during the game. The Young Victoria has quietly approached the $8 million mark, so its prospects should only brighten if Emily Blunt pulls of a somewhat unexpected Best Actress nomination on Tuesday. Nearly surefire nominee A Single Man (Colin Firth) is at $5 million and fellow sure-thing An Education (Carey Mulligan) is at $8.8 million.

Up in the Air lost 277 screens and 30%, but its total now sits at $73 million. With the expected nominations in nearly every major category, the George Clooney vehicle could very well reach $100 million, especially if it wins one or two major awards. As for Best Director front-runner Kathryn Bigelow, you can rent The Hurt Locker on DVD and Blu Ray. We can all blame Summit Entertainment's non-existent marketing campaign and inability to mount a wide release for what should have been a mainstream pulse-racer over the summer, and to be fair I never wrote a full review of the picture. But it's for sale at every major store and available to rent at every major video store. No more excuses, go rent The Hurt Locker (and rent the equally under-seen Whip It while you're at it).

That's the major news for this weekend. Next weekend sees the wide release of the John Travolta action comedy From Paris With Love (directed by Pierre Morel the helmer of District 13 and Taken), as well as the Amanda Seyfried/Channing Tatum romantic drama Dear John. There are ten films opening in limited release, including the sequel to District 13, so expect a lot of puny totals and a few mighty per-screen averages.