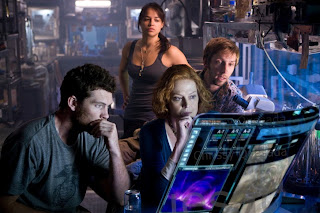 Avatar grossed $68.4 million in its third weekend, dropping a whopping 9% from its previous weekend. It's the biggest third-weekend of all time, clobbering Spider-Man's $45 million third-weekend gross. If this were Avatar's second weekend, it would be the fifth-biggest second weekend of all time. If this were Avatar's opening weekend, it would be the forty-third biggest opening weekend of all time (and it would likely remain 2010's top opening until May). On its own, it's the biggest weekend in January history, clobbering the $40 million Fri-Sun take of Cloverfield. In just 17 days, the James Cameron sci-fi epic has amassed $352 million in the US alone. Only The Dark Knight crossed that mark faster, in just fourteen days. Global numbers, well that's another story. There are now five movies that have amassed over $1 billion in worldwide ticket sales. The previous speed record-holder, Pirates of the Caribbean: Dead Man's Chest, did it in about two months. The Dark Knight took several months and a re-release timed to coincide with Oscar nominations that never happened. Avatar just crossed that threshold in nineteen days. In just two-and-a-half weeks, Avatar is the fourth-highest grossing film of all time worldwide. Pathetic.

By next week at the latest, Avatar will have soared past the $400 million mark in domestic grosses, while surpassing the $1.1 billion earned by Lord of the Rings: Return of the King worldwide. Barring complete collapse after the holiday season, Avatar has a solid shot of surpassing the $533 million domestic total of The Dark Knight. This January looks solid but unimposing on paper, unlike last year's anomaly of massive January releases (Paul Blart: Mall Cop, Gran Torino, Taken. But whether or not Avatar can surpass Titanic's $600 million domestic gross (possible with Oscar nominations and wins in major categories) or $1.8 billion global take (still a huge unknown), James Cameron will soon have the first and second highest-grossing movies of all time (as well as the highest-grossing films from each of the last two decades). Just last February, I called the worldwide Titanic gross the 'Joe DiMaggio 56-game hitting streak' of movie box office records. The fact that we are even discussing its possible downfall, from the same director no less, is astonishing.

Once again, the three big Christmas releases are rendered invisible by the astounding performance of Avatar. Remember just a few weeks ago, when we were all worried that Avatar would be another King Kong? Remember when we all assumed that the opening weekend of Avatar (an unknown property) would at best equal the opening weekend of Sherlock Holmes? This is one of the reasons I don't do as much box office prediction. While my batting average is pretty high overall, I've noticed that some of my sharpest, most thoroughly-researched, and well-written essays have been in support of predictions that were dead wrong. Anyway, Sherlock Holmes is doing fine enough for itself. If Avatar is Titanic, then Sherlock Holmes is Tomorrow Never Dies. Although mediocre word of mouth likely led to a large (for this weekend) second-weekend drop of 41%, the picture grossed $36.6 million this weekend and has already amassed $138 million in ten days. $175 million is now more or less a sure thing, but $200 million may be out of reach for the would-be franchise. However, since Warner Bros was able to keep this thing under $100 million, it should be a solid long-term profit. Any sequel to this not-terribly beloved original will have to risk falling into the 'Tomb Raider trap'. If the studio can keep costs under control for the next installment, they should have no problem with a sequel, especially if rumors about a certain major star playing a certain major villain turn out to be true.

Alvin and the Chipmunks: The Squeakquel continued to embarrass our fair nation by pulling in another $35.1 million. Dropping a not unreasonable 28%, the 'secret weapon against Avatar flopping' (ha!) continues to murder The Princess and the Frog and has now amassed $157 million. On the plus side, said beleaguered Disney cartoon actually rose 9% this weekend, bringing its total to a decent $84 million. C'mon gang, let's get this sucker to $100 million (I'll likely take our daughter next weekend for my second viewing and her first). It's Complicated dropped 15% in weekend two, grossing $18.8 million and ending day ten with $59 million. The difference between $80 million and $100 million will likely depend on any awards traction that it can muster (Alec Baldwin is getting major 'Best Supporting Actor' heat). The Blind Side continues to astonish. It rose 3%, grossing $11.8 million and crossing the $200 million mark on Friday. It's the ninth film to gross over $10 million in its seventh weekend, and the third-largest seventh weekend in history. If you don't count The Passion of the Christ (since its 'truthiness' is a matter of debate), then The Blind Side is the highest-grossing 'based on a true story' film of all-time. It now stands at $209 million and an all-but inevitable Best Actress Academy Award nomination for Sandra Bullock can only extend this shocking success story.

In Oscar-bait news, presumptive front-runner Up in the Air packed in another $10.7 million, and the $25 million character drama now stands at $44 million, or just under what Michael Clayton and Syriana finished with ($49 million and $50 million respectively). With the awards derby still to come, Up in the Air will surely become George Clooney's highest-grossing star vehicle (ie - no all-star heists, no giant waves, and no Batman). Rob Marshall's Nine ended up in ninth place in its second weekend. The pretty awful musical dropped 29%, leaving the critically trashed $80-million musical with a $3.9 million second weekend and a $13.7 million total. Amazingly, despite audience disinterest and critical flogging, there is still a chance that this one could sneak into the expanded Best Picture category based purely on its pedigree, the desire to honor the late Anthony Minghella, and the appeal of having the film's stars in attendance at the Oscar telecast. Invictus crossed the $30 million mark and will need major awards traction to get much farther than $40 million. Precious crossed the $40 million mark on New Years Eve and now sits at $43 million. Whatever it makes after this is all about Oscar nominations (and a possible Best Supporting Actress win for Mo'Nique).

Finally, a bit about the rest of the field. The only opener was the 3-screen release of Michael Haneke's The White Ribbon, an allegedly quite-scary horror film that grossed $61,300 (it won the Palme d'Or at Cannes). Congratulations are in order for The Twilight Saga: New Moon. With $287 million, it has now finally doubled its $142 million opening weekend gross. To be fair, it is not the first $100 million+ opener to fail to cross $300 million, as Harry Potter and the Goblet of Fire and X-Men: The Last Stand opened with $102 million yet petered out at $290 million and $234 million respectively. Like the Harry Potter franchise, it seems that Twilight is a series that has its fanbase set in, with no real need to attract newbies.

And that's all the news that's fit to print. Join us next weekend when Avatar goes up against Amy Adams and Matthew Good in Leap Year, as well as the allegedly terrific vampire drama Daybreakers, and Michael Cera's Youth In Revolt. In limited release, we have Bitch Slap, Matthew Broderick's Wonderful World, and the seemingly autobiographical Tim Allen vehicle, Crazy on the Outside. For box office, reviews, ongoing year-end wrap-ups and decade wrap-ups, and more, go to Mendelson's Memos.