Avatar's box office - it's not about what, but about how. 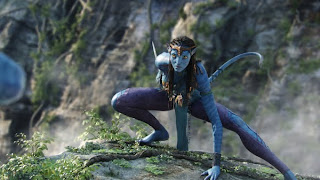 Much of the discussion of Avatar's record-run has focused on the 'asterisk factor'. In that, no matter how much Avatar has made right now, it doesn't really count as impressive because A) inflation means older hit films have sold more tickets and B) the 3D and IMAX ticket-price bump negates the record-setting nature of the numbers. But those who carp at this point are missing two very important factors. Avatar is showing consistency unlike any event film in recent memory, and it's not even close to finished.

As of today, James Cameron's Avatar has grossed $461 million in the US, placing it third on the all-time grosser list (with a $10.4 million fifth Friday, it actually finished second on Friday to The Book of Eli's $11.7 million opening day). It is about to cross $500 million in 32 days (The Dark Knight took 45 days) and it will likely surpass The Dark Knight's $533 million take by next week. Barring unforeseen collapse, it will cross Titanic's all-time high of $600 million by the end of the month or very early February. It has done that with an opening weekend just $10 million larger than The Dark Knight's first day and about $5 million larger than New Moon's. It has not had a single day over $28 million in that time. Sure, if the movie had opened to $100 million+, dropped by 50-60% in weekend two, and then petered out in six weeks, then we could say that it was just a normal blockbuster with a 3D 'bump'. But Avatar opened with $77 million, made another $75 million in its second weekend, and then stayed above $50 million until just this very weekend, its fifth, where it will have to settle for a $42 million fifthweekend.

But Avatar's success is about the day-to-day constancy of its large numbers. Sure, there are some 1980s blockbusters (ET, Ghostbusters, Beverly Hills Cop) that played week in and week out for several months, but in modern times Titanic is the only thing that comes close. Heck, even adjusted for inflation, Avatar will soon surpass the totals of Beverly Hills Cop ($490 million adjusted) and Ghostbusters ($500 million adjusted). If Avatar makes it to $700 million, it will be number 13 on the all-time 'adjusted for inflation' domestic grosser list. As for global sales, it will be at or near $1.5 billion by Monday, and the film could easily crack $2 billion at the rate it's going. And that's the other point. What people are forgetting is that Avatar isn't close to being finished. In its fifth weekend, it's still dropping by under 30% and pulling in weekend numbers that most films would kill for in their opening Fri-Sun. We honestly have no idea where the film will finish, so the final number may be so obscenely large that it will cancel out any 'asterisk' issues concerning inflation or the 3D/IMAX price factor.

Point being, with sell-outs still being reported left and right (my sister-in-law has been sold out at the local IMAX three times running), and the awards race yet to factor in, Avatar may just be getting started. Let's see where the movie stops before we discuss asterisks and mitigating factors.

Posted by Scott Mendelson at 2:16 PM

i'm with you Scott. I'm sick of every moron rushing to be the first to post "yeah but it's not close adjusted for inflation" on every singlle post or article about avatars box office. avatar may still be more impressive when you consider it in relation to overall movie attendance and the general moviegoing climate of today