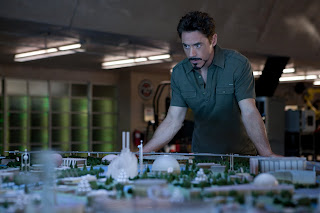 To the surprise of six, possibly seven people, IMAX finally confirmed that Jon Favreau's Iron Man sequel will be debuting on May 7th in both regular 35mm and IMAX formats. This had been discussed as far back as September, 2008, but countless bookings (Twilight Saga: Eclipse, Inception, Tron 2.0, etc) were set in stone while the fate of Tony Stark's IMAX debut was an open question. I can only presume that Iron Man 2 will have an abbreviated two-week IMAX run before being replaced by Shrek: Happily Forever After (opening May 21st). Of course, since Shrek 4 and Iron Man 2 are both Paramount releases, we'll see if there is any kind of split tickets. Don't be surprised to see Iron Man 2: The IMAX Experience held over for late-night showings after the opening weekend of Shrek 4.

What is worth noting is that we now have all five of the top summer contenders debuting in some kind of 'special' theaters. Iron Man 2, Shrek 4, Eclipse, and Chris Nolan's Inception are all debuting in IMAX. Disney/Pixar's Toy Story 3 will of course premiere in Disney Digital 3D (which means that Avatar's $77 million record-3D opening is toast come June 18th). The two other closest competitors, Little Fockers and Sex and the City 2, will have to console themselves with old-fashioned 35mm debuts. This also means is that we have a legitimate 3-way race to take down The Dark Knight's $158.4 million opening weekend record, with Iron Man 2 and Twilight Saga: Eclipse leading the pack and Toy Story 3 acting as possible spoiler. Regardless of openings, Toy Story 3 is the front-runner to win the whole summer box office derby at this point (mega-opening + Pixar legs = likely champion).

As far as what IMAX plans to do with the giant hole left by what was once Spider-Man 4, the problem presents itself with a solution. The most obvious option is for Paramount to debut Thor in IMAX, since it is now being released on the same date that the canceled Spider-Man sequel just vacated. Frankly I wonder if the deal for Iron Man 2 included Thor as part of negotiations. Whether or not IMAX will release Spider-Man 2.0 in the large-screen format when the reboot arrives in 2012 is an open question, but since IMAX and Warner seem to have patched things up after the Harry Potter 6 debacle, I'd imagine that Sony need only send the IMAX corporate offices a big box of chocolates and flowers. June and July of 2011 alone contains three sequels (Kung Fu Panda: The Kaboom of Doom, Transformers 3, Harry Potter and the Deathly Hallows part 2) whose predecessors debuted in IMAX. Plus we can only presume that Warner Bros and Paramount desperately want, respectively, Martin Campbell's Green Lantern (June 17th) and Joe Johnston's Captain America (July 22nd) to open in the large-screen format, I'd imagine there will be some interesting games of musical chairs come next summer.