Guest Essay - A perspective on Precious from someone who's seen the real thing. 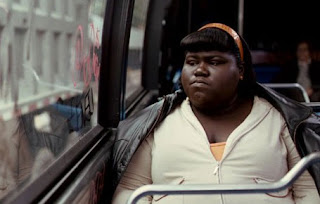 This is a guest commentary/essay from Dana Curcio Shaffer, editor for the Bedford Times Register and wife of DVD Future's RL Shaffer. While there have been countless essays written about Lee Daniels's Precious over the last three months, here is a perspective that I have not read before. I'm a little light on real content due to my work schedule, so lucky for me this happens to be a rather poignant piece of work. Please enjoy.


Precious is a fairytale for those living the hardest of lives

Once upon a time there was a little girl named Precious.

Mild spoiler, she lives happily ever after. Well … as happily as a girl facing such insurmountable odds can expect.

When I saw the ending of Precious: Based on the novel Push by Sapphire, I was angry. It ended too neatly, too happily, too optimistic. This wasn’t how Precious’ story ends. She doesn’t just easily collect all that she loves and walk away from the destructive life that molded her. She doesn’t hold her head high with knowledge of a disease she will never be able to defeat.

She just doesn’t. That isn’t how real life works.

I was angry because it let the privileged viewers who watched the movie on their plasma TVs off the hook. It dragged them through the mud for an hour and a half, forcing them to look at poverty and incest and abuse and neglect and making them feel guilty and grateful for all they have.

But then it ends with this lingering idea that if someone is strong enough and really, really, really wants it, they can just pick themselves up by the bootstraps and build a somewhat decent life, no matter what atrocities have been committed against them. There’s always going to be some well-off, beautiful school teacher there who sees the potential in a troubled child and will take the time to make a billion phone calls to connect that child with the government assistance she needs. No need to lose any sleep over it. Your tax money is taking care of the problem.

But then it dawned on me. This movie wasn’t made for me or the middle-to-upper class people most likely to watch it.

It was a fairytale for all the Preciouses of the world.

Throughout the movie, Precious dreams of being a movie star, a singer, just anyone famous and loved really. That is her ultimate fairytale ending.

But it is Precious’ life that should be the dream for other little girls like her.

Precious acts as an infomercial of sorts for those who have been pushed to the fringe of society. The movie whispers to the downtrodden, “Psssst, there are alternative schools you can attend, social workers can provide some protection if you open up to them, there are monetary rewards available for passing literacy tests, there are halfway homes to help you transition to a better life. And don’t think you’re too dumb or too abused or too burdened. Look at Precious, if she can do it, you can too.”

But sometimes accepting this help is the hardest thing for girls like Precious.

You see, I knew a Precious. She was my cousin. She and four of her siblings were taken away from her mother – ultimately for neglect, but mental abuse, and very likely physical abuse, existed as well. Her mother was court ordered to have a tubal ligation because she kept having children to increase her welfare check and food stamp allotment.

Real-life Precious was young when she was taken away from her mother, but not young enough. She never recovered from those early years of her life. We were nearly the same age, Precious and I, so I never really fully knew all that happened to her. If it was half as bad as what happens in this film, it was far too much for anyone to endure.

She was placed into foster home after foster home, and as she grew into her teen years, she was constantly running away from those homes, either to the streets trying to hook up with a guy or back to her neglectful mother, whom she moved back in with as soon as she turned 18.

Her attachment to the woman who ruined her life will always baffle me, though I suspect the desire to have your mother accept and love you is strong and primal. Perhaps stronger than really, really, really wanting a good life.

And like Precious, my cousin was far too young when she had children. Hers however were by choice, unlike in the film. My cousin already knew the thing it took Precious time to learn: that her babies could be the source of the unconditional love she had so desperately been searching for. And she loved them in return with a voracity I didn’t think possible from someone who had received so little herself.

It was that love that ultimately killed real-life Precious. She had a severe form of Type I diabetes that caused complications in her first two pregnancies. Doctors warned her she should not have any more children. Yet she was as excited as could be when she successfully got pregnant a third time.

Seven months later, she went into a diabetic shock that killed her. The baby was removed just in time.

Now those children are in the custody of the very monster whose lack of love drove real-life Precious to her own death. Just a month after she died, her mother was bragging about how many food stamps she was receiving because she was taking care of the children. Well, technically the children are living with a friend because my aunt’s apartment is filled with black mold. But the checks and food stamps come all the same.

And that’s how the story really ends. I wonder if real-life Precious would have watched this movie. It’s possible — she loved Mariah Carey, though I think Glitter was more my cousin’s tempo than Carey’s moody, overwhelmed social worker role. Would it have made a difference? Will it make a difference for anyone else?

Maybe not, but every little girl deserves a dream. And Precious is a dream that is actually within reach for many who might believe there is no hope for them at all.
Posted by Scott Mendelson at 3:54 PM