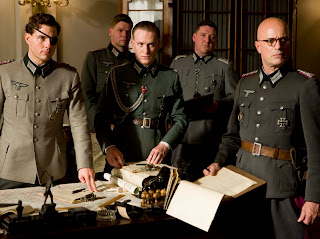 Films that are based on true stories of failure and/or disaster can often make superior suspense yarns then those whose outcome is theoretically unknown. If the film can trick the audience into forgetting that they know the story already, it is a sure sign that all is well. Furthermore, tension can be explicitly built into the foreknowledge of doom, where the suspense comes not from ‘will it all go wrong?’ but rather ‘how will it all go wrong?’.

A bit of plot: Bryan Singer’s period suspense tale Valkyrie concerns the last of over a dozen separate plots to assassinate Adolf Hitler during the reign of the Third Reich. The plot that is presented here is unique because it was the only one that specifically dealt with what to do after Der Führer had been killed. Colonel Stauffenberg (Tom Cruise) has just been seriously wounded on the battlefield in Africa near the end of the war. Fed up with Hitler’s various tyrannical misdeeds, at the expense of Germany’s honor, Stauffenberg soon finds himself aligned with an elite inner circle of trusted Nazi officers who seek a common goal and a common ideology. Together, they hatch a scheme to not only kill Adolph Hitler, but to use an existing contingency plan (‘project Valkyrie’) to take complete political power in Germany and negotiate an end to the war.

Singer takes this little known piece of history and turns it into a tense, ensemble caper picture. As the plan unfolds, the picture begins to resemble a 1940s version of Mission: Impossible. Like the feature film variation, Tom Cruise plays the ‘point man’ of sorts, while the supporting cast nervously does their part to ensure the successful treason at work. Since the failure of said plot is a historical given, writers Nathan Alexander and Christopher McQuarrie (the latter teaming with Bryan Singer for the first time since The Usual Suspects) smartly concentrate as much on the aftermath of said plot as the build-up.

While this is certainly a star vehicle for Tom Cruise, the supporting cast of elders gets their moments to shine as well. Kenneth Branagh’s initial scene, involving Bill Nighy and a duplicitous case of wine, is a true armrest grabber. Tom Wilkinson shines as a power-hungry commander whose loyalties shift per the given occasion. Terence Stamp has a weary, beaten down sense of foreboding defeat, almost cursing himself for resorting to treason and murder. Carice van Houten appears briefly as Stauffenberg’s wife; apparently because Tom Cruise and Bryan Singer liked Paul Verhoeven’s Black Book as much as I did. It should be noted that each actor is permitted to speak in his or her natural accent, but it works surprisingly well as you stop noticing after the first five minutes (ala- The Hunt For Red October, Tom Cruise speaks his first several lines in German and then slowly segues into English).

Whether this will be ‘Tom Cruise’s comeback vehicle’ is irrelevant. It is every bit as good as most commercially-minded Tom Cruise pictures (think The Last Samurai or Minority Report) and reminds viewers that, personal issues aside, Cruise is one of the biggest movie stars of the last fifty years for a reason. He is a solid actor, has uncommonly good taste in material, and continues to work with the very best directors possible. It’s cool to do so now, but the young Cruise using his star power to work with challenging filmmakers like Martin Scorsese and Oliver Stone was a new or reemerging idea in the 1980s. That he surrounds himself with veteran actors like Stamp and Branagh shows respect for the film as a whole, rather than merely his own screen image (just as casting Phillip Seymour Hoffman as the villain in Mission: Impossible 3, knowing full well that Hoffman would easily steal the movie and the critical huzzahs, shows a certain courage).

Valkyrie just misses out on being a great film (it’s no Black Book), but it easily merits mention as a good one. The third act has far too many scenes of nameless troops racing around to apprehend other nameless troops, and the scenes with Cruise and van Houten drag the pace of what should be a tight procedural thriller (more emotional impact is gained from fleeting glimpse of family photos than from any family bonding scenes). But the set pieces are tense and logical, and the story allows Singer to literally use the ‘bomb under the table’ bit that Hitchcock discussed as an archetypical suspense scenario. Singer and Cruise have made a fine historical pulse racer that is surprisingly satisfying and tense. Before Cruise’s 2005 couch-jumping antics, it was taken for granted that a Tom Cruise thriller would be at least this good. Valkyrie is every bit as good as you remember a Tom Cruise movie being, back when you still liked Tom Cruise.

Posted by Scott Mendelson at 1:59 PM