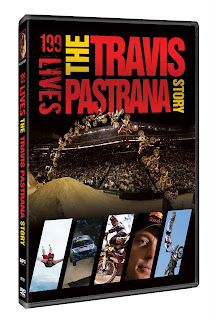 To this day, Tin Cup still maintains its place as the sports movie with the most surprising and exciting climax. If you recall, the 1996 Ron Shelton picture ends with Kevin Costner on the 18th hole in first place for the title at the PGA US Open. However, after missing a (literal) long shot and landing in the water, Costner’s Roy McAvoy refuses to simply take the water penalty and move his ball to the other side of the pond that separates his current position from the green. Again and again, the ball goes into the water, but McAvoy would rather make that shot and lose the Open then simply give up and end it with a short putt.

Travis Pastrana, it would seem, has the same mentality. Time and time again, we see him almost sabotage himself on the dirt bike race track where he flourished. Torn between the strict linear race and the freedom and risk of freestyle jumping, Pastrana often blows races that he should have one, for the chance to try a random jump along the track. But then, when you’ve been motorcycle racing since you were four, competing since 14, and you’ve already base-jumped the Grand Canyon several times since your eighteenth birthday, the potential for boredom is certainly plausible. And it becomes quickly apparent that Mr. Pastrana is the sort of person who would rather lose (and lose badly) at something new and challenging than win at something that he’s already exceptional at.

199 Lives is a straight, no-frills documentary concerning the life of Travis Pastrana, currently considered one of the premier talents in the dirt bike motor cross circuit. Frankly, my knowledge of motocross begins and ends with the 1986 Nintendo game, Excite Bike. So while I am not the intended audience for this feature, it is a worthwhile glimpse into a culture that I know oh so little about. The title likely comes from the incredible cornucopia of injuries that Travis has sustained in his life time. He’s broken his wrist seven times. He’s had eight knee surgeries on the right knee and seven surgeries on the left. He’s separated his shoulder three times. He’s had at least twenty-five concussions. I can only wonder how his body and mind will react should he actually survive to old age.

The feature is pretty much a talking-heads affair, with friends and family sharing their memories and thoughts on the X-games superstar. His father is presented as a relatively hard man, not without love, but with the mindset of an army drill instructor. He’s an avowed atheist, while his wife is a true believer, and one of the highlights is a brief back and forth on their respective theological beliefs.

The film never really passes judgment on its person of interest. No one really tries to sell the idea that he is a hero, nor is he condemned for some of the consequences of his constant need for speed (he once nearly killed himself and two friends driving a car into a tree at 135 miles per hour). He is simply a person who excels at the sport which always came naturally to him.
The film comes up short only in the area of context. There is little mention of his fan base and almost no recollections from sports pundits or sports historians. Although I do not expect such a specialized documentary to explain the complete rules and history of motor cross, a little historical and factual background would have been nice. And, curiously, aside from breath taking scenes of Travis literally motor biking into the Grand Canyon and parachuting to safety, there is actually very little footage of him racing and jumping (although the DVD special features more than make up for that deficiency).

For those who already posses a genuine curiosity in Travis and the world of motor cross, this 84 minute documentary is worth a gander. But for those unschooled in the realm of dirt bike racing and dirt bike stunts, it is an unnecessary diversion. It will not make a fan out of you if you aren’t a fan already.

The DVD:
The feature is presented in 1.85, anamorphic widescreen. The picture is certainly not reference material, but the hi-def video is more than watchable. The lone audio option is English 5.1, and there are sadly no subtitles or captions.
The bonus features are actually a nearly 30 minutes longer than the feature itself. Most of it is comprised of various races and stunts that make up the short career of Travis Pastrana. There is a twelve minute video where Travis counts down his ten favorite stunts or racing moments. There is a two-minute clip of general reminiscing, and several minutes of Travis’s X-Games highlights (note – there is a 3-minute Easter egg on the “X” in X Games in the sub menu for this feature). The biggest special feature is a compilation of nine medal-winning X Games moments. This feature runs a whopping 83 minutes. The video quality on all of these bonus features is adequate and the aspect ratios are varying.

Final Note – If you are a fan of the sport or the man, 199 Lives: The Travis Pastrana Story is more than worth your time, if only for the ample collection of highlights in the supplemental section. But it offers little insight or context for non-fans.