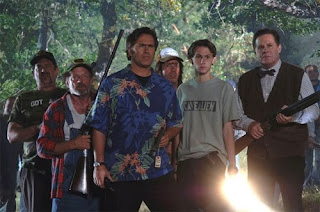 It seems that the tale of the self-depreciating actor is almost becoming a sub-genre all its own. Granted, the idea of a famous actor spoofing or commenting on his screen image is not new. Films as varied as In A Lonely Place, The Shootist, The Cable Guy, and Punch Drunk Love have allowed big screen icons to deconstructing their most famous cinema personas, often placing them in a real life context to show how they come up short in our world (although, the recent films have come not at the end of a career, but at its peak). But in the last several years, we’ve had a major variation on this idea. Not content to merely play variations on their screen personas, we’ve had several actors explicitly playing themselves, or satirical versions of themselves.

Which brings us to My Name Is Bruce, the latest self-parodying film to allow a somewhat on the rocks movie star to rebound by wallowing in their own flawed career. Following in the footsteps of Being John Malkovich (obviously Malkovich wasn’t on the rocks, but one of the best jokes concerned how everyone knew who he was, but no one could name any of his films), Pauly Shore Is Dead, and the recent JCVD (as in Jean Claude Van Damme), My Name Is Bruce stars legendary C-movie star Bruce Campbell. Long known for his cult stardom and his appearance in geek classics like Evil Dead, Campbell has long struggled for some level of respectability and mainstream employment. While he occasionally shows up in small roles in mainstream pictures (Serving Sarah, Sky High), he has long toiled in the z-movie straight-to-video/DVD genre for most of his career. Several forays into series television have garnered solid reviews but few viewers. If you recall, Fox pinned its hopes in 1993 on the Friday night 8pm sci-fi western The Adventures Of Brisco County Jr, while thinking little of its 9pm companion, some toss-off called The X-Files.

With his square-jawed good looks and somewhat cartoonish speaking voice (when he’s doing his stock character), Campbell probably would have been steadily employed in the old studio system days. But today, he gets by on the hero worship of his fans (with whom he has maintained an unusual level of communication), and bit parts from friends like the Coen Brothers and Sam Raimi. This is not to say he is a bad actor. For example, he more than held his own on a two-part guest role on Homicide: Life On The Street back in 1996 (‘Justice’ parts 1 and 2). And he has found a perfect home for his wise-ass shtick as a paunchy, colorful ex-spy on the USA series Burn Notice. Perhaps aging out of his Clark Kent looks will allow him to flourish as a character actor in a way his gee-wiz disgruntled hero routine never did (his devil-may care attitude works better with a solid beer gut).

But, directed by and starring Mr. Campbell as himself, My Name Is Bruce is not the project that will open the doors to a new kind of career. A token amount of plot: In a classic Three Amigos/Galaxy Quest situation, the faded Z-movie actor is kidnapped by a young boy in Oregon, who has accidentally unleashed a mythical monster. Believing that his screen idol is the only one who can save the town, the Jack tricks Campbell into believing that the whole thing is simply another movie project. Things proceed pretty much how you’d expect.

Since I’ve never met the man, I cannot say if this jack-ass loser version of Bruce Campbell is accurate, but I’m guessing that it’s an approximation of what he fears that he has become on his lowest days (stuck making the zero-budget Cave Alien 2, he hits on the leading lady, yells at his fans, and pushes a wheel-chair bound man into traffic). But Campbell has plenty of fun aping his screen persona and his life as a z-movie god. None of the remaining cast really stands out, but none of them particularly hinder the project either. The obvious lack of production values are actually a plus in a film like this, as the cheap special effects capture the goofy charm of a 1950s sci-fi adventure. There is no real plausibility to the proceedings, but I’ll assume that wasn’t the point (is there really any reason for young Jeff or eventually the townspeople to think that Bruce could help them?).

In the end, My Name Is Bruce is a love-letter to the fans who have kept the man afloat, the ones who saw Serving Sarah just for him, and the ones who ranked this movie at 7.7 on IMDB (a whopping 67% gave this film a perfect 10). If you’re a Bruce Campbell fan, then nothing I say would dissuade you from seeing this one in the first place. If you’re not, I suggest you try watching Burn Notice first. But the movie works as well as it needs to for the audience it was intended for. It’s certainly not as plodding as Bubbo-Ho-tep (in which Campbell played an aged Elvis, sharing a nursing home with Ossie Davis as John F. Kennedy) and several third act bits made me laugh (I particularly appreciated Campbell’s response to being given his trademark chainsaw). My Name Is Bruce can be read as a man coming to terms with the career that he has been dealt, or it can be read as simply a trashy B-movie directed by the man who knows best.

Posted by Scott Mendelson at 8:34 AM