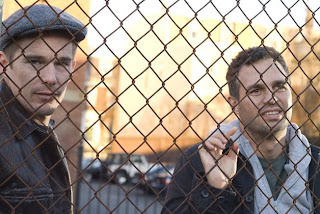 What Doesn’t Kill You is a movie that at times feels like a remake of countless other films. It is yet another biographical story of a lower-class Boston family and the problems with falling into a life of crime. But, as Roger Ebert always says, it’s not what it’s about but how it’s about it. The film overcomes the déjà vu with uncommonly strong acting, and a low-key realism that provides a stronger emotional response by refusing to delve into melodrama.

A bit of plot – This film is the allegedly autobiographical story of writer/director Brian Goodman. Brian and Paulie (Mark Ruffalo and Ethan Hawke) are best friends, having grown up on the south side Boston. As happens to all too many in that area, they eventually turn to a life of petty crime, as a means to scrape by. While Paulie is a wild-eyed and somewhat hardened criminal, Brian is attempting to make a life that includes his wife (Amanda Peet) and their children. However, set backs and unexpected developments threaten to derail Brian’s attempt to leave the life behind and earn the respect of his children.

As is often the case, Mark Ruffalo’s naturalism raises this movie to a higher level, to something outside of cliché. For the last several years, he’s excelled at grounding the various romantic comedies he’s starred in, be they good (13 Going On 30) or bad (Rumor Has It). His general dramatic work has given an extra shot of credibility to otherwise fine pictures (Zodiac, You Can Count On Me). He is one of the few actors that automatically makes a movie better just by appearing in it. This is the closest thing he’s had to star vehicle and he does not waste the opportunity. This is an Oscar worthy performance and one of the very best of the year.

This is not to say that the rest of the cast does not hold up. Ethan Hawke again does solid supporting work. Ironically, this is the second Ethan Hawke movie in a row (after the brutally intense Before The Devil Knows You’re Dead) that opens with a seemingly botched robbery and then proceeds to flashback to the beginning). Amanda Peet also has a natural grief that honors the material. She is heartbreaking as she watches her relatively decent husband struggle to be reliable and trust worthy despite the obstacles in his way. Even the kids who play Brian’s children have a few moments worth noting, especially a late scene where Brian asks his older son what he has to do to win back his respect (the answer is devastating in its simplicity and as a study of low expectations).

The other thing that makes this picture stand out is the last third of the film, which deals not with the clichés of crime and thuggery, but with the near impossible task of rebuilding a life after a stint in the pen. Brian and Paulie both end up in prison, and Brian’s daunting attempt to redeem himself, and make a live for his family, is heartbreaking in its blunt bleakness. This is relatively uncharted territory for bottom of the food chain crime dramas, and this portion is genuinely fascinating and compelling. What Doesn’t Kill You doesn’t chart that much new territory in its first two acts, but a relatively original third act makes the film worth seeing as a story.

Story telling aside, the film is still filled with terrific, low-key performances that make the movie, at the very least, an acting treat. Ruffalo is always worth watching, as he’s quickly becoming one of my very favorite actors. Amanda Peet gets meatier material than she’s had in awhile and Ethan Hawke is solid too. Donnie Wahlberg, who co-wrote the film, has a fun cameo as an embittered cop who keeps an eye on Brian post-prison. It's not exactly a stretch for him, but the more talented, less famous Wahlberg brother is always welcome onscreen.

Once again, had this solid, adult drama been released in the spring or the summer, it would have likely stood out instead of being buried in the award derby. But it is certainly worth the time for fans of the genre and the actors. And, for general moviegoers, it is worth seeking out for a brutally honest, achingly realistic, and emotionally compelling look at the other side of petty crime – the slow, painful path to legitimacy.

Posted by Scott Mendelson at 9:50 AM

I really want to see this flick. HUGE fan of Ruffalo and of late, Hawke has been on fire.