A look back at Harry Potter part II: The Chamber of Secrets stumbles with far too much time to do far too little. 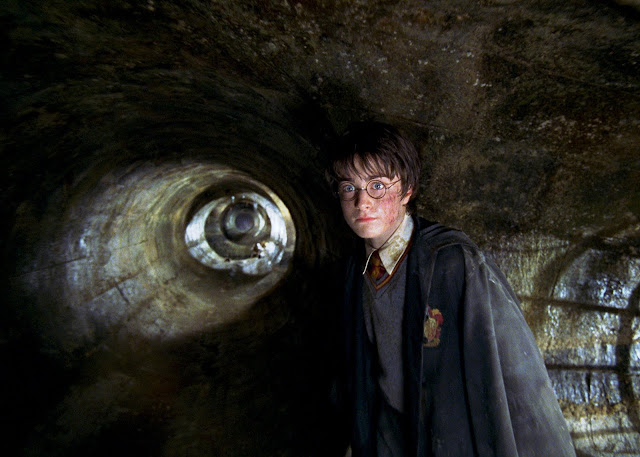 This will be a six-part retrospective on the Harry Potter film series, covering films 1-6 (I think most Potter fans can remember the one that came out eight months ago...).  This essay will be covering Harry Potter and the Chamber of Secrets.

Harry Potter and the Chamber of Secrets is not one of the best films in the series.  It is arguably one of the lesser books as well, although I enjoyed that book more than most.  But both the book and the movie accomplished the same feat: they made me feel right at home upon arriving back at this world, and reaffirmed that I would be returning again and again.  But looking objectively at the second film, there is a distinct lack of an emotional core.  It lacks the thrill of introduction and it lacks the highly personal stakes that start to reveal themselves in the next installment.  As a result of these comparative deficiencies, it is far-too long a film considering how little ground it has to cover (to be fair, I watched the extended cut, which runs nearly 3 hours long).  Of all the films in the series, Harry Potter and the Chamber of Secrets most closely resembles 'just another episode' for Harry and his pals.  In X-Files terms, it was a 'standalone', as opposed to a 'mythology' episode.  But it remains an entertaining romp in good company, and it represents a genuine leap in terms of visual effects and intensity of action.

The film's core plot is more than a little similar to the first film's caper.  Once again, Harry and his pals have to unravel the mystery behind a fiendish conspiracy of sorts, and once again the main perpetrator is revealed to be some form of Voldemort.  What the film does have that separates it from the pack is a solid look at the history of Hogwarts itself.  We get a decent look at why certain kids are sent into different 'houses', as well as some bits of icky history that of course tie into the present.  It actually occurred to me that there is a nearly 40 year gap between the flashback events in Chamber of Secrets and the murder of Harry Potter's parents that opens the first film.  Not to get all 'prequel' on you, but that would certainly be interesting terrain for Rowling to play around with in some avenue or another.  But I digress...

The film is noteworthy mainly for the introduction of three major characters.  Ironically, the most colorful of these, Professor Gilderoy Lockhart (Kenneth Branagh) is the least important of them.  He does little other than give Harry an alibi when a mysterious force starts attacking the school, and (unless I am mistaken) he is never mentioned again after his mind is erased in the climax.  More important is the introduction of Lucious Malfoy (Jason Issacs), the malicious father of Draco and arguably the 'face of the Death Eaters' until Voldemort returns in Goblet of Fire.   The film benefits immensely from having a genuinely evil antagonist, and Radcliffe makes the most of his opportunity to go man-a-mano with the striking Brit (if you're a woman who likes older British rogues being droll and viciously sarcastic, this series is basically porn).  The climactic standoff between Harry and Lucious is pretty great, especially now that we know they improvised the exchange (it's the first time Harry Potter looks and sounds like a classic romantic hero).  The other major character is Dobby the house elf.  While he is indeed annoying, the CGI creation (voiced by Toby Jones) works because every character in the film openly acknowledges what a tool he is.  I am personally partial to his efforts at self-flagellation.

The film does indeed have a solid narrative arc for Harry Potter himself, even if I must cheat by including footage from the 'extended cut'.  Point being, the theme running through this film is a compelling one.  The student body slowly starts to suspect that Harry Potter himself is responsible for the petrifications of his fellow classmates.  It's the first of an ongoing series of events that periodically leave Harry asking what makes him and Voldemort so different after all?  The eventual answer is a worthwhile one, as Dumbedore simply asserts that it is the choices we make that make us who we are.  Still, that narrative suffers from the inability to have the students be in any real danger.  Both because it's a kid-friendly fantasy film and because there is no way the school could stay open after a genuine killing spree, the monster unleashed by the Chamber of Secrets keeps failing to actually kill anyone.  It plays fair with explaining why none of the victims actually perish, but you can see the film straining to basically create a murder spree without the actual murders.

Still, the film works again as a character portrait amongst Harry, Hermione, and Ron, even if the adults get an even shorter shrift this time around.  And the special effects are vastly improved this time, with a genuinely exciting Quidditch match that pits Harry against Draco.  And the action finale itself is surprisingly violent and scary.  An attack by a horde of often photo-real giant spiders will have arachnaphobe hiding their eyes, and the giant snake that is unleashed by the Chamber remains a genuinely awesome and terrifying menace.   Harry's showdown with the Basilisk is shot and edited like a genuine creature feature, with no punches pulled for the younger audiences.  And, it must be said, this is one of the few films in the series where Harry Potter actively reacts to a problem not of his making and genuinely saves the day.  Later films would have him unwillingly bringing Voldemort back from the dead, getting trapped in the Ministry of Magic with a crowd of Death Eaters, and/or hiding while Dumbledore is murdered, but Chamber of Secrets features a rather proactive Harry Potter doing battle with evil and saving the lives of his friends and school chums.

The film does drag moreso than any of the other films in the series, owing mainly to having nearly three hours to tell an almost entirely plot-driven story.  The excitement of the finale, the more confident acting and direction, and the superior technical credits must be balanced alongside a weaker story and an attempt to tell a murder mystery in an environment where no one can actually die.   I must objectively admit that it is probably the weakest of the Harry Potter films.  Still, it remains a solid adventure picture that advances the character (if not the plot) along and paves the way for darker, grimmer adventures that lie ahead.

In the book, Lockhart is again mentioned in Order of the Phoenix when Harry and his friends visit Mr. Weasley post snake attack at St. Mungo's. They inadvertently stumble across Lockhart there in recovery. Doesn't add anything to the plot, just a bit of comic relief in a very dark book.